We expect our H2 to be far more profitable than that of last year: Sudipta Suri, Radio Mirchi

Radio Mirchi without a doubt is one of the biggest and most successful private radio networks. The Covid-19 pandemic has hugely impacted radio business as it did had on other media businesses, but with the festive season coming in, there are signs of some green-shoots of growth in the space.

The solutions business of Radio Mirchi has contributed to about 34% of the total revenues in FY20 which clearly means that radio now is more than just the medium it used to be.

Sudipta Suri, the young veteran and the National Marketing Director at Radio Mirchi (ENIL) spoke to Medianews4u exclusively on what’s hot at Mirchi and the plans for the festive season.

How has your experience been at Radio Mirchi so far?

It has been a great experience with immense learnings and personal development. Having worked in an MNC and an Indian manufacturing company in the past, media was a new venture for me. But Mirchi has been amazing from the very first day, boasting of a dynamic workforce, an open work culture and a flat organizational structure allowing you to interact and engage with members across functions and levels. It nurtures an environment that allows creative minds to flourish, encourages thinking outside the box and provides you with the freedom to pursue new ideas. You can make what you desire of your career at Mirchi and I am a quintessential example of that – within 3 months of my joining, my potential was recognized and I was moved from a regional to a national role; and today,1.5yrs later I was made National marketing head, and with expanded responsibilities, I’m National marketing director 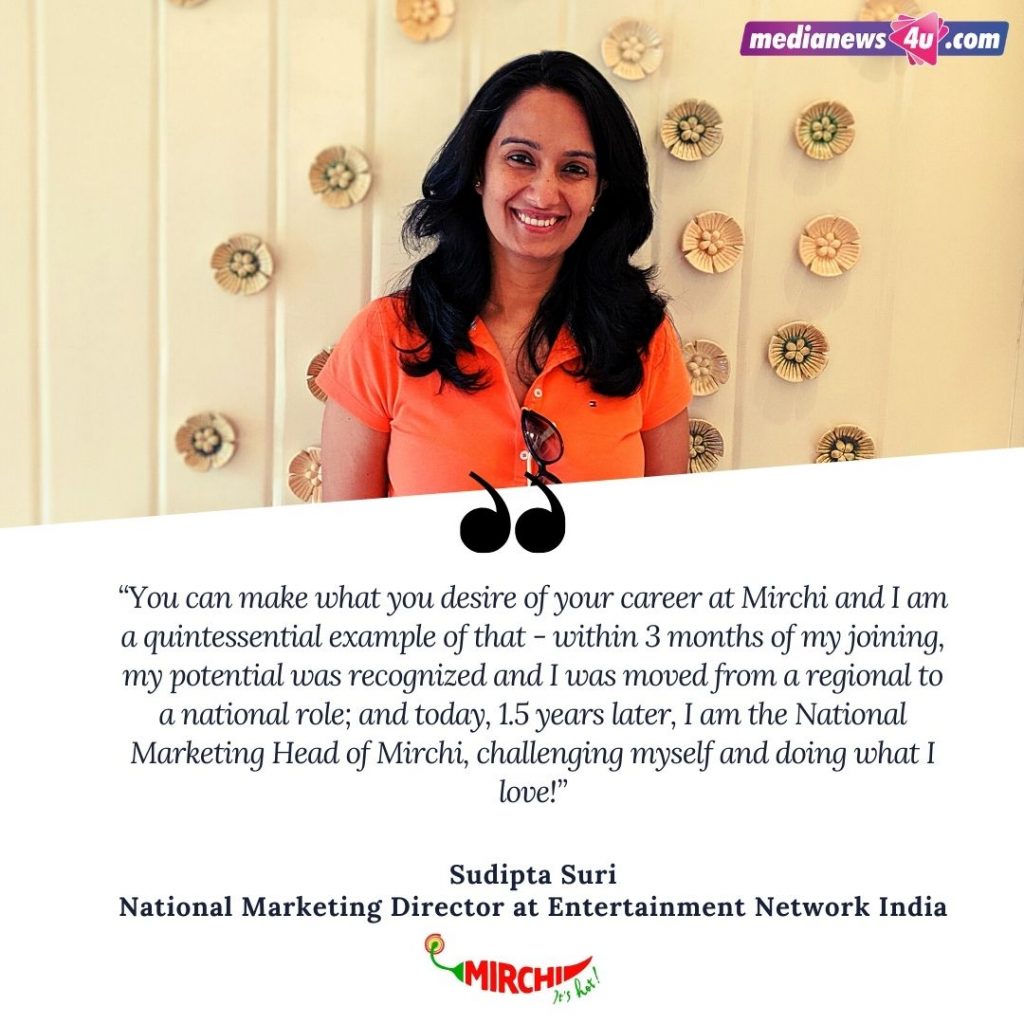 How has Radio Mirchi been performing all through the lockdown? Both from the business and listenership perspective. Any numbers that you can share?

The lockdown hit most industries. However, there has been a nearly 30% increase in radio listenership as per a study done by our industry body, Associations of Radio Operators for India, and is now almost comparable with the viewership of TV. This was aided by the fact that people turned to media in a big way during the lockdown, for content and entertainment. A factor that particularly favored radio was its “credibility”. The “credible/highly credible” score for radio is 41%, which ties with internet, and is much higher than any other formats like TV, newspapers and social media. While Radio, like every other business and sector, did witness initial de-growth during the lockdown; as the country moved into the unlock mode, our business grew sequentially month-on-month. A huge enabler for this growth is the brand’s business diversification beyond radio, way before the lockdown. On the back of this expansion, we are seeing a lot of traction for idea-based multi-media solutions amongst advertisers.

For Mirchi, “solutions” is about 1/3rd of its total revenues, of which our digital products are doing very well. We are leveraging our strong digital presence of 10+ million YouTube subscribers, 15+ million followers on social media platforms, 20+ online radio stations and several hours of podcasts as well as capabilities to curate original content to cater to our clients. With an exceptional reach across 63 markets, we also offer impactful “hyper vocal” solutions using our “hyper local” assets.

In line with this growth trajectory, we expect our H2 to be far more profitable than that of last year.

How has Radio Mirchi innovated in providing groundbreaking and quirky brand solutions to brands and advertisers during this lockdown?

Lockdown or no lockdown, Mirchi has always curated solutions with its groundbreaking ideas. As the whole world grappled with the pandemic, Mirchi invested behind finding new opportunities by leveraging its creative might, local reach, celebrity access and strong digital presence. Two of the most recent examples are the nationwide Dhara campaign and nationwide release of a multi-starrer Gulabo Sitabo on an OTC platform. The Dhara campaign was one-of-its-kind as Mirchi with its extensive network of RJs across cities created a memorable anthem, which aimed at bringing the nation together during testing times. The anthem created numerous impressions on the digital space and created waves on the new-age online mediums.

The launch of Gulabo Sitabo was yet another testament to the fact that Mirchi can actually turn the tide when the odds are against it. With no releases taking place in theatres, the film industry was facing a crisis of a different kind. Amazon Prime, thus, released India’s first-ever mainstream film on an OTT platform. Mirchi with its various digital and radio assets created conversations and a buzz even before it released.

With the changing times, Mirchi is all set to redefine the entertainment space by rediscovering itself in the new areas.

How did you keep up the content library during the lockdown?

We undertook innumerous activities to keep up the momentum and provide relevant content to our discerning consumers, throughout the lockdown. For instance, in Bangalore we highlighted several COVID-19 innovations such as a non-invasive helmet, an air ambulance with an isolation pod, and an ICU made in shipping containers. We also spoke to citizen welfare groups, experts and officials through voice notes, zoom calls and Insta-Lives. Additionally, we created content around busting COVID-19 myths via a character called Sachguru.

In Maharashtra, we launched a digital campaign called Mirchi Lock & Roll where we created 509 videos in 3 months, including interesting classes like guitar class, storytelling, and a Vitamin P video through which we gave our viewers a dose of positivity. Through Times of Mirchi, we gave important news of the day when newspapers were banned. We also went LIVE with Marathi celebrities such as Swapnil Joshi, Sonali Kulkarni, Aditi Pohankar, Savanee Ravindra on our Facebook and Instagram page.

While the global pandemic has impacted the on-ground celebrations, this festive season, the overall fervor is still high. The festive season continues to be a key consumer engagement touchpoint for brands and it imperative for partners like us to be innovative with our solutions. For instance, this year we brought the spirit of Durga Puja to the homes of our audience by organizing one of the biggest virtual Pujo parties of 2020 along with ITC Bingo. It was a three-day long LIVE event with performances from popular artists like Mir & Bandge, Fiddler’s Green, DJ Trio, and others. The event was a massive success with over 500 attendees, as well as celebrity gatecrashers like Monami Ghosh and Darshana Banik.

This festive season, taking cognizance of this current environment, Mirchi has created experiences in a hybrid avatar that satiates the urge to be offline and yet remain in the safety net of virtual entertainment. Creating festive experiences like Mirchi Rock n Dhol, Mirchi Khushir Pujo, Mirchi Shopping Festivals, Mirchi Diwali Carnival, Mirchi Live hybrid, Mirchi House parties and many regional initiatives provides a multi-platform experience to brands and its consumers. Mirchi RJs, influencers, celebrities, radio promotions, music, shopping, offline engagements, prizes and gifts have made sure the spirit of festivity comes alive for listeners, viewers and sponsors during these otherwise troubled times. 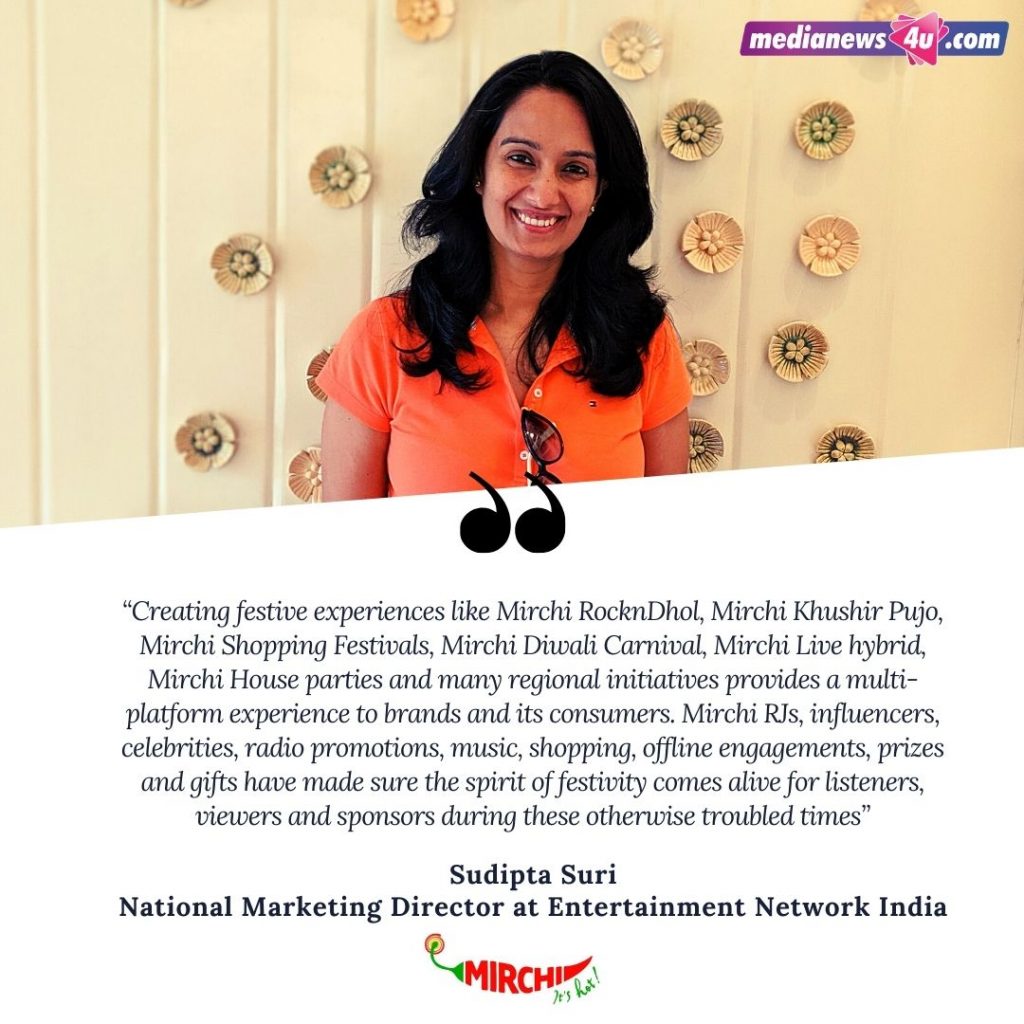 Could you shed some light on the non-radio business of your organization?

Mirchi has always focused on creating several avenues to be a part of the consumer’s life, regardless of the platform of consumption, be it radio, internet, TV or on-ground. In line with this tenet, we have diversified our business and besides Radio, we operate in two big verticals – Mirchi Live and Mirchi Digital. The Mirchi Live business comprises on-ground properties and televised events such as Mirchi Music Awards (country’s only music award in its 13th year!), Mirchi Cover star (a talent hunt for singers) and Mirchi Neon run (a fun run across multiple cities).

Under Mirchi Digital, we have solution for audio OTT, video OTT and social media. With the largest Bollywood YouTube channel that has 5mn+ subscribers, Filmy Mirchi cuts across all three platforms. We also have 24 online radio stations on Gaana.com which give the platform more engagement than any other playlist (over 45min average engagement per user). Furthermore, Mirchi Originals is our original content creating arm, which has come up with exceptional content such as Kalyanam Conditions, Basement Company and many more such series in various languages. We also have a strong play across social media and Video OTT in 8 regional languages such as Tamil, Bangla, Gujrati, Punjabi, Telegu, Marathi, Kannada and Malyalam.

In FY20, FM radio made up just 66% of our overall revenues. The other 34% came from our “solutions” business. 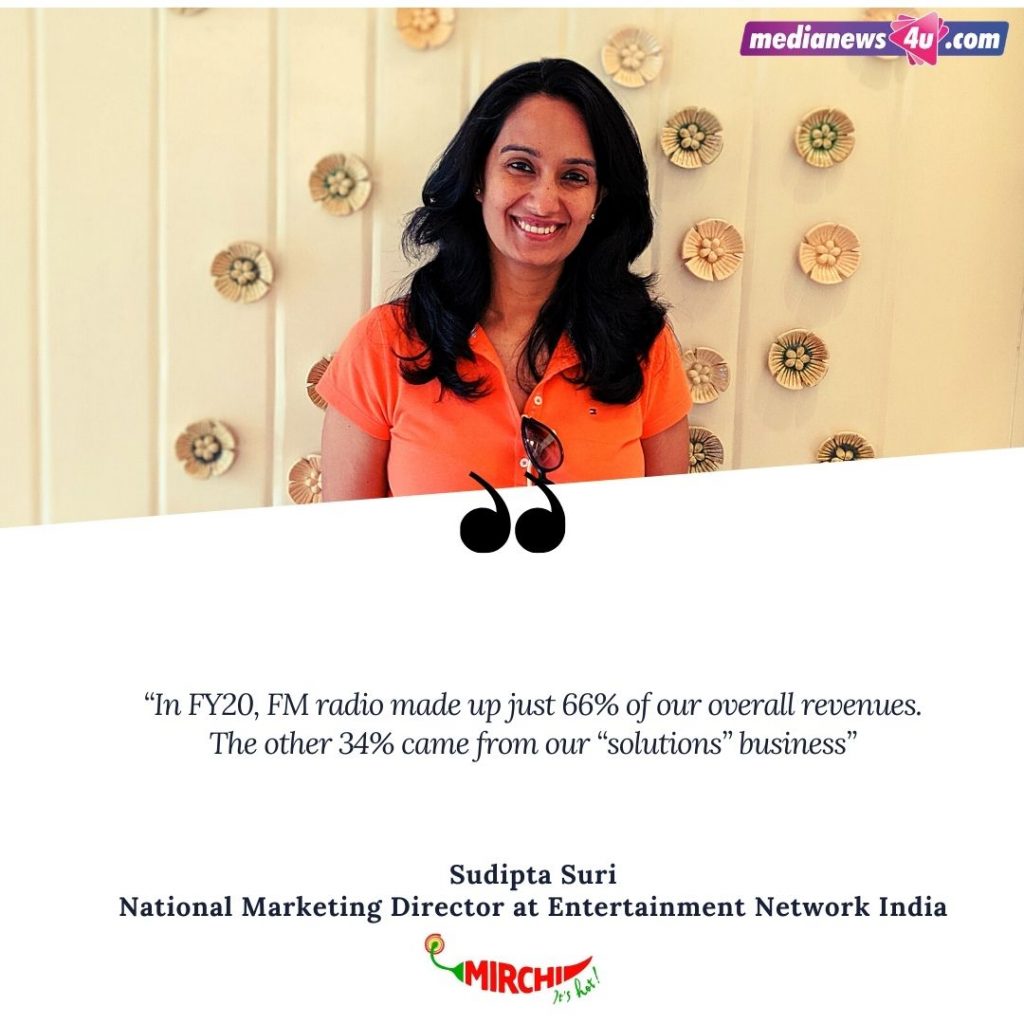 What’s been your go-to strategy to compete with all the radio and non-radio competition around you, with online streaming of both music and video at an all-time high?

In FM, we have always been the No. 1 radio station since IRS started in 2012. And the growing music streaming industry bodes well for us as the experience of a curated radio station receives greater response as compared to any playlist and that’s the reason we get such high-level engagement on Gaana.

With our Original Content cutting across languages and with 300+ in-house content curators putting their energies behind innovatively ramping up our YouTube and social media presence, Mirchi is also a part of the growing video industry of India. With the likes of Mirchi’s RJ Naved taking the humour-based channel, Mirchi Murga, to 2mn+ subscribers on YouTube and our Mirchi Bangla page hosting the popular Sunday Suspense and OMG that garners 1.22mn subscribers, we are only growing.

Pune: Nihilent the global consulting and change management organization using a human-centric approach to problem-solving has launched a new multimedia...

Mumbai: Amid the COVID-19 pandemic, when immunity boosters are driving people crazy, one would not be able to assimilate the...