Wattpad India, launched in 2018 and it hosts stories in 11 different languages including Hindi, English, Bengali and Marathi. It also launched Wattpad Studios and Wattpad Books, which is helping to transform entertainment and publishing by using data-backed insights to turn these stories into books, films and TV shows. The Brand Partnerships division helps brands build deep engagement with Gen Z consumers.

Recently Wattpad has been acquired by Naver, South Korea’s internet conglomerate and home of WEBTOON™, a leading global digital comic’s platform, at an estimated USD $600 million.

Devashish Sharma, Country Head, Wattpad India in an exclusive chat with Medianews4u talks about the growth of Wattpad and how storytelling has become the new buzz word for brand associations.

Wattpad was established in India in 2018, what got you to lead the India team? Tell us a bit about Wattpad’s journey in India.

Wattpad has been available for many years! 2018 marks new investment in the region and our growing team there, but we’ve been in the market long before that. I joined the company as Head of Wattpad India in 2018, and since then, we have made significant investments in the region. 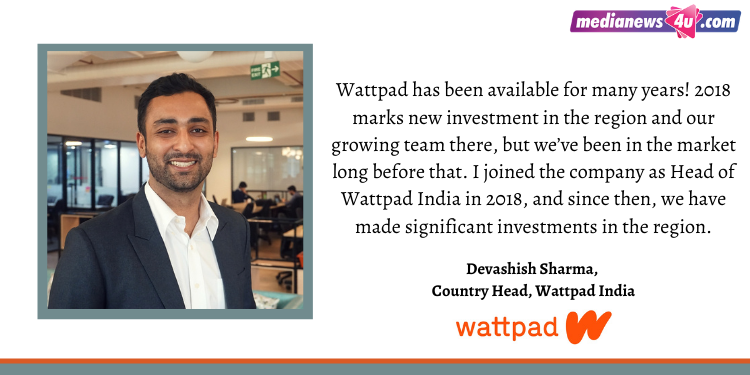 The Wattpad community in India is now made up of more than three million Wattpad people, and they spend an average of 37 minutes per day reading and writing on Wattpad. Indian Wattpad authors write in more than 10 languages, including English and Hindi.

Storytelling is an art, who are the people connected to Wattpad? Which languages have seen the most traction?

Wattpad is a global community of more than 90 million people, with people writing in more than 50 languages! Writers on Wattpad include world-renowned, best-selling authors with millions of reads to up-and-coming indie writers working on their first novel.

English and Hindi are the most commonly used languages on Wattpad in India, followed by other regional languages like Malayalam, Tamil, Urdu, Bengali and Marathi. 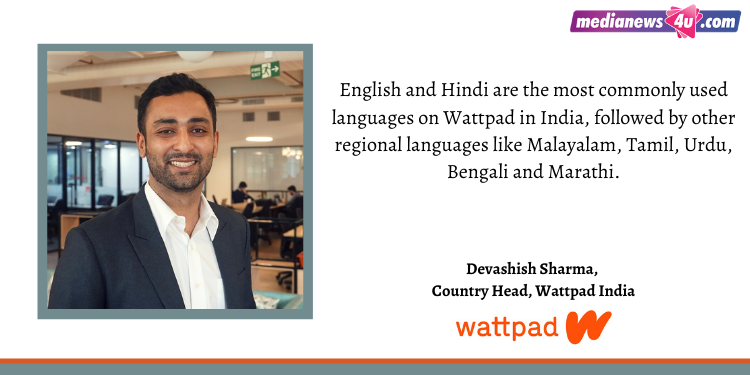 In India, writers like Aanchal Budhiraja and Hermyne Khaling and making a name for themselves, while Neil D’Silva’s What The Eyes Don’t See has more than 27,000 reads on Wattpad.

You don’t have to look very far to find a hit TV show or film that started on Wattpad. Hulu’s hit show Light as a Feather started on Wattpad before we produced the series with AwesomenessTV and Gramnnet. And After by Anna Todd also started as a story on Wattpad, gaining more than 1 billion reads before becoming an international indie film sensation. The first two films, After and After We Collided were released in 2019 and 2020, and two more sequels in the franchise have already been green-lit.

Is the App available in Android & IOS? Is it subscription-based?

Yes, both Android and iOS users can download Wattpad, register for free and begin reading and writing immediately.

Along with millions of free stories, we also offer Paid Stories and the Wattpad Premium subscription, which gives users access to some of the most diverse, creative writing in the world, ad-free. This is available for only INR 369 per month. 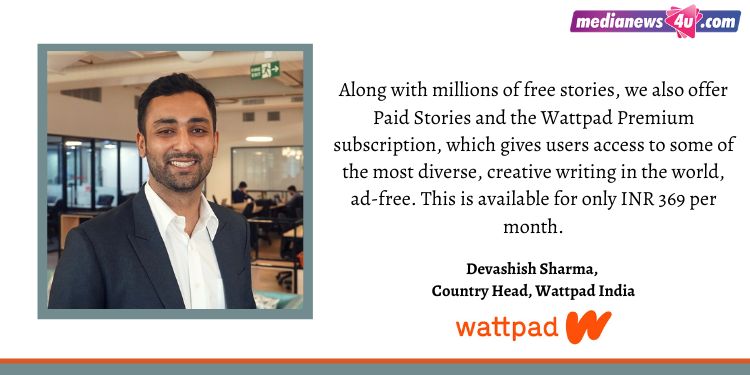 How have you gone about marketing this App?

We have several brand partnerships in India. In 2019, we announced a strategic partnership with Times Bridge India, the global investments and partnerships arm of The Times Group, which has been critical in expanding the local community of Wattpad users in India.

Most recently, we partnered with the Government of Maharashtra to host a creative writing contest for students. The contest drew more than 1500 entries by aspiring student authors across the state in English, Hindi and Marathi. The entries came from both metros and non-metros such as Jalgaon, Ahmednagar, Diveagar, Dhamodi and more, showcasing the power and ingenuity of young minds across the region.

The Wattpad Brand Partnerships team helps brands to communicate with its target audience, how is this TG identified and how is it marketed by the brands?

90% of Wattpad users are Gen Z or Millennials (between the ages of 13-35), and more than 80% identify as women. Nobody knows Gen Z like Wattpad, and Wattpad Brand Partnerships wants to help brands connect in a meaningful way with this demographic.

From storytelling campaigns and writing contests, the Wattpad Brand Partnerships team allows mission-driven brands to support communities and stories that are important to Gen Z consumers in India and around the world.

We work with the biggest brand on the planet to help them connect with Gen Z in a meaningful way. Just some of our brand partners have included Netflix, Sony Music, UNICEF, Puma, H&M, Unilever, and many others.

Wattpad talks about using data-backed insights to communicate and transform entertainment, can you elaborate on this?

We use a mix of art and science to find and create hits!

Our Story DNA technology uses machine learning, deep learning, and recurrent neural networks to deconstruct stories into their elemental features. Elements like sentence structure, word use, and grammar help us compare stories on and off of Wattpad. These data-backed insights help us find great stories, unique voices, and trends among the more than 1 billion upload that have been written on Wattpad. 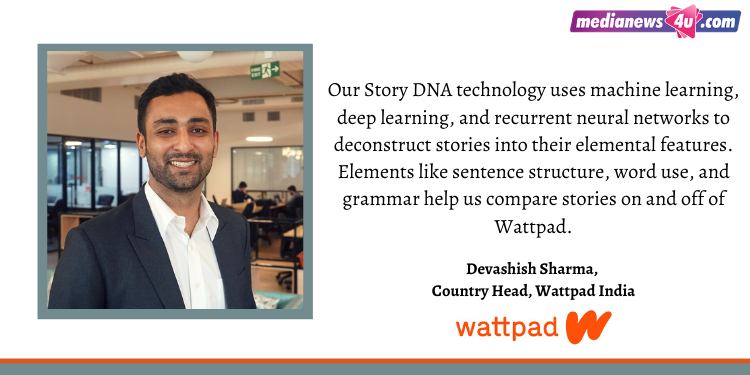 Combined with our content and editorial experts, we are bringing data and audience insights to every form of entertainment and transforming the industry.

What will be your communication/marketing strategy going forward?

Our vision is to entertain and connect the world through stories. This vision drives everything we do.

2021 is a year of growth for Wattpad. We are continuing to improve Wattpad and our community, connecting readers to millions of incredible stories and making Wattpad the best place on the planet for writers to share their voices, build an audience, and make money. 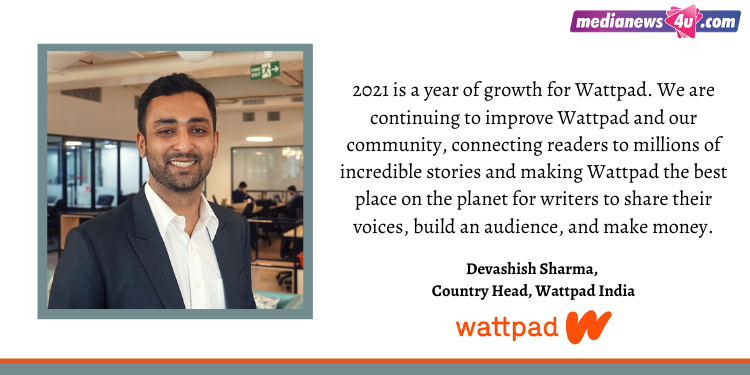 The pandemic saw a huge surge in digital usage. How has Wattpad benefited?

Last March, when the COVID-19 pandemic forced everyone globally to shelter in place, there was a noticeable surge in people consuming more content online — and the same goes for online reading. When people could not access physical books like they used to, many turned to reading online. From January through April 2020, the number of new stories written on the platform grew by 151 percent. April 2020 also saw a 50 percent increase in user sign-ups compared to March 2020. 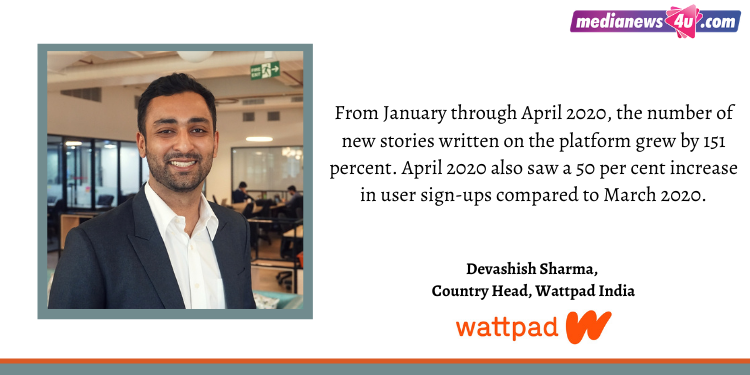