In February, The Advertising Standards Council of India (ASCI) drafted a new set of guidelines to monitor influencer advertising and promotions on digital media. This is to enable consumers to easily recognize promotional content on digital platforms.

We spoke to Manisha Kapoor, Secretary-General at ASCI on the final guidelines and as to how ASCI will monitor violations and much more.

In February, the guidelines were formed, it took 3 months for it to be implemented, was there a study conducted with the stakeholders?

After the draft guidelines were introduced in February, we received an overwhelming response from all stakeholders – influencers, brands, digital content creators, marketing and advertising agencies, industry bodies as well as consumers. We had several listening sessions with them to make it a truly collaborative process. They shared their recommendations and suggestions, which were considered and incorporated into the final version of the guidelines. 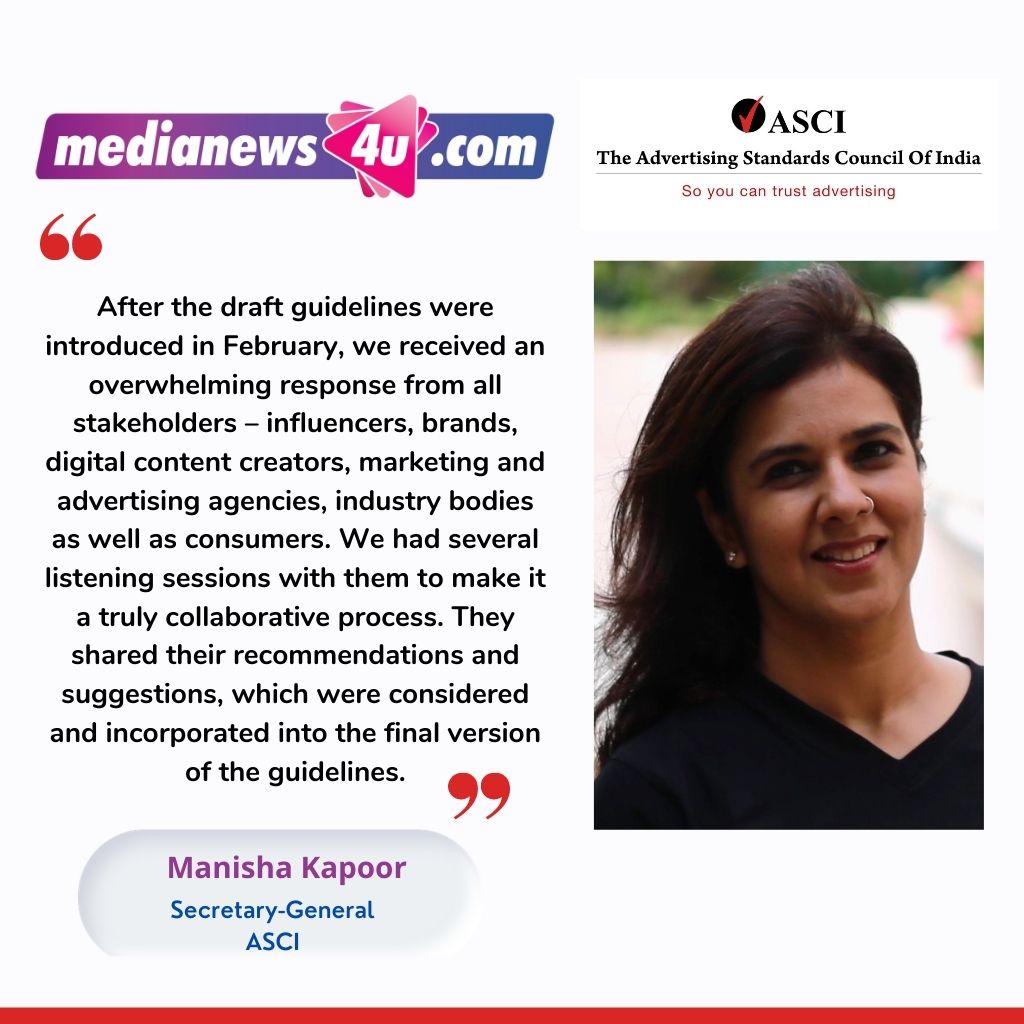 ASCI tied up with Big Bang Social, a leading marketplace for social storytellers, to get India’s leading digital influencers’ views on board. We collaborated with all the top influencers and their representatives, who showed immense commitment to the process.

With the guidelines now enforced, will brands/influencers now have to prominently display whether the content is an advertisement or paid for content?

The guidelines make it mandatory for influencers to label the promotional content they post. As mentioned in the guidelines, disclosure must be up front and prominent so that it is not missed by any consumer. We have detailed exactly how disclosures must be made. If you look at the way consumers are consuming content, transparency is the need of the hour. They have a right to know if the content they are consuming is promotional. Any kind of material connection including barters has to be mentioned as sponsored versus regular content. All this is in line with the idea of responsible influencing.

With these guidelines in place will content on digital platforms be more factual.. your thoughts?

ASCI has not put any restrictions on creativity. So long as the overall content is truthful, fair, decent and honest it will be in line with ASCI’s code. In these particular guideline’s, the emphasis is on disclosure, i.e. to clearly identify whether a piece of communication is a paid for ad. We want to shape a more positive narrative around advertising and influencing. 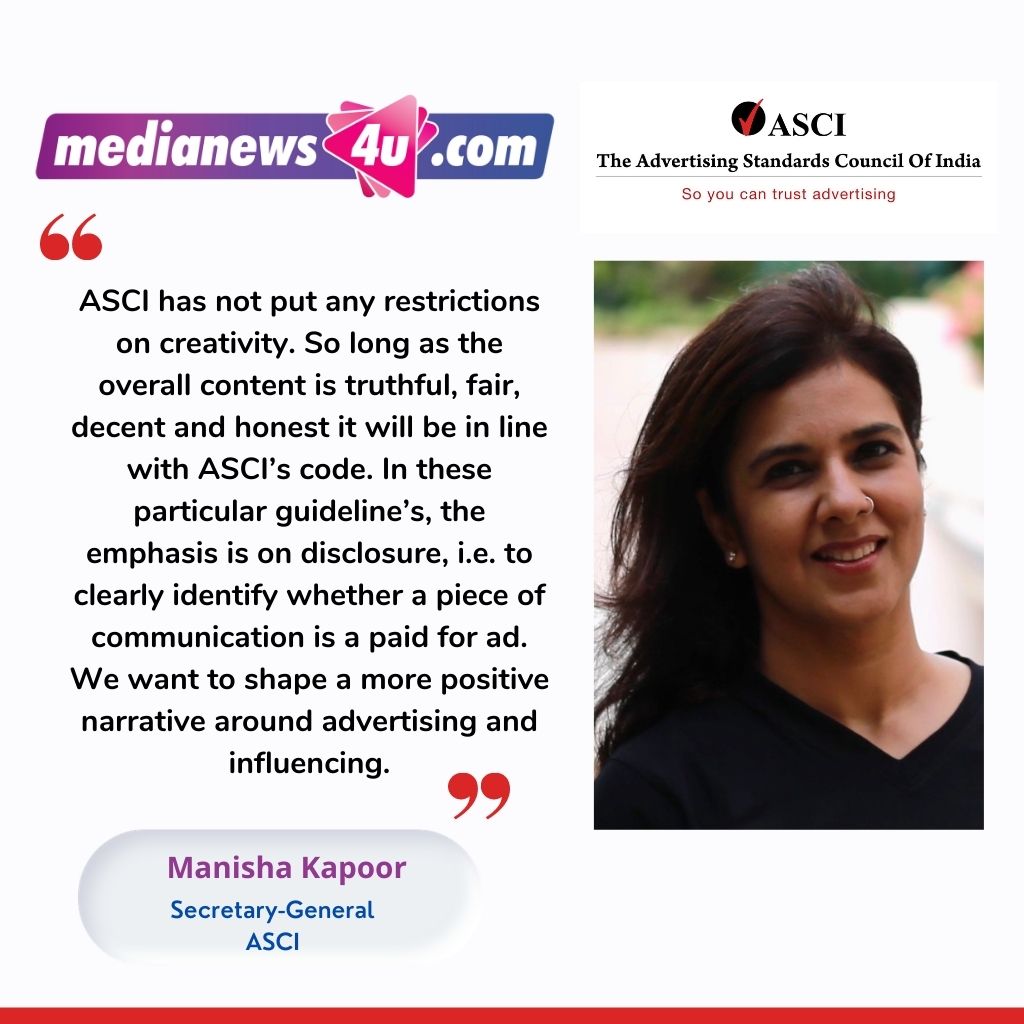 In these guidelines is there a provision in the law to monitor whether an Influencer has full knowledge of the brand /product they are influencing?

Will the forum also have a redressal committee?

ASCI already has a well-established complaint redressal process. The complaints will go through the process that is already established for other kinds of advertising. Let’s say a complaint is registered, and a brand or influencer is found to be in violation of the guidelines. After our investigation, which involves getting the advertiser and influencer’s point of view, the consumer complaints council will take a call on whether the complaint is to be upheld or not. In case the complaint is to be upheld, we would write to the advertiser and influencer and ask them to withdraw or modify the ad. ASCI has a compliance rate of 95%, and we expect a high compliance in this sector. ASCI work closely with the government, and noncompliance is usually escalated to the sector regulator. 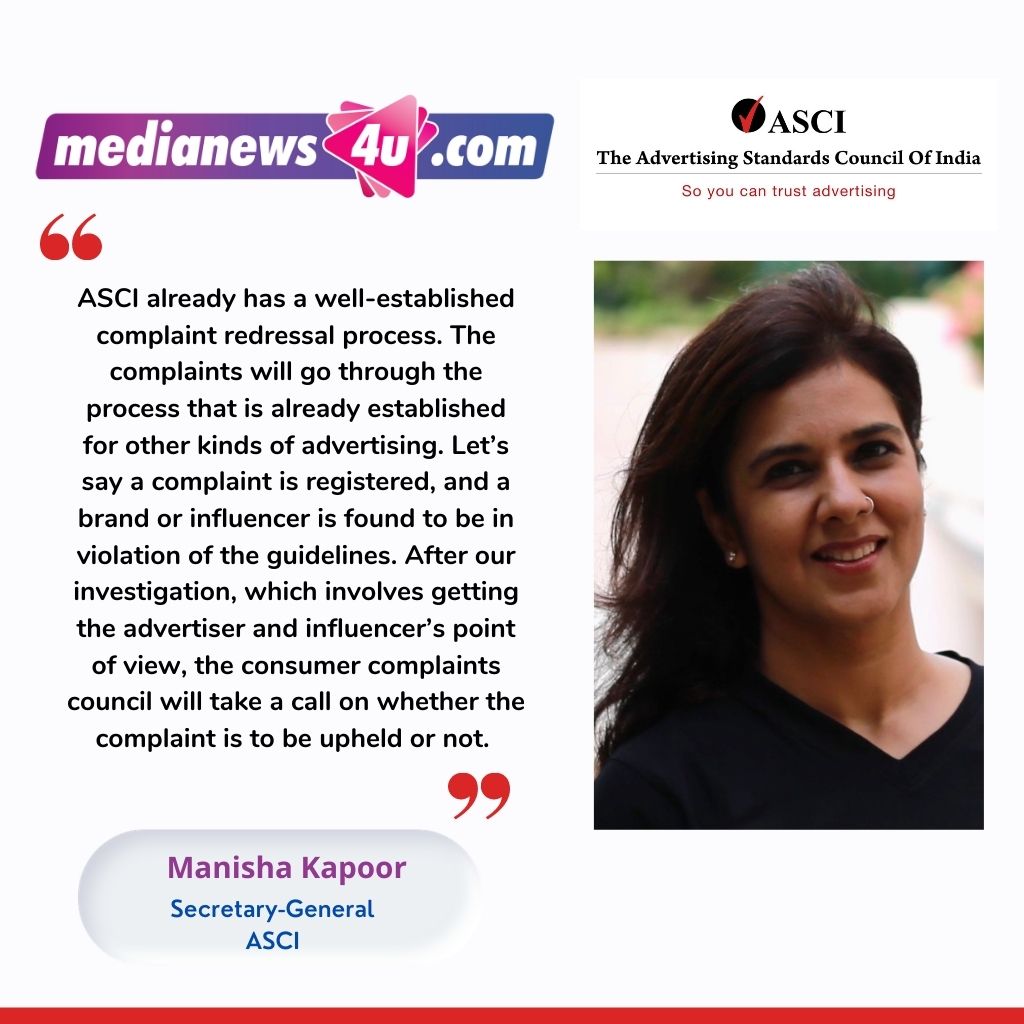 To make all stakeholders more aware of the processes, as well as to create a digital community around them, we have launched the ASCI.Social platform – a one-stop destination for all information related to the guidelines. The digital platform will be interactive with dos and don’ts, FAQs, useful information, etc. Over time, we hope to create a community of social media influencers, consumers, advertisers and talent management agencies.

How will ASCI monitor potential violations of the guidelines?

We have associated with Reech, a French technology provider. The Reech Influence Cloud platform uses artificial intelligence (AI) to identify lack of disclosure on posts of a commercial nature on social media. Machine learning algorithms and pattern searching Regex (Regular Expression) maximise accuracy. As part of ASCI’s increasing focus on digital content, we will continue to deploy advanced technology solutions to keep track of advertisements that violate the ASCI code. 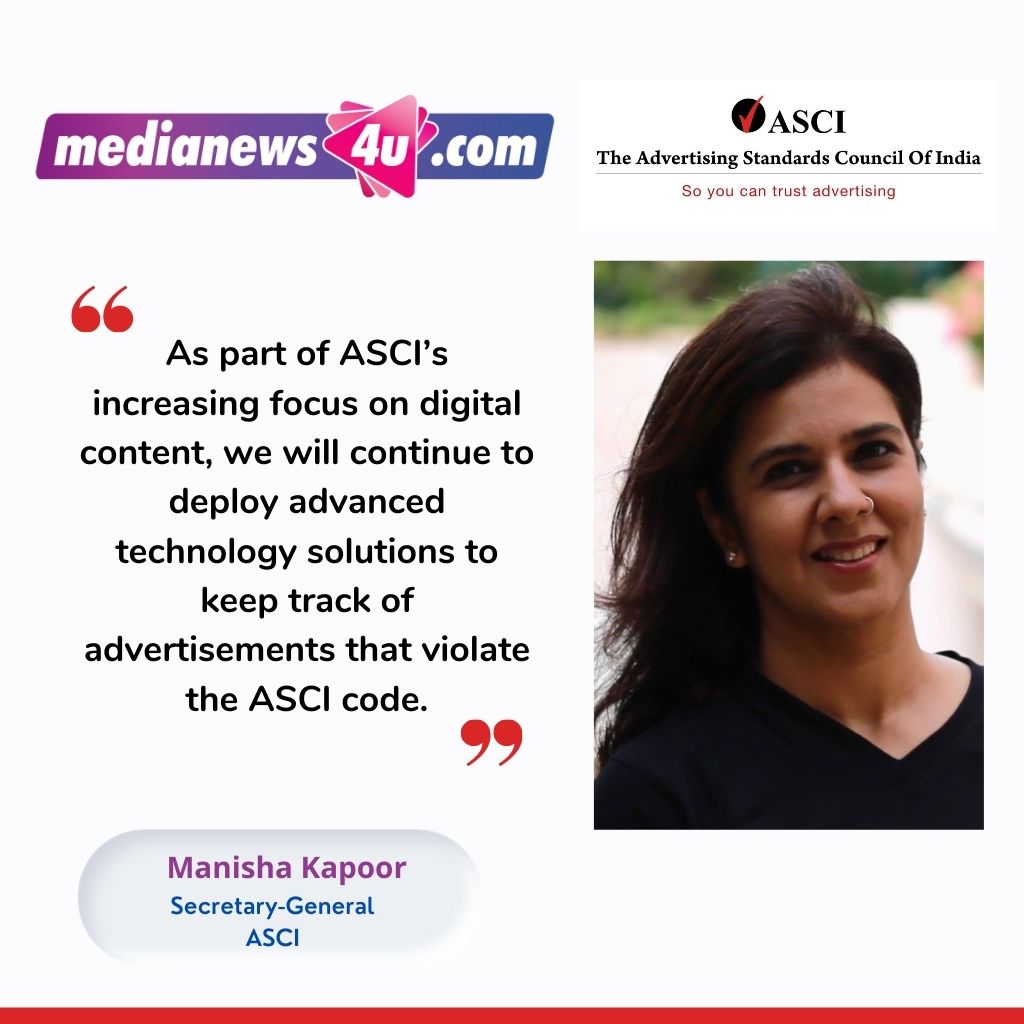 Mumbai: RateGain Travel Technologies Limited, a provider of SaaS solutions for travel and hospitality, today announced that it has entered into a definitive...

Our digital strategy is focused on capturing the heart and mind of millennials at the early stage: Vignesh M, Equitas SFB

New Delhi: Femina, India’s leading women’s magazine, in its September issue features the “Fab 40” women who have raised their...