Will BIGG BOSS 14 see a surge in viewership with the new twists?

Bigg boss is the most popular reality show in the Indian Entertainment genre. Bigg Boss 13 TRP was so high that the show was extended for 4 weeks and still it got the highest TRP during the prime time and became the most successful reality show in India.

But this year it is something else, the show had to compete with the IPL that was being watched by the majority of Indians. For the majority of Indians, Cricket is first love. Because of which the show saw very low TRPs. As per latest statistics, the TRPs of Weekend KaVaar was 1.5. This is in sharp contrast to last year when the comparatively bland episodes were also getting TRPs of above 2.

As BIGG BOSS 13 was a huge it both on TV and on VOOT, everybody was waiting with bated breath for Season 14 TRPs. In BIGG BOSS 13 the weekend KaVaar even touched 4.9!  In Bigg Boss 14 the weekday episodes, are in the range of 1.1 to 1.2. Things seem to have picked up some momentum in the past few days with all the fights between Rahul Vaidya-Jasmin Bhasin, PavitraPunia-Rahul Vaidya and the entry of the wild cards.

This year the show started with the entry of last year’s winner Television’s heartthrob Sidharth Shukla who became popular with his impeccable and strong performance inside the controversial Bigg Boss house. The actor enjoys his huge and crazy fan following across the nation post-winning  BB 13 trophy. Ever since Sidharth Shukla entered the house of Bigg Boss 14 as a senior contestant, he was constantly trending on Twitter as the fans couldn’t stop supporting him and it felt that the viewers were watching this season only for Sid. After completing 2 weeks, Sidharth Shukla along with two other seniors Hina and Gauahar walked out of the house. With Sidharth’s exit, the new TRP list suggests that the ratings have fallen down drastically.

TRP ratings Week 40 of Top 5 shows released, Bigg Boss 14 is not in the Top 5, the weekdays and weekend episodes have grabbed 1.1 and 1.7 ratings respectively. 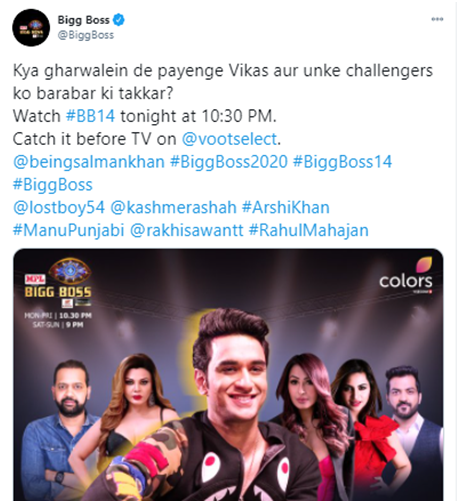 To keep the momentum and to grab eyeballs Big Boss 14 is all set to bring new twists to the show, going with their theme “Ab scene paltega” Salman khan who announced the first finale of the season which is scheduled for next week. The twist over here is the season is not getting over but there will be 5 new entrants into the Big Boss House. The latest promo reveals that mastermind Vikas Gupta is going to join the show with his 5 challengers- Manu Punjabi, RakhiSawant, Rahul Mahajan, Kashmeera Shah and Arshi Khan.  These 5 were the most talked about participants in the house during their stay in different seasons.

This season has not seen much off any controversy or fights among the participants. The viewers are a little disappointed. Will the new twist ensure more viewership for Big Boss?

Pritish Nandy shares his interest on the Bigg Boss show by tweeting for his favourite contestants from season 14. 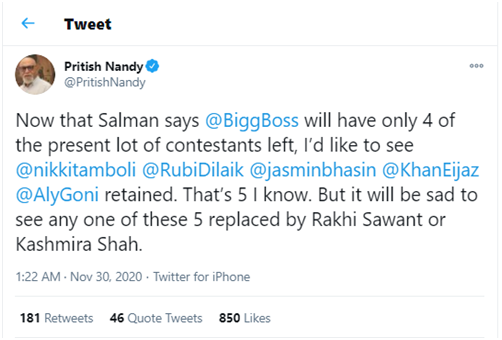 With just one announcement the show has seen a spike in viewership. The question now is what will happen when the challengers enter the Bigg Boss House?

International: S4Capital and MediaMonks announced today its deepening expansion into the PR and communications space with the addition of Low...