On this women’s Day, MediaNews4U.com is acknowledging women leaders of the Media, Marketing, Broadcast, and Advertising fraternity who have given more than expected.

In this segment Women leaders Simran Hoon, Neeta Thakare, Sujata Samant & Shreya Sawant from QYOU Media share their experiences of breaking the gender stereotypes and how they continue to inspire many other women who are true leaders in the making

When I look back to all these years in my life I can say my foundation has been very strong. My mother should be thanked for instilling qualities such as self – reliance, multitasking and determination. Being an army-kid, I have learned a lot from her by observing how effectively she managed the household along with other responsibilities. This has helped me be an independent woman. Hard work and perseverance are the key values budding leaders should inculcate. I look at every new journey is a challenge for me and with my breadth of experience, attitude to challenge the norm and look for growth at every opportunity, I feel privileged to be a part of the few women CEO’s in the industry. 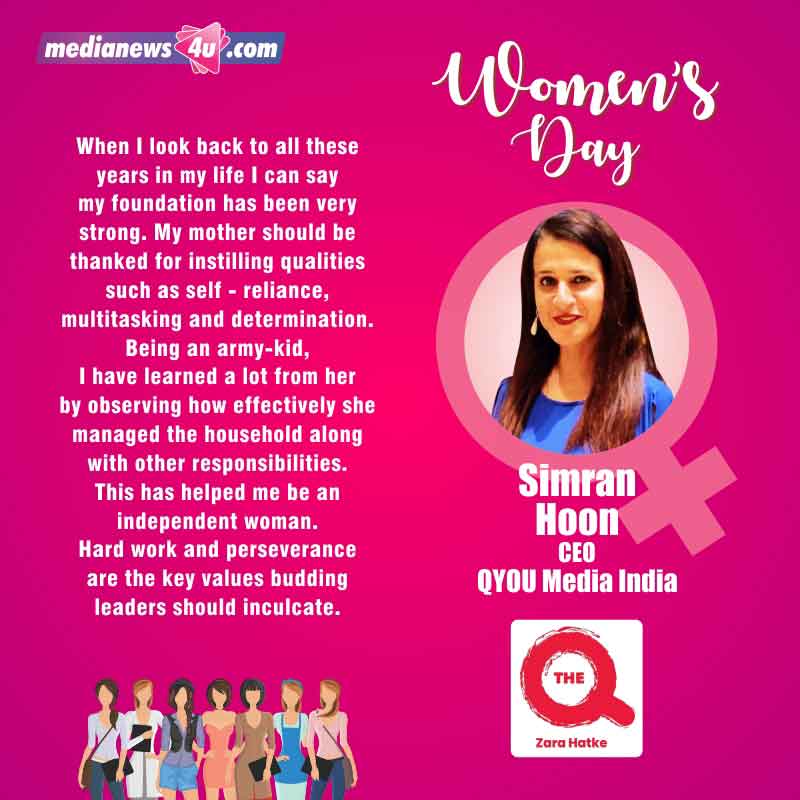 I often get a second look, when I introduce myself! Many even question my function and expertise. My career in distribution did not happen by chance. It was a challenge I had taken 15 years ago. The industry was and continues to be male dominated and an almost closed door for women. Even today, there are only a handful of women in this field who are in leadership positions. What made me challenge myself was the fact that this space was thriving on negotiations that would happen across the table. The seasoned players had learned the trick of the trade while I was embarking on a new learning. There were instances when I almost reconsidered my decision. I was determined to break the stereotypes associated with this area and eventually grew in my role that has also gotten me a lot of respect from the cable TV and channel fraternity. I believe I have been successful in breaking this glass ceiling and this has been one of my most significant achievements in my career. I’ve always followed, learned by example and be the example for the next generation. 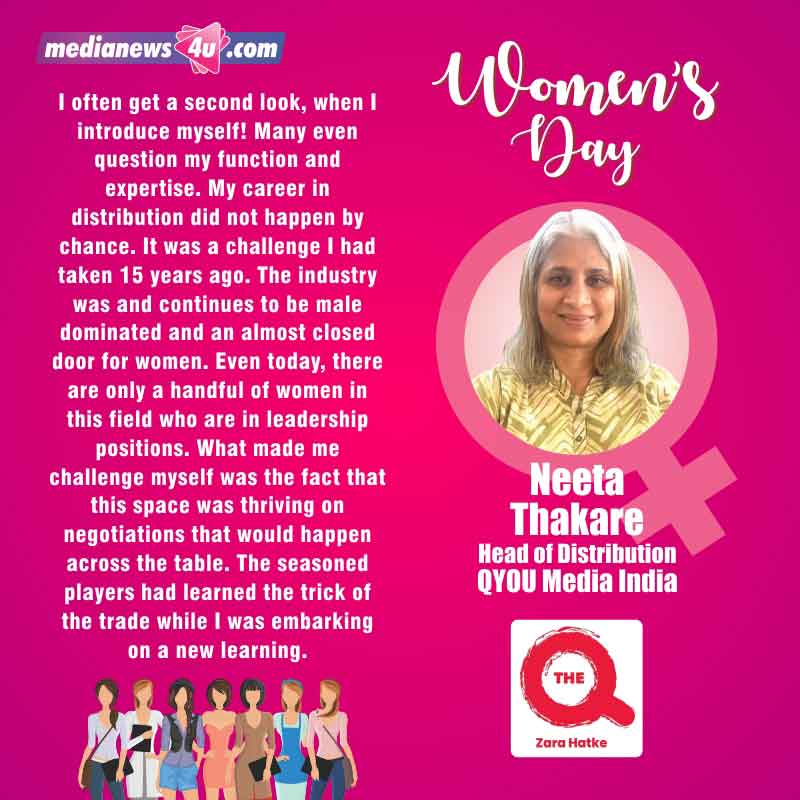 I have always admired women like Indira Gandhi, Kiran Bedi who have carved a space for themselves in the men’s club which also exists in our industry.

I believe by focusing energies that result in good work, it is possible to have more participation and involvement from women and become more inclusive. Moreover, having an inclusive culture is a much richer one – you have different perspectives and thought processes making the system stronger.

Ratan Tata and Sudha Murthy have strongly inspired me as Corporate Leaders; their journeys, beliefs, work across various arenas have inspired me a lot.

My mantra for budding leaders of today is: Always Walk the Talk. I believe in leading by example. Managers, Leaders, I think, need to be ready to get their hands dirty to get a job done, showing ‘how’s it done’ to the team rather than just ‘asking if it’s done’. These are some beliefs which I have put into practice as I grew and continue to grow as a professional; which in turn, I believe have always helped me build a strong and performing team and somewhere led me to inspire them to think like a Leader. 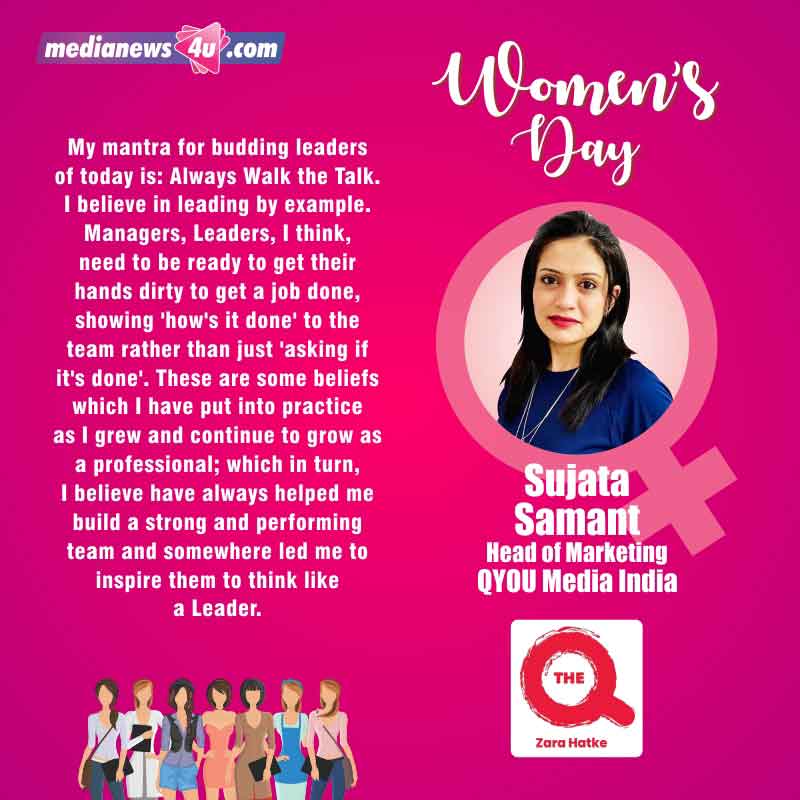 My team here at ‘The Q’ has a perfect gender-balance by coincidence and not by design; however I think the best way for us all and especially Women Professionals and leaders to Break-The-Wall of gender-bias is by starting to not believe in it. When we treat all professionals as ‘only professionals’ and look at them from a single lens of just individualistic-meritocracy is when we will start moving in a direction where gender would not be a deterrent or criteria to hire / evaluate anymore.

Sherly Sandberg, Jacinda Arden, and the recent leadership role breaking the ceiling– Leena Nair are my inspiration throughout my corporate journey. I like this quote by Shreyl Sandberg – “Leadership is about making others better as a result of your presence and making sure that impact lasts in your absence.” As per a new gender diversity report from global financial services company, Credit Suisse the women’s representation on boards in 2015 was a little over 11% and it went up over 17% in 2021. The number of female CEOs globally has increased by 27% though they still only account for 5.5% of the total. In the last six years, India has seen a 6% increase in women’s representation on boards. These figures force me as a HR to further question the dearth of women leaders in India and what measures one can take to support the new generation leaders in India.

As a Head HR at QYOU, my focus is to create a culture which is gender-balanced in their respective domains and to build this we have put together teams based on interest levels, which represents a strong gender-balance ratio of 48:52 % (F:M). In the last few years, I have met charismatic leaders. I consider myself fortunate enough to have encountered such talented, inspiring, and enthusiastic leaders, whom I’ve always found committed to excellence. 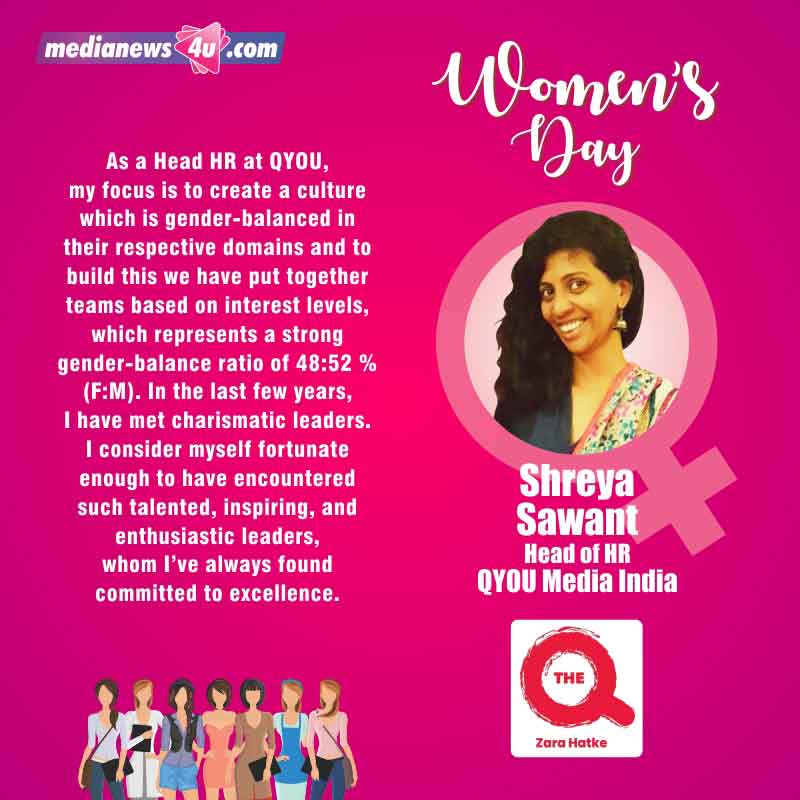 The mantra of my life is: “Learn, Unlearn, and Relearn,” which means we need to be innovative; we need to transform ourselves to become more agile and open to challenges, we need to fail wisely and network extensively and break the bias in the workplace and beyond.

Colors Tamil, Viacom18’s Tamil Entertainment channel is all set to screen the World Television Premiere of Yutha Satham, this Friday, December 2nd at...

MovieMax, a fast-expanding multiplex chain which is part of the Kanakia Group, launches in Bikaner, Rajasthan with promise of maximizing entertainment....