Young consumers are likely to drive streaming growth in India, with a majority planning to increase consumption in the future: YouGov

by Editorial
in Featured, Market Analysis
Reading Time: 3 mins read
A A

Mumbai: YouGov’s new report explores how consumption of media has changed globally in the past 12 months and identifies which media behaviors consumers are planning to stick with in the future.

Data from the whitepaper shows that digital mediums have been the dominant media choices of urban Indians in the past 12 months, and they are likely to dominate their choices in the future as well. Among projected increases in digital media sources are websites & apps (63% are likely to increase their consumption), social media (55%), streaming video (53%) and streaming music (49%). 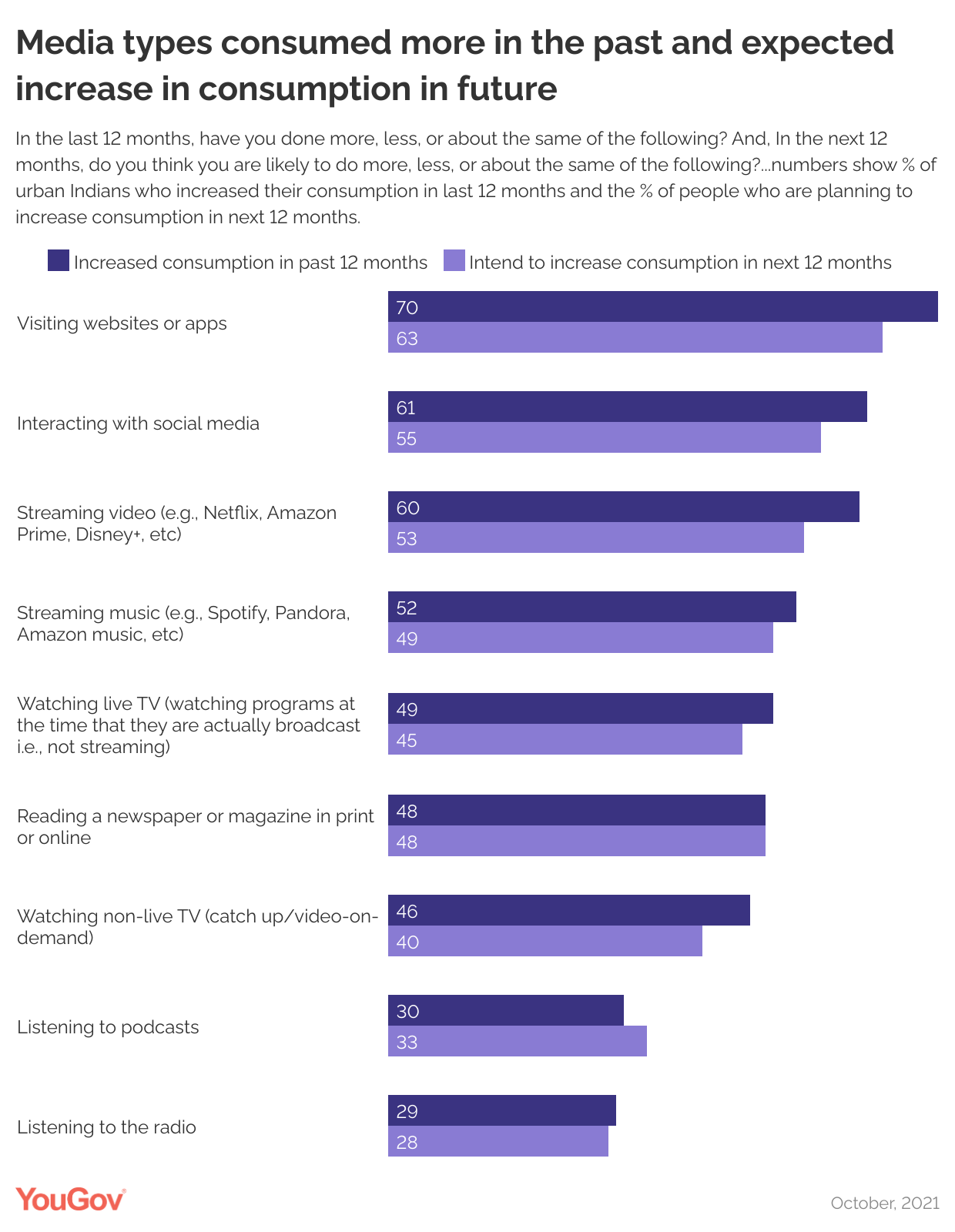 Consumption of streaming video is likely to increase across age groups in India in the next 12 months, with young consumers between 25- 34 years expecting a higher increase in consumption (62%) as compared to those aged 35-44 (52%) or 55+ (41%). In comparison to this, intent to increase consumption of both live and non-live TV is lower among this group- at 50% and 45%, respectively, yet higher than the other age groups. This shows that along with driving the demand for streaming services, younger audiences in India will also dominate the demand for TV content in the future. 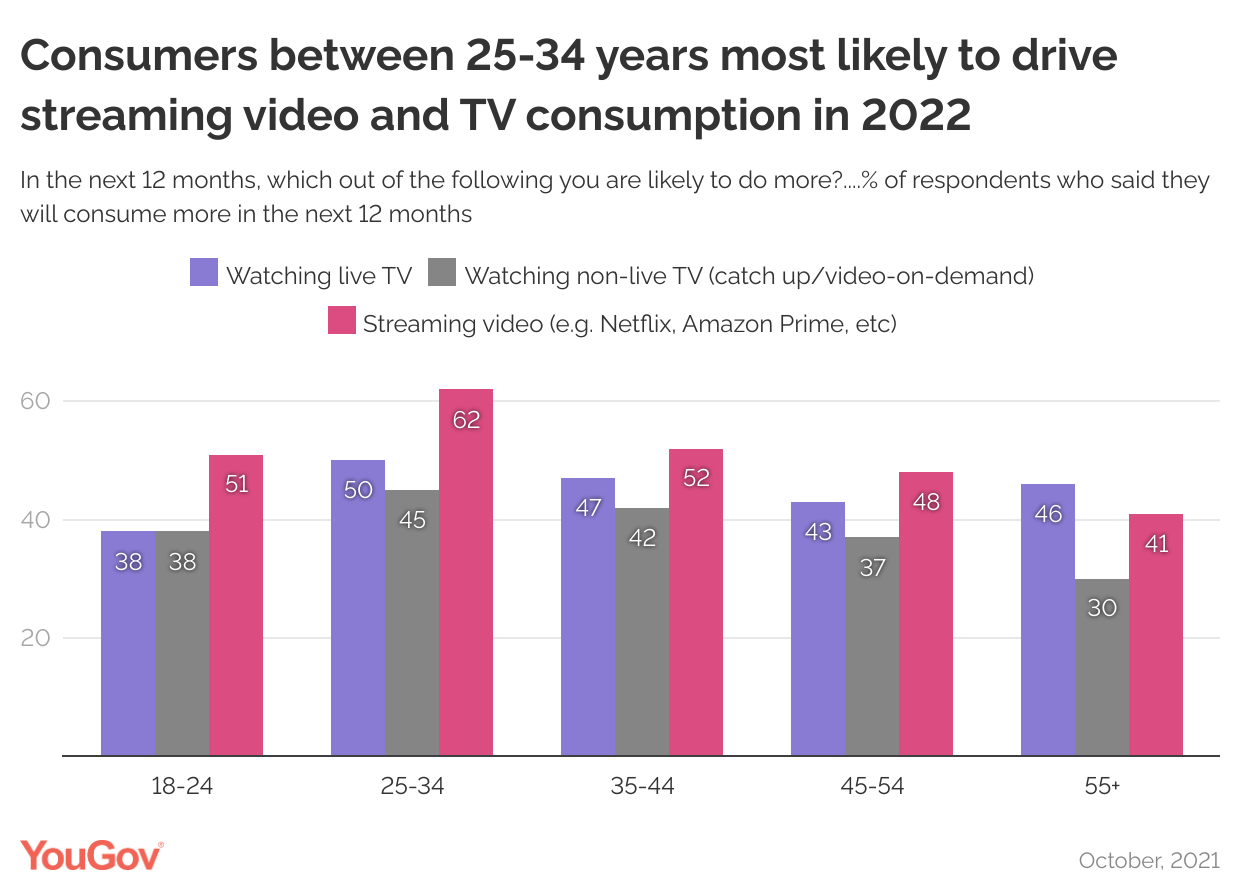 Similarly, within the audio industry, younger generations are set to boost the consumption of streaming music, as well as podcasts. About six in ten (58%) adults between 25-34 years plan to stream more music in the next 12 months, which is higher than the expectations of other age groups.  Even though future consumption of podcasts is projected lower than other mediums, its consumption is likely to soar among young consumers (25-34 years) in the country. When it comes to subscriptions, once again we see the young population taking the lead. Across all age groups, demand for VOD is the highest among consumers between 25-34 years, with almost half (49%) currently paying for, and likely to continue with their subscriptions next year.

In addition to this, one in ten (10%) respondents who do not currently pay, said they might consider paying next year, representing a clear opportunity for growth within this cohort.

Having said that, a considerable proportion are either ‘Cancelers’ (24%)- who currently pay but are likely to cancel next year, or ‘Rejectors’ (17%) – who do not currently pay and are unlikely to subscribe next year. Making investment in better content, more regional content options and as well as subscription price adaptations might help the streaming platforms retain and grow audiences.

Similarly, in case of music subscriptions, compared to all other age groups, a higher proportion of young adults (between 25-34) currently pay for music subscriptions and are likely to continue paying next year as well. There is further room for growth as 14% who currently do not have a paid subscription may consider signing up next year.

Jules Newby, Sector Head of Media at YouGov said, “Our report takes deep dives into the Watch, Listen, Read and Social channels of media consumption. As consumer media consumption patterns continue to evolve and adapt to the pandemic-caused disruption across different regions, our data sheds light on growth opportunities for media planners and brand marketers alike, whilst also revealing which digital trends are likely to stick around in the future, and which global markets and demographics are encouraging this stickiness.

“When it comes to the ‘stickiness’ of consumers’ media consumption behavior, our data suggests that a high proportion of consumers are unlikely to change their media behavior dramatically in the next 12 months. Looking at the growth drivers of media consumption in the next 12 months, all are digital. Video streaming services have further tightened their grip on viewers in the wake of the pandemic and are likely to register the biggest growth in consumption in the coming year.”

Plant-based meats: Non-vegetarians buying in with a conscience

Saj Jamal has returned to SSIMWAVE as Vice President, Marketing as the company is poised to advance the filmmaker-to-fan streaming...

The NEW Shop, a retail company has announced the appointment of Bollywood actor Rajkummar Rao as the brand ambassador. In...