Zee Bispoke completes 2 years today. When the channel was launched it was touted as the go-to destination for Bhojpuri movies, Zee Biskope offers a slew of robust content spread across an array of genres highly popular amongst Bhojpuri audiences such as romance, drama, action, and comedy.

The channel has taken the entertainment quotient up; the channel has launched several blockbuster premieres, movie festivals, and novel viewer engagement initiatives in the last two years. With engagement at its peak, the channel continues to rule the roost at several prestigious award functions having swept a resounding 90 awards across categories.

On their 2nd Anniversary, we spoke to Samrat Ghosh, Chief Cluster Officer – East, ZEEL, and Amarpreet Singh Saini, Chief Channel Officer, Bhojpuri Cluster, ZEEL on the key factors that have helped the channel grow, their marketing initiatives, and much more…

It has been a very eventful year for ZEE Biskope, what were the factors that helped the channel to grow in 2021?

Samrat Ghosh: We launched ZEE Biskope in 2020 as the first curated Bhojpuri movie channel in the category. We believed in serving novelty and innovation at every step as we noticed that the viewer was ready to be treated with elevated offerings in the category but was being under-served. Our No.1 status since launch and numerous viewership, as well as award-winning initiatives since then, are an endorsement that we are on the right path. Amarpreet Singh Saini: We continued this legacy in 2021 as well with the launch of original non-fiction series on a movie channel, novel movie bands viz. Hollywood Tadka where we showcased Hollywood movies dubbed in Bhojpuri/ Hindi and Biskope Talkies where we showcased nostalgic golden era titles, the viewers instantly showed their attention and intention to be more deeply associated with ZEE Biskope. Even in our marketing initiatives we went beyond our marquee ventures and brought emotionally enriched offerings viz. TuChinta Mat Kar Mai and Vratin Key SahaiBaniChathiMayi saw an overwhelming response and respect towards the brand. The continuous pushing of the envelope on newness in the category stands vindicated of the viewers growing appetite to move beyond the commoditized approach in the category and to be served in a more customized and standardized manner, thus ensuring our continuing leadership in the category. 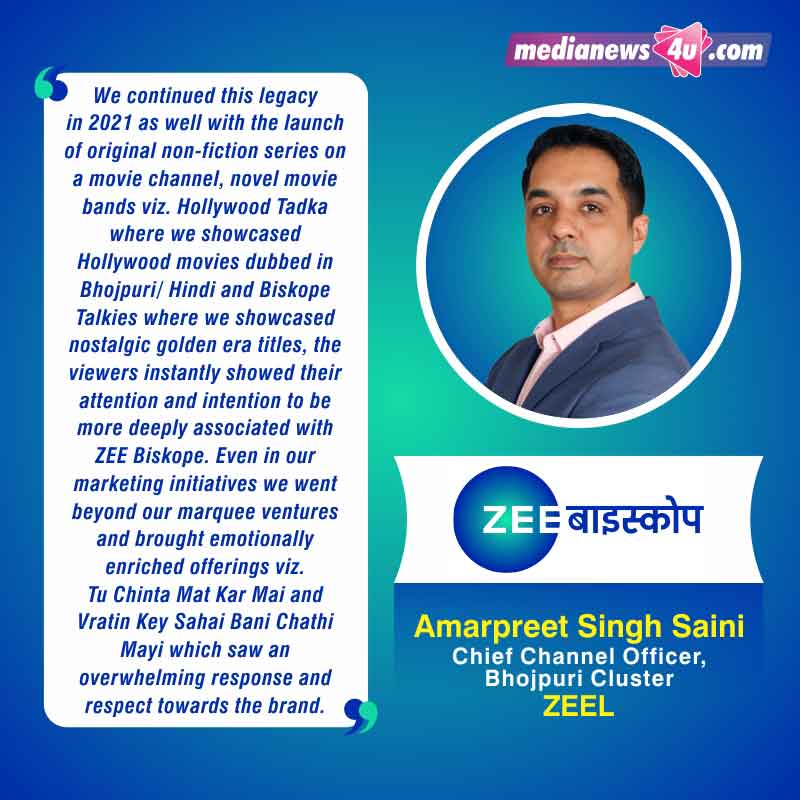 What have been your Marquee Events and notable campaigns to keep your audiences hooked?

Amarpreet Singh Saini: ZEE Biskope is a movie+ brand that serves Bhojpuri entertainment beyond the magic of movies in an authentic, consumer-led space with novelty at its core. In an endeavor to do so, the channel has made viewer engagement a conscious pillar of the brand. Starting from the very first year, ZEE Biskope has created category-first Marketing campaigns primarily on three pillars: talent platforms, technological innovation &rooted emotional quotient. Talent Camera Action has been a marquee initiative that received huge responses in its first season and a multi-fold response in its second. Similarly, KamariyaKare Hip Hop witnessed the introduction of rap in mainstream Bhojpuri entertainment in its first season and an Instagram innovation in its second. EmojiLahariya&Labhlitis Messiah has achieved humungous success with the tech novelty it offered through the Instagram filter and artificial intelligence. WhereasLittiChokhaDiwas, TuChinta Mat Kar Maai &  VratinKe Sahae Bani Chhati Maai left a rooted and emotional impact among viewers bringing them closer to the brand where they can feel the apnapan or affinity and thereby develop brand love. The closer we get to the viewers, the better we understand them and hence the better we cater to their content preferences.

In 2020 you had a lot of activities for your consumers, what have been the initiatives in 2021 in terms of keeping your consumers engaged with the channel?

Amarpreet Singh Saini: After an overwhelming response in the first season, we launched the second season of Talent Camera Action on Camera Day – 29 June. This time it was with far bigger gratification: winners got direct entry into Bhojiwood through ZEE Biskope originals. The campaign also witnessed association with popular Bhojpuri celebrity Yash Kumar & Nidhi Jha. The response was almost 2.5 times the first season. We received such quality entries that we had to telecast them across two weeks instead of one. 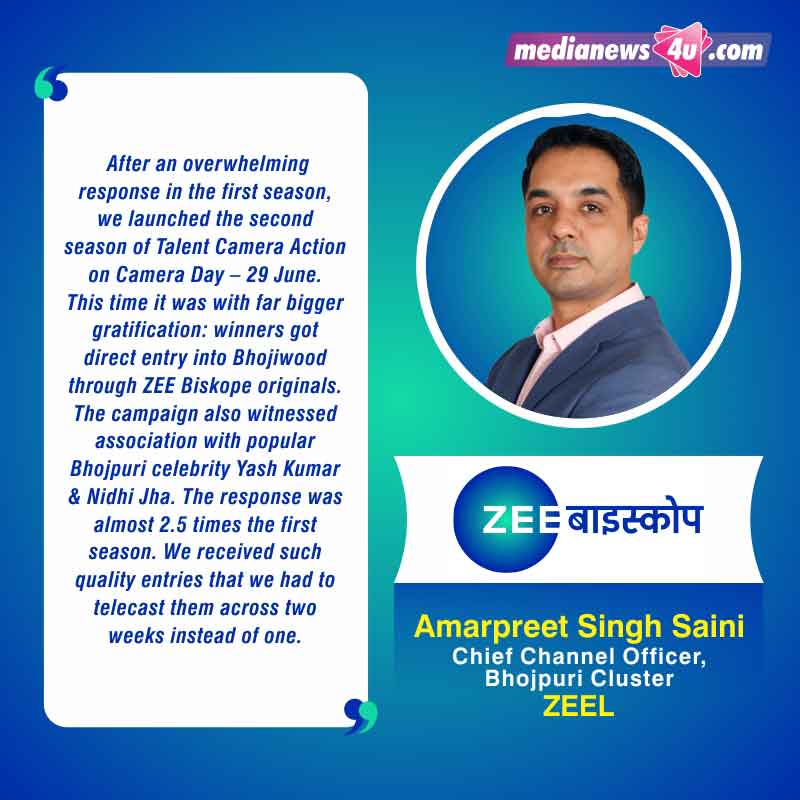 The other notable campaign has been Tu Chinta Mat Kar Maai which was ZEE Biskope’s first attempt to go the emotional impact way for a social cause. Marrying the topical occasion of Mother’s Day with the need of the hour – pandemic awareness, the campaign paced Emotional Quotient (EQ) over Intelligence Quotient (IQ). We urged viewers to promise their mothers that they will take care of themselves following every COVID 19 safety precautions like wearing masks, using sanitizers, washing your hand with soap, and so on. It imparted the feeling of affirmation in your mother that no matter wherever you are, you’re taking every possible measure to be safe during the tough times. The campaign received a huge response reaffirming the fact that emotional association works well in the category.

We also launched the second season Kamariya Kare Hip Hop, however, this time with a novel Instagram feature: Reel Remix. We developed an animated dance video of our digital mascots Bhaiyaji&Gamchaji dancing to the title track of KamariyaKare Hip Hop. Viewers had to do a reel remix with the mascots and the best won not just an opportunity to be featured on TV but lacs of cash prizes and gift hampers from ZEE Biskope. This novelty was again pretty well received by the audience.

Who is your nearest competitor and how has the Bhojpuri category/genre grown in the past 2 years?

Samrat Ghosh: ZEE Biskope has launched so many category first initiatives that today no other channel stands even remotely close to mimicking its success and connects with the viewers. Within a span of just two years not only the brand claimed viewership leadership since the day of launch but also became a stand-out beacon of everything extraordinary in the Bhojpuri category for the viewers. The sheer volume of participation and resultant incremental reach on our platform with each of our engagement initiatives is a testimony of our undisputed lead in the hearts of Bhojpuri viewers. 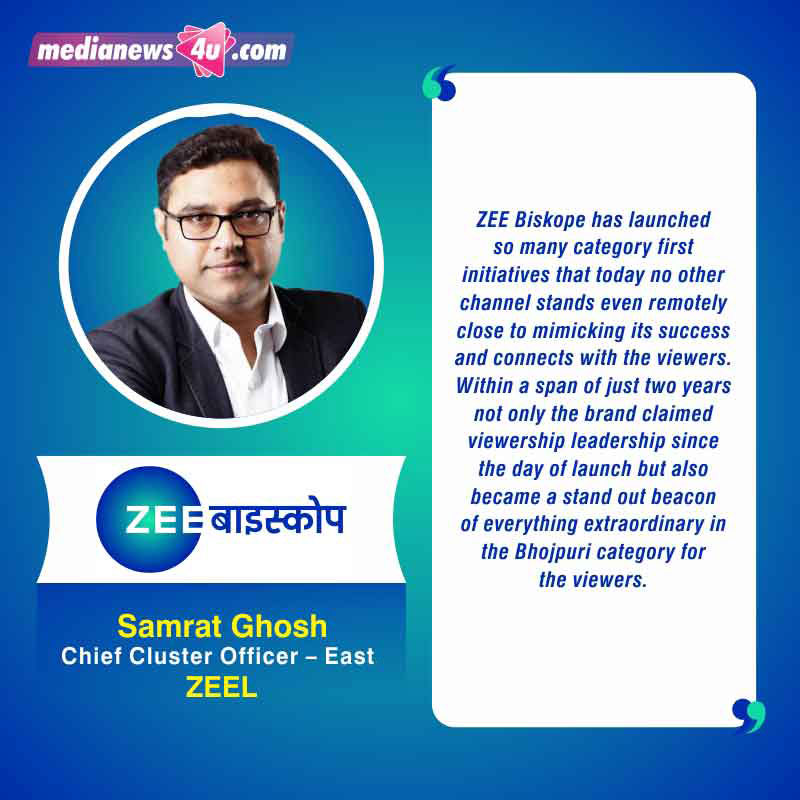 When it comes to marketing initiatives, how different is it for a regional channel?

Amarpreet Singh Saini: The marketing initiatives inculcate the local nuances making it relevant and appealing to the category. For eg., Bonding with Mother is a strong emotional pulse amongst Indians and more so in the Bhojpuri milieu where people are highly driven by the mother figure be it in real life or reel life, in movies, or in devotional space. Mothers are the epitome of love and care. She’s always concerned about our well-being and safety. Taking this nuance into consideration we developed Tu Chinta Mat Kar Maai on Mother’s Day that invited viewers to pledge and affirm their Mother that they will take care of themselves in the pandemic. Also, our first Chhat Puja on-ground initiative VratinKeSahaeBaniChhatiMaai gave a platform for viewers to pray for their ratings – the mothers or grandmothers in the family who keep a 36-hr long fast for the well being of the family.

Given national platforms are not always accessible to all, regional initiatives like Talent Camera Action &KamariyaKare Hip Hop empower audiences with a local platform to showcase their talent and get recognized. The responses to these initiatives show that there is hunger in the category and ZEE Biskope is definitely a thought leader in pioneering the same. 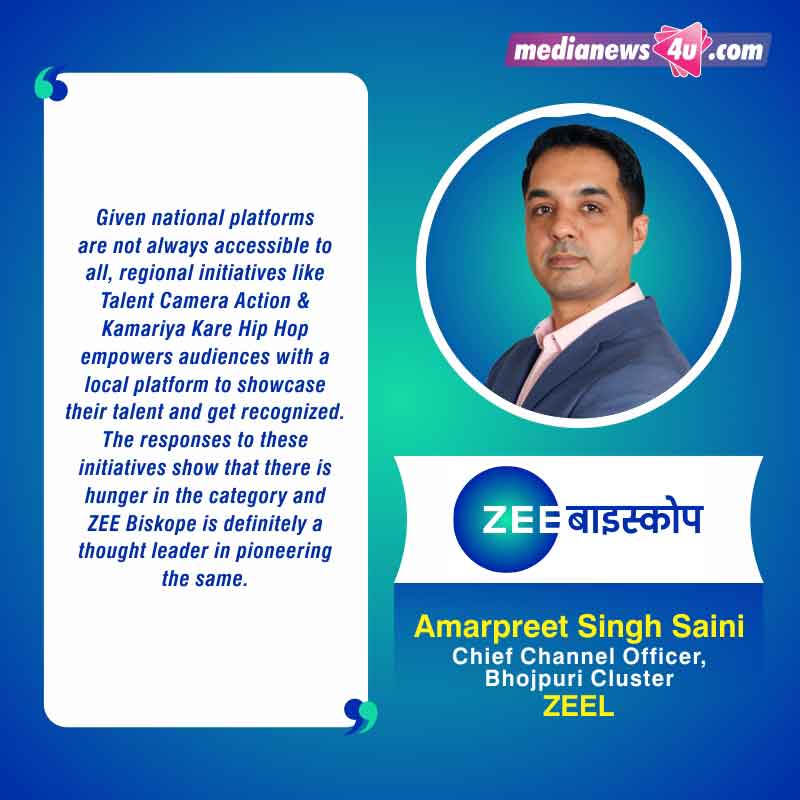 When it comes to advertising do national brands associate with regional channels or is the pie skewed towards hyper-local brands?

Samrat Ghosh: Zee Biskope is built on the premise of curation, which extends to its esteemed partners as well. Pandemic has compelled brands to establish strong value propositions for acceptance and ZEE Biskope has created customized solutions for brands to help them establish their value parameters sharply amongst its target audience. 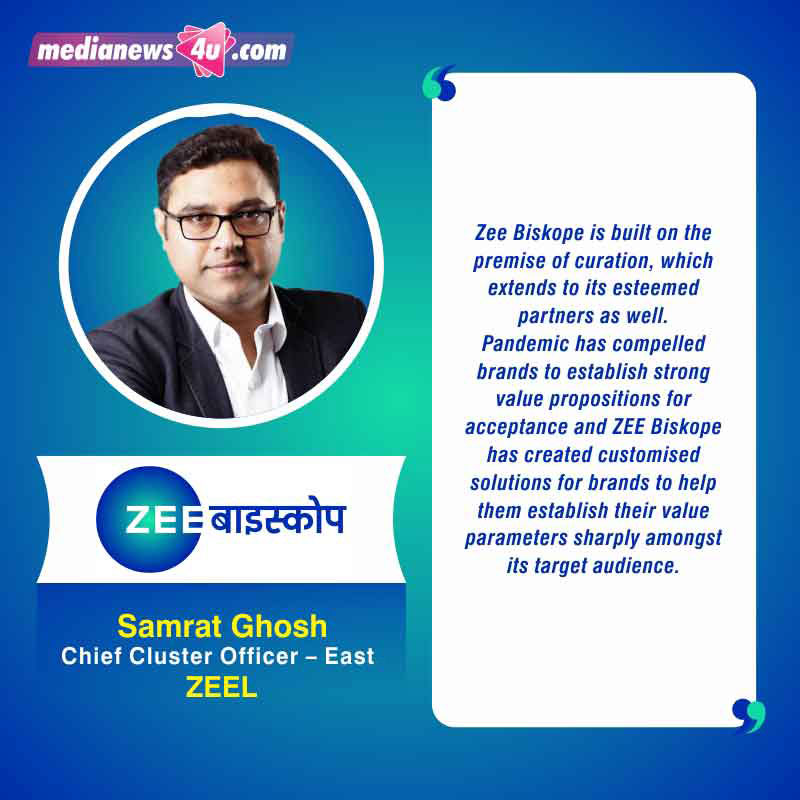 Many prominent national brands have associated with us through the last two years. Brands like Nestle, Adani Group, Parle have associated with us in the past and continue to do so. In the festive season this year, we had EmamiKesh King partnering with us for the Chhath Puja special premieres, Shree Cement sponsoring the romantic afternoon movie sl.

The channel recently won a lot of awards, can you elaborate on it?

Samrat Ghosh: ZEE Biskope has received 93 Marketing Awards across multiple national & international forums in about 13 months. The brand has been again the first in the category to achieve such a feat. It’s encouraging to see that our passion to bring alive the vibrant Bhojpuri culture through our hyperlocal offerings is being recognized in such esteemed forums.

Amarpreet Singh Saini: The brand has received a wide array of awards right from the channel to its campaigns, its content marketing and even individual awards. When these initiatives receive awards, it’s an endorsement of what we believe in ZEEL at being native to the region that we cater to and of our firm conviction about Bhojpuri deserving the stature that is due to it.

Amarpreet Singh Saini: ZEE Biskope will continue to create new landmarks in the Bhojpuri category through its innovative and novelty-driven approach. The firm belief in consumer centricity and the cause of elevating Bhojpuri viewership beyond mere passive entertainment will see 2022 as ZEE Biskope making a foray into original in-house movies, original content, awards IP, and some novel movie bands/ genres for our viewers. The engagement initiatives will witness a significant presence of on-ground initiatives as well along with online initiatives given the ground situation returning to normalcy – thus bringing some out-of-the-box accessibility initiatives along with marquee properties of ZEE Biskop will adorn the next year. 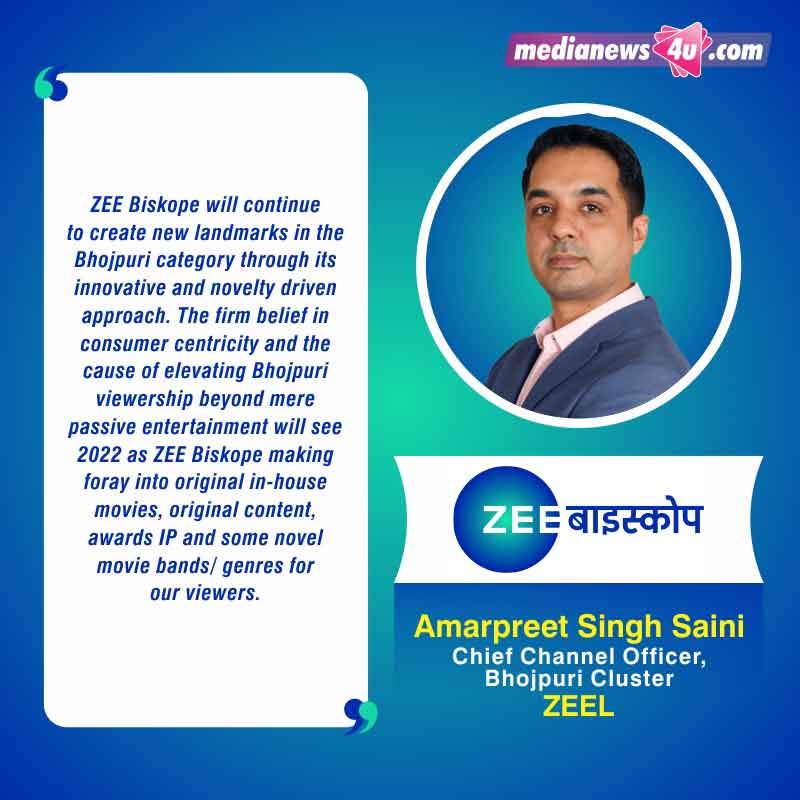