ZEE5 Global is very bullish about the US market and we are the only standalone platform for the diaspora: Archana Anand

ZEE5 Global, the largest streaming platform for South Asian Content in July 2021 launched in the US and opened up a world of multicultural entertainment for the South Asian diaspora and mainstream audiences across the United States.

They also unveiled ZEE5’s content slate and their new global brand campaign, “Welcome to South Asia: Stories from our world”. The campaign spotlights stories from South Asia, where even ordinary stories are extraordinary, therefore leading to the narrative “if this is our reality, imagine our stories.”

Archana Anand, Chief Business Officer, ZEE5 Global in an exclusive chat with Medianews4U speaks on the growth of the platform in the US in just 6 months, the OTT trends globally, the South Asian market and much more….

You launched in the US in July. How has the journey been so far?

We’ve had a very strong start in the US.  We had a mega launch in the end of June with Priyanka Chopra as Chief Guest and over 10,000 people attending the event virtually from all over the globe, and that helped build up tremendous buzz for the brand. We’ve grown at an exponential rate since then. In the shortest period of time i.e. in under 5 months, the U.S. has grown out to be our largest international revenue market. As the only standalone platform for South Asian content, viewers have seen great benefit not only in our rich and exclusive content offering across languages, but also in the convenience of finding what they want to watch easily in one single destination, at a much lesser price, making ZEE5 their go-to platform. While we see strong viewership across languages, it is Hindi, Bengali, Punjabi and Telugu content that are the key drivers for us in this market. 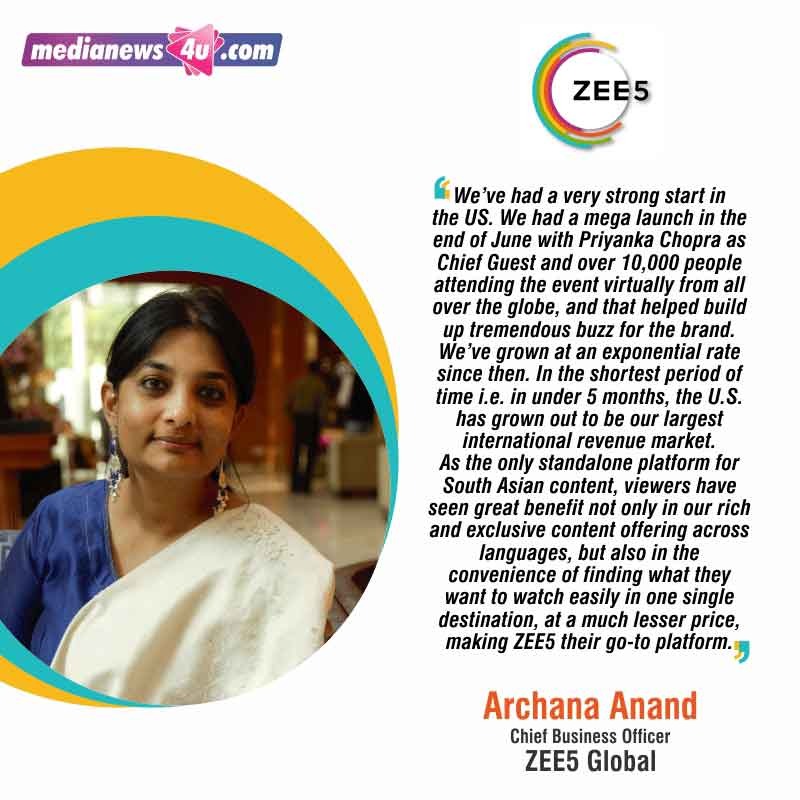 How is the scenario globally when it comes to OTT?

It’s been a year of continued growth for OTT especially with the initial part of the year seeing many countries still in partial lockdown. While consumption of online content peaked in 2020, it has only further accelerated in 2021 with a steady stream of original content leading to a growth in viewership and engagement across the board. On ZEE5, we’ve seen strong growth across all our markets especially UK, key countries in APAC and Middle East apart of course from the U.S. SVOD adoption has accelerated as consumers are increasingly open to paying for quality streaming content. Language remains a key theme with people looking for wider diversity of content in their preferred languages. Consumption of content in languages other than the primary language including international content has also seen a strong growth momentum globally, a phenomenon also driven by improvements in the quality of subtitling and dubbing, and we have been seeing this trend on ZEE5 too. 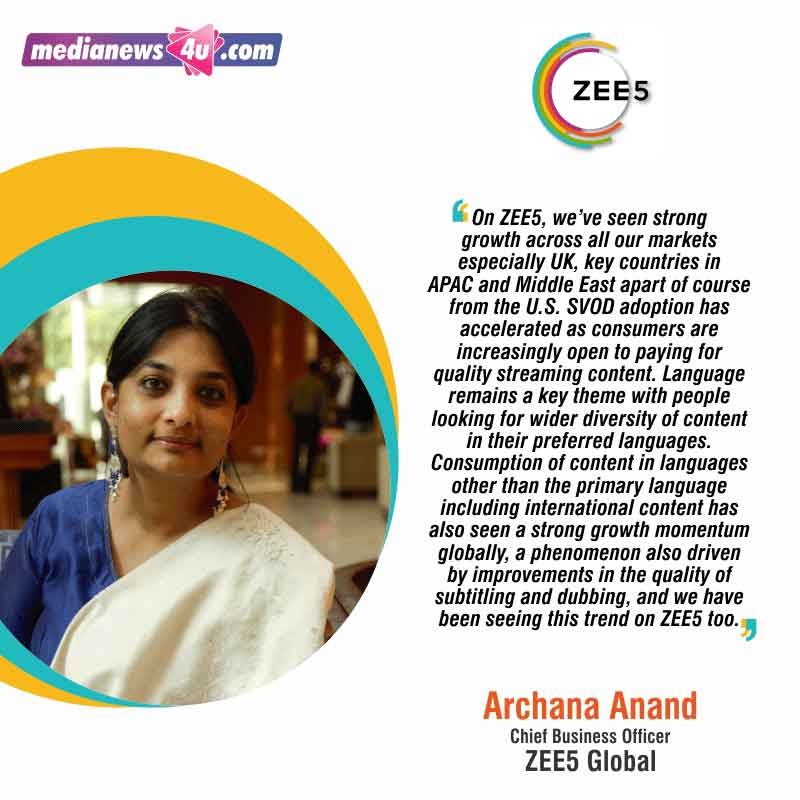 What have been the most innovative marketing campaigns in the global markets by ZEE5?

We launched a very key marketing initiative to reach out to younger audiences in the U.S. and strike deeper connects with them through campus events in association with NAAIS (North American Association of Indian Students) in July. These events were specifically designed to help Indian and Indian origin students to come together and bond as a community and strike deeper connects with their roots. We started it off with a pilot in July across 8 universities in Texas, Arizona and the Bay Area, including Stanford, and then, basis the huge response we received, built It out into something much larger than what we had originally envisaged. The ZEE5xNAAIS Fall Tour went across 50 campuses across 15 states conducting events for Indian and South Asian students, bringing them onto a common platform to bond and network, and driving a feeling of community through a shared love for Indian culture and Bollywood and regional language movies and shows, helping build out a strong connects for the brand with this younger generation.

What are your plans going forward?

2021 has been a hugely exciting year for us with strong growth across our key markets and more so with the SVOD launch in the US in June. Content is key to our growth strategy and look to make new strides this coming year in the global business with a high-quality-driven approach with tent pole launches and a strong focus on regional content. Doubling down on our promise to bring viewers real, rooted, and authentic stories from South Asia, we have a compelling content pipeline for the coming year comprising both blockbuster movies and original shows. Regional language content is an area of high focus going forward and we have earmarked 30-40% of our content investments to build out a deeper offering in languages like Telugu, Tamil, Bengali and others. The U.S. is a new market that we are extremely bullish about and we look forward to further building out our presence there as the only standalone platform for the diaspora. We have multiple plans in place for the market which will roll out in the next several weeks. These will further consolidate our position there as the foremost entertainment platform South Asian content. 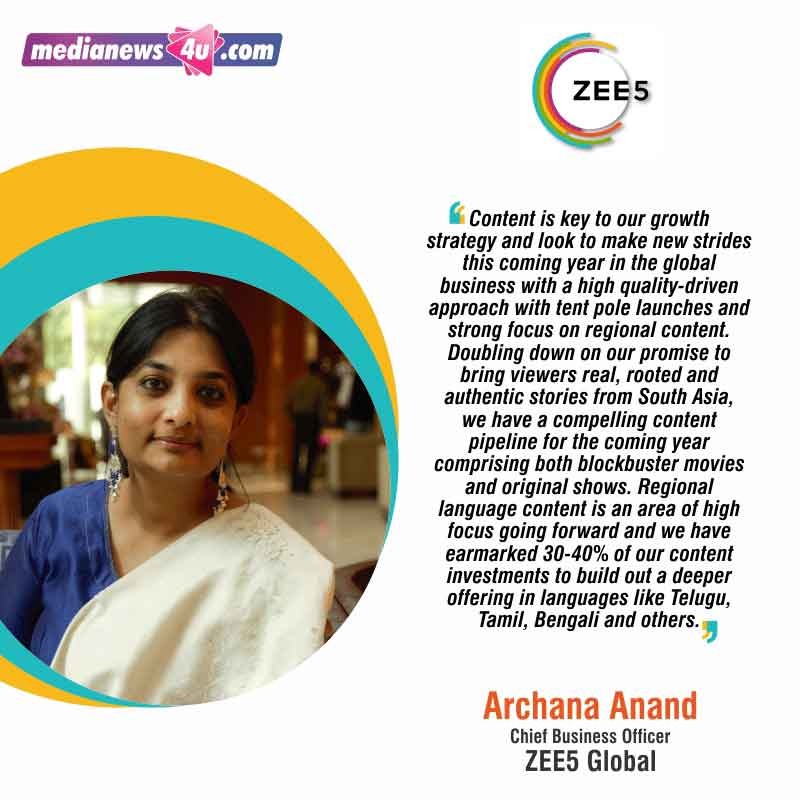 Yes – our partnership with NAAIS in the US at launch was a very key initiative that we took up to connect to Gen Z audiences. We have a slew of partnerships lined up for the U.S. which we will roll out over the next several weeks. We’ve also had multiple partnerships across retail and other categories in markets like U.K., U.A.E among others. On the content front, we have recently announced a content partnership with Applause entertainment and earlier with TVF. We will have more such partnerships also going forward.

The growth trajectory in South East Asia for ZEE5?

The APAC region, including South Asia and Southeast Asia, drives nearly 30% of our overall subscriptions and continues to be of high focus for us especially given the direct language affinity across markets like Bangladesh, and the large South Asian diaspora in markets like Singapore, Australia etc. These markets have seen strong growth over the year especially during the lockdown, on the back of our new content launches like Sunflower, State of Siege: Temple Attack and Rashmi Rocket among others as well as an expanding Punjabi and South content library. The scale-up in our Punjabi original content offering with new releases like Puaada, Qismat 2, Fuffadji and many more have had a good uptake in markets like Singapore and Australia in the region. We are also investing into South content as another priority area, and that’s helping us driving good engagement in markets like Singapore. 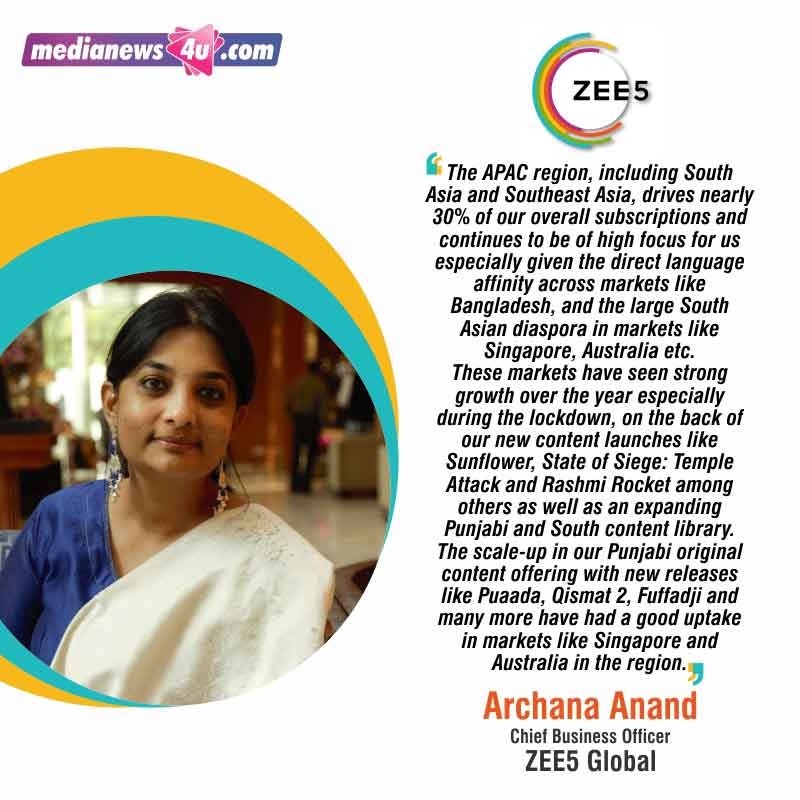 Steve Schapiro, the photojournalist and documentarian who covered the Civil Rights Movement and shot iconic portraits of Muhammad Ali, Barbra...

2022 will usher higher inclination by brands into the gaming industry: Experts

Sidharth Malhotra celebrated his 37th birthday on January 16th, from fans to Bollywood celebrities' wishes poured in for the star...