According to TAM Sports-Report, on comparison of Commercial Advertising on TV for IPL 15 and IPL 14 for the first 22 matches, the average ad volume per channel increased by 3% during IPL 15 over IPL 14. 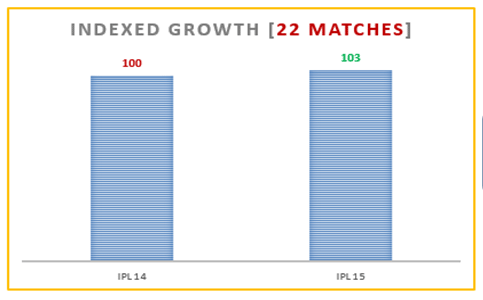 From the 22 matches of IPL 15, the number of Categories and Advertisers grew by 9% and 5% respectively in last 11 matches compared to first 11 matches.

Sporta Technologies was the only common advertiser among Top 5 advertisers during IPL 15 and IPL 14. Top 5 Advertisers contributed 22% share of Ad Volumes during 22 matches of IPL 15.