Mumbai: Axis My India, a leading consumer data intelligence company, released its findings of the India Consumer Sentiment Index, a monthly analysis of consumer perception on a wide range of issues, for the month of August.

The net CSI score, calculated by subtracting the percentage increase from the percentage decrease in sentiment, was recorded at +6, rising at the fastest pace over the last month, indicative of a positive shift in consumer consumption metrics.

The surveys were carried out via Computer-Aided Telephonic Interviews with a sample size of 10482 people. 72% of the people surveyed were male and 28% were female. The respondents were from 28 states and 7 Union Territories.

Commenting on the August report, Pradeep Gupta, CMD, Axis My India, said, “As the festive season approaches, consumers are slowly stepping out – as proven by increased numbers for non-essential spending and mobility. This should have a positive effect on the hospitality industry which has been severely affected due to the pandemic. Tourism, however, continues to be a concern as 83% of the respondents are still averse to traveling.  Economic sentiment is looking buoyant with ~64% of the respondents expecting the Sensex to cross 60,000 before the end of this year. Along with the nationwide vaccination drive, with over 96% of respondents pledging to adhere to all covid protocols, it is hoped that there will not be a surge in cases post the festive season. A net positive score of an additional 5.5 points over the last month indicates steady progress towards social and economic normalcy, with this trend expected to improve further in the next few months. Overall, we hold a cautious but optimistic outlook on consumer sentiments. By plugging into economically and culturally significant data points, the CSI will try to gauge, interpret, and predict the impact of macro factors on the lives of average India across demography & geographies. Our mission is to bring out the most authentic voices via the rigor of data and analytics” 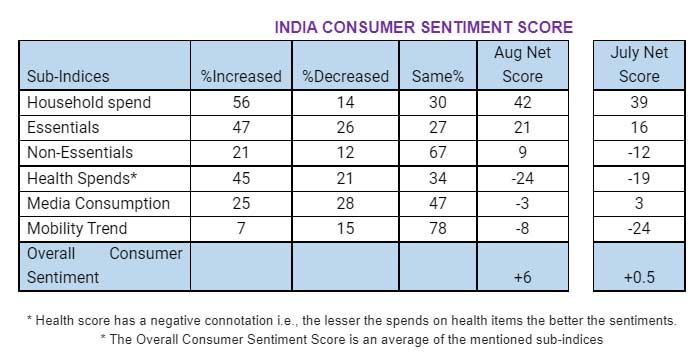