70 pc urban Indians claim their frequency of going to the cinema has decreased: Report

by Editorial
in Featured, Media, OTT
Reading Time: 3 mins read
A A

New data from YouGov reveals where people are watching new films, and shows how the shift to streaming platforms may affect cinema attendance in a post-COVID-19 world.

When asked about the change in their cinema viewing habits since the pandemic, nearly seven in ten urban Indians (69%) agreed with the statement, ‘My frequency of going to the cinema/theatre has decreased’.

The biggest reason for people’s reduced trips to the cinema hall is the option of streaming films online (44%), followed by people’s preference to watch films at home (42%). Nearly a third think going to a cinema is expensive or feel there aren’t any films worth going to the cinema for (32% each). North Indians were more likely to say they do not go to cinemas because of the flexibility of streaming films online. Similarly, the 40+ group prefers to watch films at home. 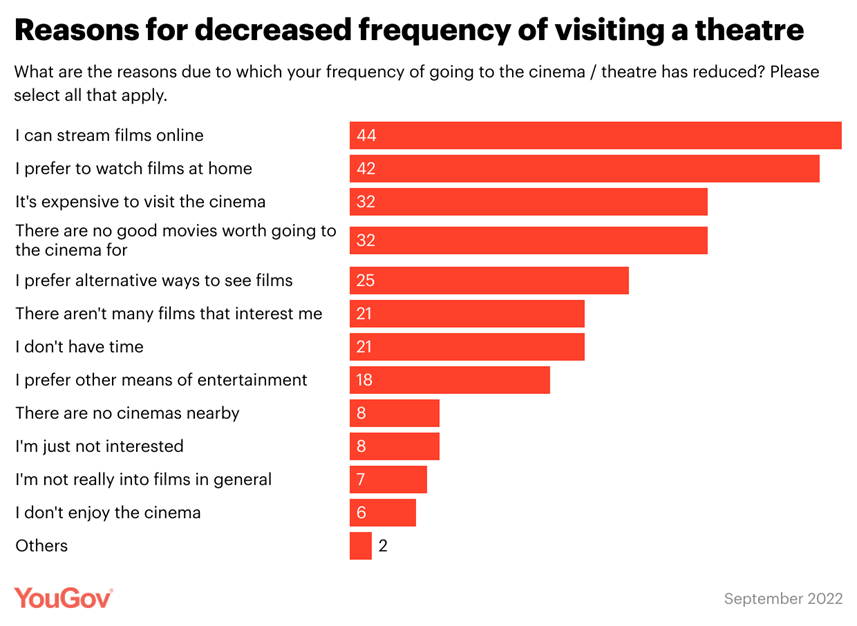 When asked about the mediums they have used most often to watch newly released films in the past six months, OTT platforms emerged as the most popular choice for nearly half of urban Indians. A fifth said they watched new movies on TV (22%) and only 16% went to the cinema or theatre to watch films during this period.

Looking at the data by age, 18-29 years olds were most likely to say they watched new films on OTT/ streaming platforms (at 57%) in the past six months, while the 40+ adults were more likely than others to watch them on TV (26%) or in theatres (19%). Notably, residents in South India were more likely to say they watched newly released films in theatres as compared to residents of other regions (at 22%).

Even though OTT has gained precedence, not all hope is lost for theatres. YouGov data shows a quarter of urban Indians (26%) said their frequency of visiting a theatre has increased since the pandemic, with young adults between 18-29 years echoing this sentiment most strongly.

An overview of people’s cinema viewing habits shows one in six urban Indians (15%) said they go to a theatre to watch a film at least once a week, 8% do so once a fortnight. Just under a quarter visit a theatre at least once a month (23%), and nearly half visit it once every 2-3 months or longer than that. This behaviour is similar across all age groups. 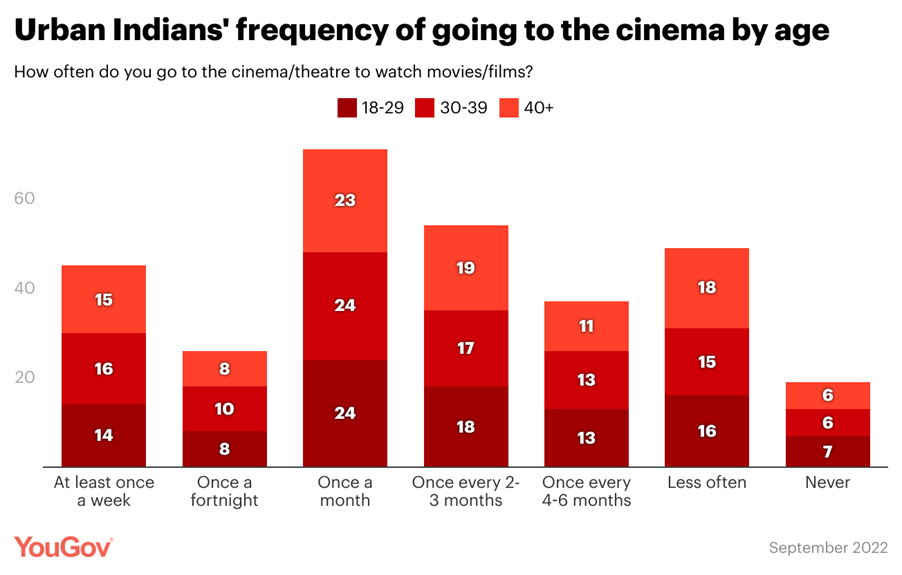 Past behaviour shows cinema outings in the last 12 months have mostly been with friends or family. Bollywood films emerged as the most popular kind of cinema among people (at 61%), followed by Hollywood or regional South Indian films (45% each).

When it comes to film types, comedy is the most preferred film genre by urban Indians (67%), followed by action (54%) and thriller (51%). Specifically thinking about how they like to watch these genres, a majority (55%) said they enjoy watching comedy films on OTT or streaming platforms. 19% prefer watching them in a theatre and 26% prefer both the options. The higher preference for OTT platforms is uniform across genres, except for action films, where people were more likely to say they like watching these films in theatres than on OTT platforms. 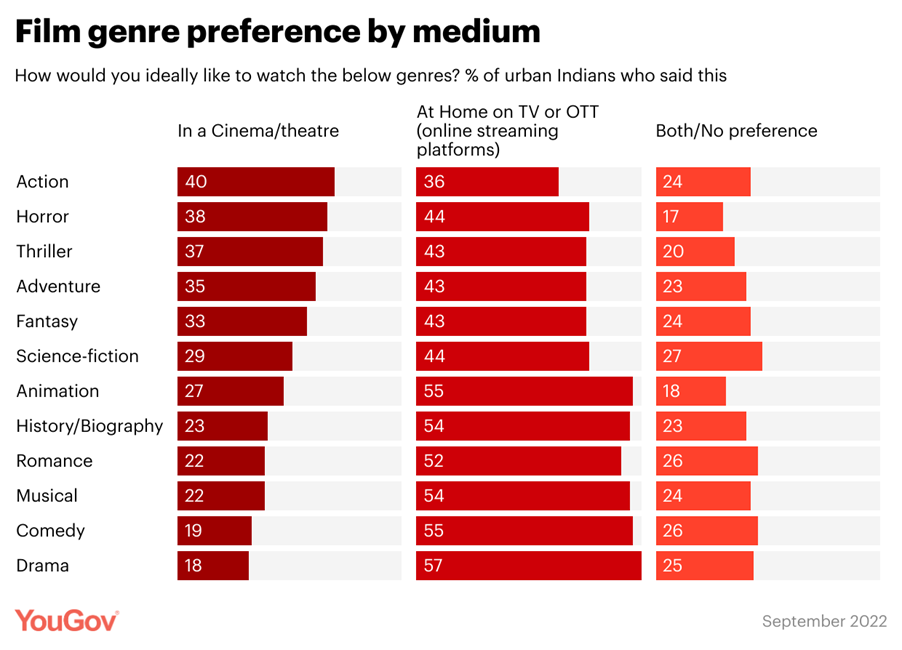 Commenting on the research, Deepa Bhatia, general Manager, YouGov India, said, “After two years of the pandemic, theatres in India finally opened to full capacity this year. However, the rising popularity of streaming platforms remains a challenge discouraging people to step out of their homes.

While cost and home viewing habits keep many people away from the pictures, it should be remembered that people go to the cinema to enjoy the experience. It is important for brands to understand the changing cinema habits and behaviours of urban Indians to re-imagine their marketing strategies and prepare themselves against this ever evolving relationship between films and consumers.”