aha has broken several conventional rules in the OTT sector in the country: Ajit Thakur

aha-the Indian subscription video-on-demand and over-the-top streaming service which offers Telugu language content have recently forayed into Tamil-language content as well. The platform was launched in 2020. The platform has acquired one million subscribers within a year of its launch and by July 2021, it has over 1.5-million paid subscribers and 40-million-plus users, catering predominantly to the markets of Andhra Pradesh and Telangana states. They have emerged as a prominent OTT player in the regional language market with an investment establishment of around Rs 175 Cr.

In Conversation with Medianews4u, Ajit Thakur, CEO, aha spoke about the platform’s success journey, plans for the Tamil content market, and more.

Can you take us through aha’s journey, and the challenges faced?

When aha was launched in February 2020, nobody noticed us, since then it’s a David & Goliath story for aha! We didn’t have the biggest films, what we had was a unique understanding of the Telugu market and different business models and our desire to be among the top OTT platforms in the country. aha has broken several conventional rules in the OTT sector in the country. If we go by the current numbers, aha is among the Top 2 OTT platforms compared to the global and broad giants backed platforms. Regional markets were ignored by the major OTT players and now they are setting up offices in Chennai & Hyderabad.

My journey with Aha began 3 years back when I was invited by Allu Arvind and Ram Rao for a discussion on venturing into an innovative business, the idea of the OTT platform came up and we set up the company, Arha Media & Broadcasting Pvt Ltd in 2019. I travelled the length and breadth of Andhra Pradesh & Telangana and during that journey, I deeply understood people’s fascination and love for content is enormous and higher than any other part of the country.

They were consuming content in other regional languages along with Hollywood and Bollywood content and then I realized that there was a gap, local language content was absent. This thought led to the birth of a platform with 100 percent regional language content. I spoke to the promoters, and we decided to take the entire investment and focus on one language at a time. We decided to launch the platform in Telugu with 100 percent Telugu positioning.

We tested different brand names like Sooper, Keka, and Aha. We finalized the name aha based on the market research we did. aha was launched in February 2020 and a year later in 2021, we were at 1 million subscribers, 40 million unique visitors, and 10 million play downloads. Today, we are at 2 million subscribers, 55 million Unique users and 14-15 million downloads. 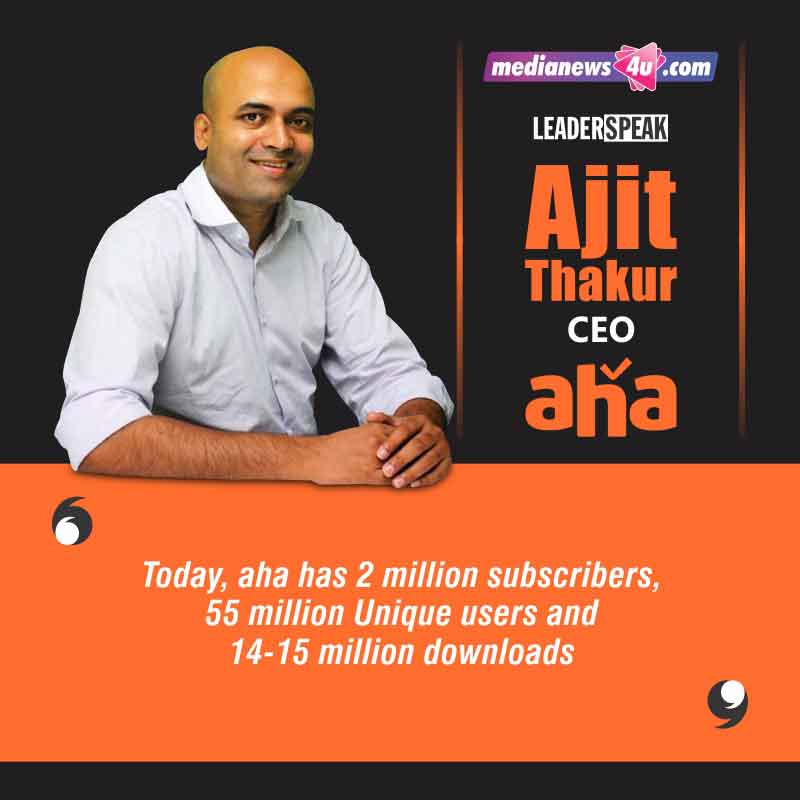 Can you elaborate on how aha broke the existing rules of the OTT sector in the country?

We understood that we had a unique proposition and it was driven by breaking existing rules of the market. The first one was that we chose to concentrate on one language market. We didn’t have a variety of language content. We only had movies and web series with 100% Telugu prominence, which was a great proposition for the audience.

We didn’t look at Hyderabad as the core of our target group, we marketed our shows and films in 40-50 markets in Tier 2 and 3 cities. The team didn’t stop by Digital marketing, we did extensive OOH and Print campaigns along with local activation strategies. aha, subscriptions are being sold at local Khirana and mobile stores. Today, we have the confidence to say that Rajahmundry is in love with aha as Hyderabad is and that’s because we reached out to our audience with innovative marketing strategies.

Another major reason behind the success of aha is the curation of content.

The content creation is done locally, the entire team is based in Hyderabad, their experience and the deep experience possessed by our promoters have helped us in curating content sharper without losing the local essence. Another strategy that helped us in dominating the market is, we launched fresh content every week and this helped in building 100 percent Telugu content habits regularly. These are the primary reasons which laid the foundation for aha’s success and helped us in catapulting to the next level of growth. 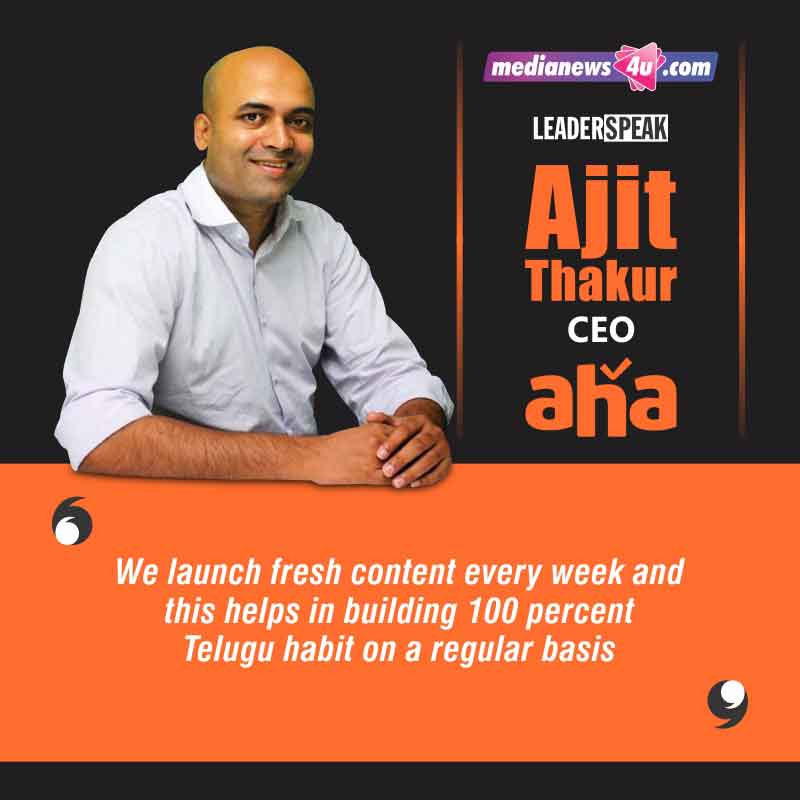 What are the current challenges faced by aha Telugu?

The SVOD market itself is limited by the total number of people who are willing to pay for standalone subscriptions. As per various studies around 400-500, millions subscribe to content online but the number of subscribers to SVOD services stands at 40-45 million that’s applicable in the AP and Telangana market as well. aha is among the Top 2 standalone SVOD services in Telugu, we have the task of growing the SVOD market. 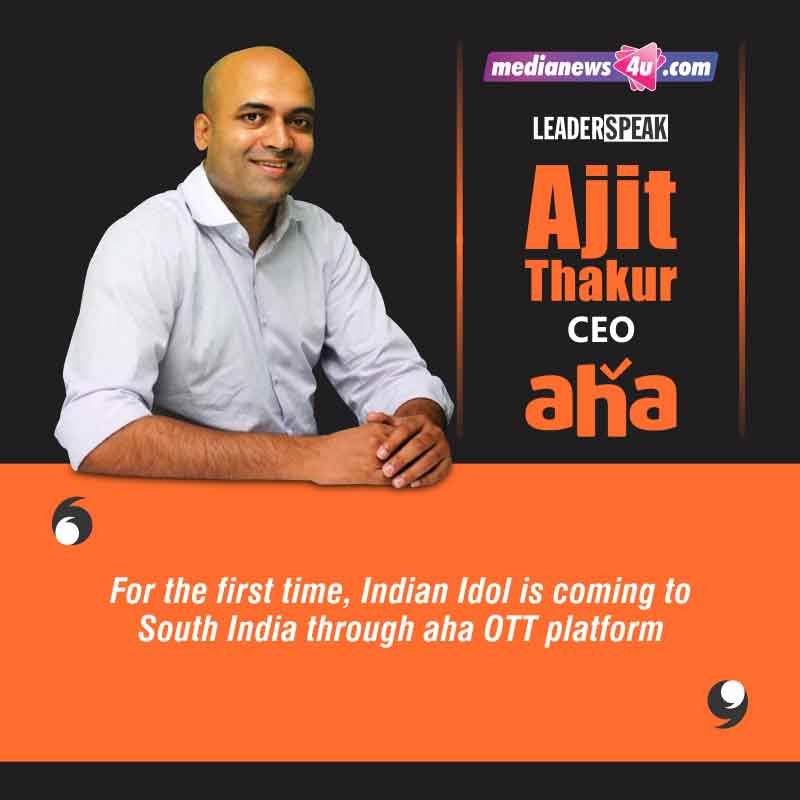 We are a price-sensitive market, and our next challenge is monetization. We are coming up with unique ideas to monetize the platform. For the first time, Indian Idol is coming to South India and on the OTT platform, we have onboarded 6 brands. We are planning to grow our revenue and unique user base by integrating brands into our content. We have also set up aha international as a separate business and that’s also reaping good numbers. 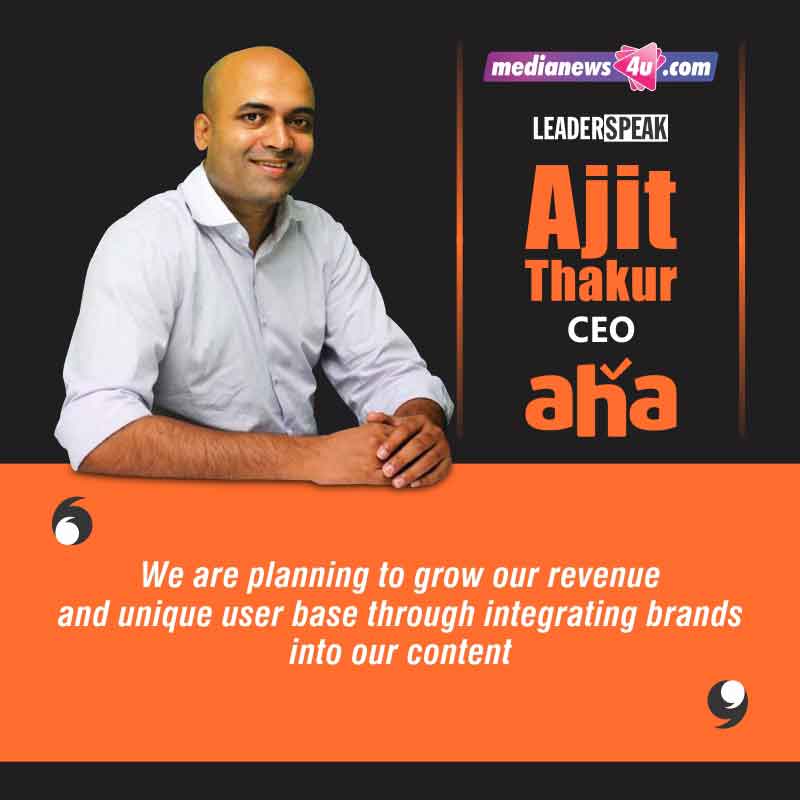 We are all in the learning phase of writing content for OTT platforms in the country. Finding the right kind of writers and creating a talent pool of writers for aha Telugu and Tamil are a major challenge.

Throw some light on the revenue model of the platform?

A major chunk of revenue for aha is from subscriptions. aha, International is growing rapidly and we are planning to introduce more branded content. At some stage, we might also introduce a premium model. The promoters have been supportive where they have assured us not to be worried about the revenue and given us wings to fly. Their confidence in the platform and their ability and appetite to invest for the next level of growth boosts our confidence as well.

aha has forayed into Tamil recently, can you talk to us about the reasons behind the launch of aha Tamil?

We always had plans to expand into more languages, but only after being well-versed in one language was a decision made by us from the very start. For any other OTT platforms, the prime option would have been to choose a language, put it as a bouquet of multi-language content. We have a unique proposition of 100 percent local. For aha Tamil also followed the same procedure we implemented for Telugu, aha Tamil has a separate team based in Chennai. We will soon bring in brand ambassadors for aha Tamil.

What are your imminent plans?

We are looking to expand to other languages and in the next 12 months we will soon launch our platform in another language, the announcement will be made in a later stage.

We are witnessing mushrooming of several OTT platforms of late, where is the OTT sector in the country headed towards?

The next 3 years will witness mushrooming of new OTT platforms.

OTT is still a nascent industry and people have realized the power of regional languages. The existing platforms will keep investing in regional languages and eventually consolidation is inevitable. People who are venturing into the OTT sector must realize that it’s a deep pocket game and monetization is not easy.

Mumbai: Zee Bollywood is all set to evoke nostalgia with the celebration of 35 years of Mr. India on 25th...