DD National leads the Hindi GEC Pay-TV category with 1620mn impressions this week according to the television viewership data released by BARC India for week 16.  Dangal moved up to the 2nd spot from the 9th spot with 101mn impressions followed by Sony SAB on the 3rd spot with 809mn impressions.

With DD Bharati being on the 4th spot this week too with 677mn impressions, new entrant in this list Big Magic secures the 5th spot with 659mn impressions followed by Sony Entertainment Television that drops down from the 3rd spot to the 6th spot with 491mn impressions.

Star Plus moves down to the 7th with 477mn and for the last 3 spots in this category we have Star Utsav with 310mn impressions, Colors with 291mn impressions and Sony Pal with 280mn impressions.

This week in the HINDI GEC Rural category, Dangal emerges as the leader, followed by DD National that was leading the chart for few weeks. Big Magic is standing strong on the 3rd spot while DD Bharati that moves up to the 4th position this week. Sony SAB gets down to the 5th position in this category. Star Plus and Sony Entertainment Television have secured the 6th and 7th spot respectively and with the last three spots are secured by new entrant Sony Pal and previous week’s players Star Utsav and Zee TV. 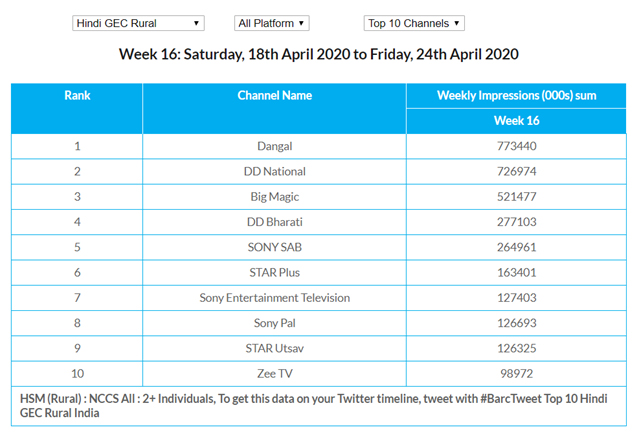 DD National being the leader this week too followed by Sony SAB on the 2nd spot, DD Bharati moves up to the 3rd spot and Sony Entertainment Television on the 4th spot. We see a swap in the positions, with Star Plus securing the 5th spot and Dangal getting down to the 6th spot. For the last four spots on this category we have Colors, Star Utsav and new entrants Sony Pal and &TV. 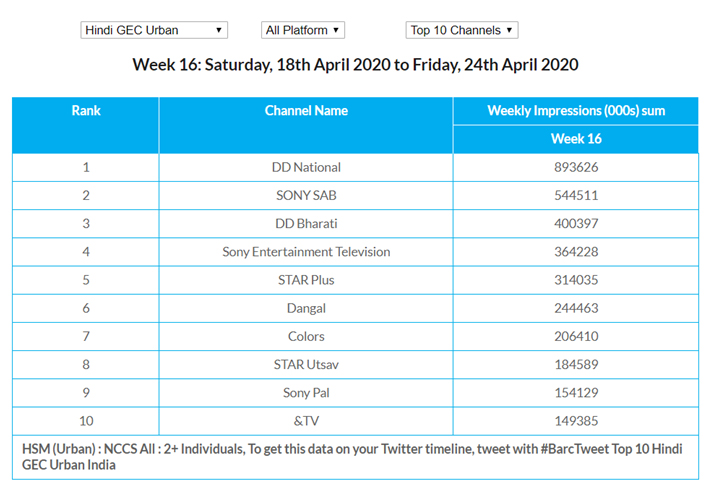 Mumbai: As India gears up for the celebration of its 72nd Republic Day, Republic Media Network brings an exclusive broadcast...