Mumbai: DD National leads the Hindi GEC Pay-TV category with 1176mn impressions this week according to the television viewership data released by BARC India for week 17. Sony SAB on the 2nd spot with 745mn impressions followed by DD Bharati on the 3rd spot with 615mn impressions.

This week in the HINDI GEC Rural category, Dangal emerges as the leader, followed by DD National on the 2nd spot. Big Magic standing strong on the 3rd spot this week too followed by DD Bharati on the 4th position. For the 5th and 6th position, we have Sony SAB and Star Plus, Sony Pal moves up from the 8th spot to the 7th spot. For the last three spots we have Star Utsav, Sony Entertainment Television and Colors. 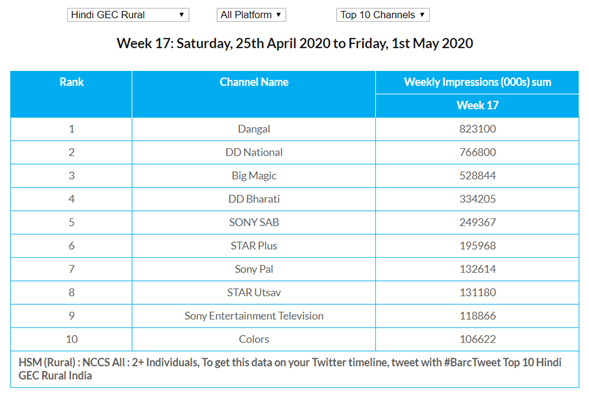 DD National being the leader this week too followed by Sony SAB on the 2nd spot, DD Bharati on the 3rd spot and Star Plus on the 4th spot. For the 5th and 6th spot we have Sony Entertainment Television and Dangal. Colors show slight growth and moves up from the 8th spot to the 7th spot, while Star Utsav, Sony Pal and Big Magic are the last 3 contenders in this category. 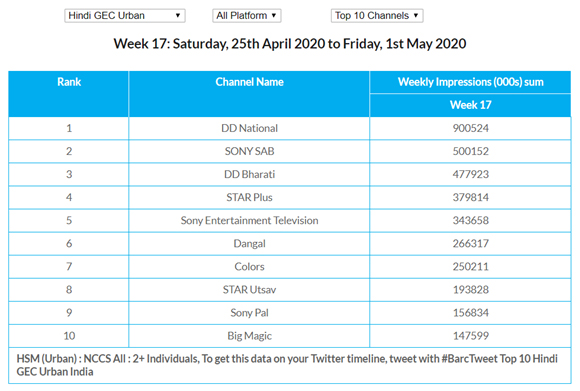