Consumption of Regional Content grew across all media in 2019: report

Mumbai: The Regional Content Consumption (i.e., content in languages other than Hindi) in 2019, has witnessed growth across all media platforms such as Television, Print, and Digital.

The report also estimated the trend to consume content in regional languages to keep growing over the next few years, particularly on digital media as growth in internet users continues to be led by non-metro audiences.

Regional share of viewership to grow to 55% of Total TV viewership:

Viewership of regional language channels will continue to grow and reach 55% of total TV viewership in India as their content quality improves further. 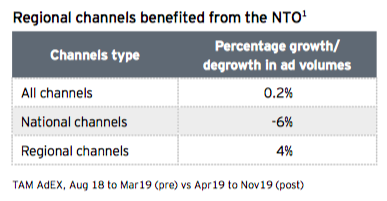 Regional languages commanded the highest share in circulation and Readership:

Regional readership continues to be the largest in India with 18.9% (IRS Q3) of total readership (TR) in all India and Average issue readership (AIR) of 7.8% in IRS Q3. Moreover, unlike English which has an urban skew, vernacular products are read both in Urban and Rural markets. 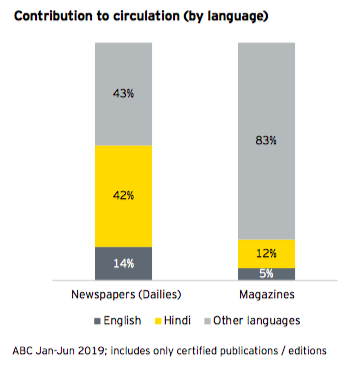 Traditional regional media has the power of feet on the street today and will capitalize that to reach SME and long-tail advertisers across the country, offering traditional plus digital bundles and integrated sales. Ad platforms will enable them to reach a larger set of advertisers, and earn revenues through simple, selfserve models.

With average data consumption per month jumping up 33% in 2019 and Rural internet subscriptions growing faster at 22%, the demand for regional digital content will rise much higher as growth will be driven by consumption in non-metro markets.

EY estimates that time spent on online video consumption is increasingly moving towards regional languages, whose share should increase from 37% of consumption today to 50% by 2025. Moreover, 60% of YouTube watch time comes from outside the top six cities and 95% of vernacular content access comes from tier 2 and 3 cities. 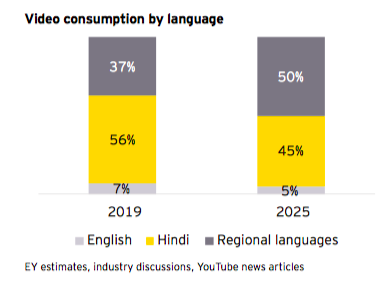 One of the leading boutique Public Relations & Social Media Agency, Crosshairs Communication has bagged the PR mandate for France-based...

Mumbai: Taking the OOH engagement, a notch higher, COLORS built curiosity amongst the viewers by putting up billboards and posters...