New Delhi: Snap Inc. today held a virtual event to celebrate the strong partnerships it has built in India and its growing community of Snapchatters. The company announced that Daily Active Users in India have increased by nearly 150% in the past year* and highlighted new content, partnerships and experiences that further demonstrate the company’s commitment to ensure the Snapchat experience is tailor-made for its Indian community.

Since launching its content platform Discover in India in 2018, Snapchat has aired content from over 30 partners including Miss Malini, NewJ, Pocket Aces and Vice India. In the past year alone, over 40 million unique viewers in India have watched a show on Snapchat**. The company today announced further investment with a Hindi adaptation of one of its longest running Snap Originals series Phone Swap and new shows featuring celebrities Anushka Sen, Raftaar, Ruhi Singh and Vir Das. These will premiere in 2021. 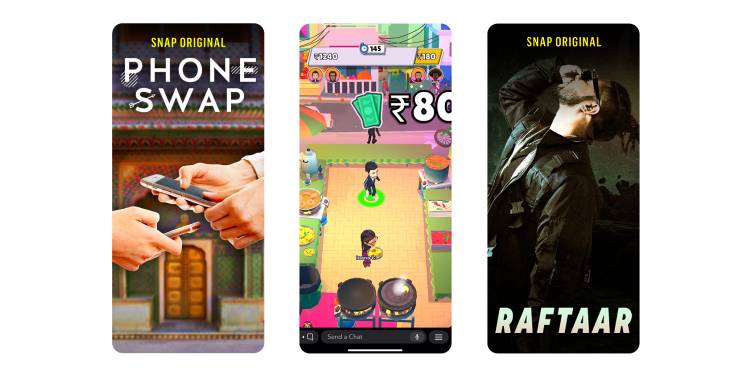 Snap also announced its first Indian Snap Games partner – Moonfrog Labs – who is creating an exclusive, custom-made version of popular board game Ludo Club. Furthermore, Ready Chef Go! – a Snap Game that launched last year and saw 25 million unique players in the first 6 months*** – will add an Indian kitchen challenge called ‘Dosa Dash’ where Snapchatters will be able to cook up Dosa with their friends.

The company also debuted the most recent developments in its partnership with Samsung, including new Hinglish personalised Bitmoji stickers that can be used on the Samsung Keyboard. Finally, new SnapKit integrations with Alt Balaji and NDTV, mean that Snapchatters can share everything from breaking news, to shows they’re watching, price comparison information and even real time ETA when travelling across the country by train.

“It’s exciting to share what we’ve been working on over the past few months,” said Durgesh Kaushik, Head of India Market Development at Snap, “It’s always been a priority to us that Snapchat feels like it was made just for you – no matter where you are in the world or the language that you speak. We’ve come a long way since last year – seeing nearly 150% growth of our community here in India. We hope Snapchatters really enjoy these new features and experiences, and we are grateful to have such creative partners to collaborate with.”

Following the event, India’s first Official Lens Creator – Hardik Shah – hosted a Lens Studio workshop. Lens Studio is Snap’s free tool to create augmented reality experiences – making it accessible to a wider range of creators. Snap has held workshops at high schools and colleges across the country and have now taught over a thousand students. There are seven OLCs in India who have created a range of experiences from celebrating Independence Day, to bringing local landmarks like the Gateway of India to life or Bollywood Arts Project to life and even teaching Hindi.

Earlier this year, in response to the global pandemic, Snap launched its new mental health and well-being feature ‘Here for You’. In partnership with the Mariwala Health Initiative and Manas Foundation, the feature provides expert resources when Snapchatters search topics such as stress, anxiety or depression.