Detergent and Sanitary brands are the Most aired Ad Campaigns in Week 32: Chrome Optimal+

Mumbai: Chrome Data Analytics and Media’s Optimal+ data has released the comparative study of the performance of various brands in week 32 against week 31. The report categorise the performance of brands under three broad categories namely Most Watched ads, Most Aired ads and the Most Liked ads based on analysis of data involving 34000 panel homes across the country.

Chrome Optimal+ study reveals that Campaign by Detergent Brand Vanish for its Oxi Action variant has retained its leadership position among Most Aired Ad Campaigns, followed by Sanitary brand Lizol’s recent campaign in runner up position. Campaign from yet another Sanitary Brand Harpic Steps up and captures 3rd place followed by Harpic’s 10/10 Campaign in 4th position. Trivago manages to secure 5th place While the Santoor’s Ad campaign For Santoor Sandal & Turmeric Drops out the list in this Week.

Looking in to the Most Watched ads category,  Indigo Paints’ Campaign for Its Acrylic Laminate Product continues to dominate the list followed by Pampers ad campaign for its Baby Dry pants in 2nd position. Ad Campaign by Tide Plus has managed to secure 3rd place followed bycampaigns of  Everest Tikhalal and Colgate Swarna Vedshakti in 4th and 5th places respectively. Few Campaigns by Previous week players like Tide, Colgate and vicks fails to feature in the list in Week 32. 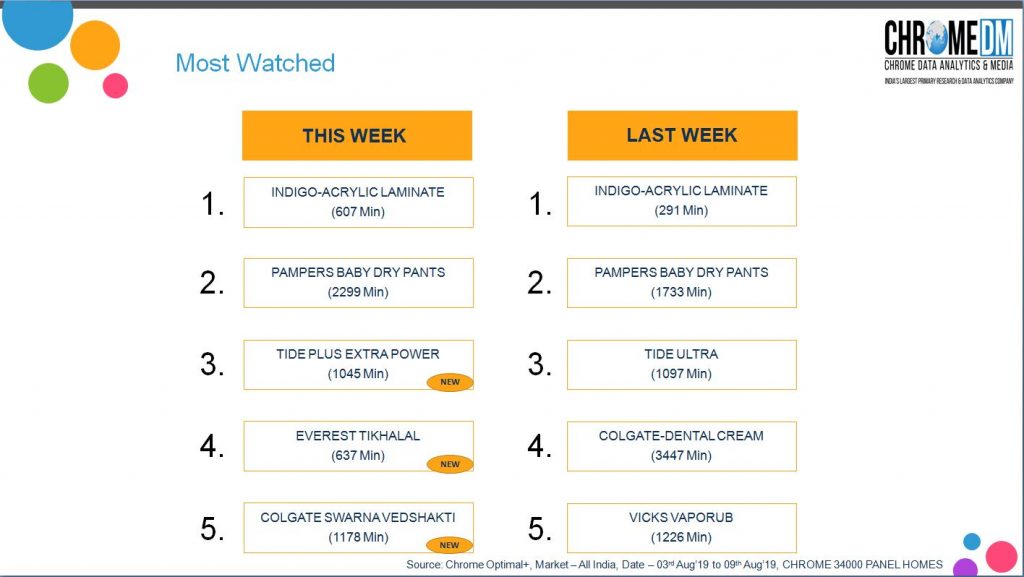 The Most liked category is led by Tide Ultra ad campaign followed by Detergent Brand Ariel’s campaign in second position. Rest of the position in this category is seen occupied by fresh players in this week. Campaign by Clinic Plus has secured 3rd place followed by Axe Signature ticket campaign and Kalyan jewellers ad campaign in 4th and 5th places respectively. However ad campaigns of few brands like Colgate, Whisper, Sun Feast and Google exits the list in this week.