A popular E-commerce shopping website Myntra changed its logo after a Mumbai-based activist Naaz Patel complaint with the state cyber police, alleging that the company’s signage was “insulting and offensive” towards women.

Naaz Patel is a founder of an NGO called Avesta Foundation. She filed the complaint in December last year, demanding the removal of the logo and calling for action to be taken against the company. Patel alleged that the old logo is offensive towards the women in our society.

“We called a meeting with Myntra following the complaint, they (Myntra) came and agreed to change the logo. They have sent an e-mail as well on the same,” she said.

Later a tweet was tweeted by Avesta Foundation saying 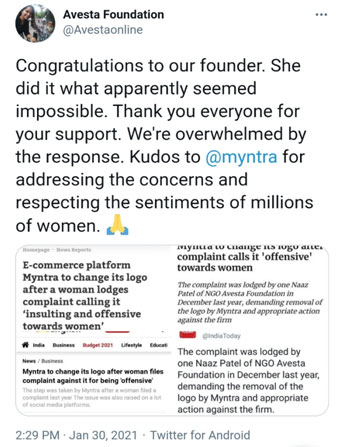 Pride Month. Why all brand voices, big and small matter?