by Neethu Mohan
in Exclusive, Featured
Reading Time: 5 mins read
A A

“The advertising industry is expanding much faster than we anticipated earlier in the year. Our industry-wide expectation for global advertising in 2021 now calls for a growth rate of 22.5% versus 19.2% previously (both figures excludeU.S. political advertising). Likewise, 2022 is poised to grow faster than we predicted in June, we now forecast global growth of 9.7% versus 8.8% previously,” states the report.

While many of the underlying trends the report observe are global, the growth rates do appear to be disproportionately concentrated in the US, the UK, and China, which together account for approximately 70% of all the industry’s growth, despite making up about 60% of the total market. The expectations for expansion are relatively widespread, among the 64 territories we track, we expect the median one to expand by 19.4% in 2021 and 9.1% in 2022.

Looking at the top 10 advertising markets over longer time horizons, growth should moderate, with France, Germany, Australia and the US all poised to grow in a range of 4-5% annually, on average, over the next five years, while markets including India, the U.K., Brazil, Canada, Japan and China are forecast to grow between 6-8% annually, on average. 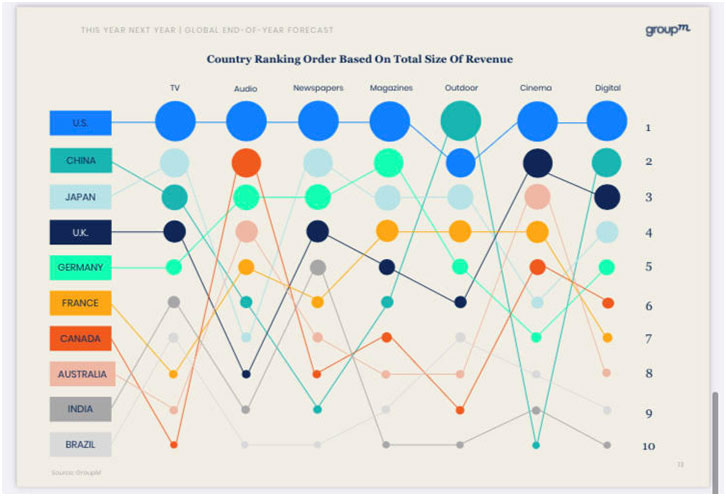 US, China, and UK remain world’s most important growth markets

For several years now, three markets have stood out for their contributions to global growth, significantly outperforming the rest of the world despite their already massive size. We believe the US, the UK, and China have all spurred substantial numbers of small businesses to increase their use of massive digital platforms.They have also been home to large numbers of suddenly big and rapidly growing venture-funded or early-stage publicly listed businesses. Many have driven their results through “growth hacking” techniques that relied heavily on Google, Meta and Amazon. The rapid growth of the Chinese economy helped the other two markets in other ways, too- Low-cost international postal rates paired with narrow targeting of consumers on digital platforms and the ease with which physical and virtual goods could be developed quickly helped build the Chinese presence in the US and the UK, among other places.

“We can see this trend in data from Marketplace Pulse that shows Chinese manufacturers now represent 41% of Amazon Marketplace vendors in the U.S. and 36% in the U.K. Presumably, this activity is contributing to at least some of Amazon’s growth in ad revenue, too. Meta’s financial disclosures list China first among the individual countries from which it generates revenues, despite having no consumer-facing presence in the market,” states the report.

As a result of rapid expansion, digital advertising account for 60% of total advertising tracked in our data, up from54% in 2020 and 47% in 2019. In GroupM’s current forecasts, which include double-digit growth in 2022 and single-digit rates of expansion beyond that, the U.S. is trending toward 71% of industry-wide revenue coming from digital advertising by 2026. Investments in streaming services are occurring at a significant scale in theUnited States, and profoundly impacting TV consumption.

New rules related to digital media in China have not yet had any meaningful impact on advertising growth at an industry level. The Beijing Olympics will likely have a modestly positive effect on the total market, although, as with japan in 2021, the effect on the host country won’t be particularly noticeable.

The United Kingdom has a world-beating forecast among major markets with 35.7% growth now expected for 2021.

At an industry level, Television is clearly the next-most important medium after digital. In its broadly defined form (but excluding political advertising in the United States, which otherwise skews year-over-year growth rates globally), GroupM forecast that global television advertising will grow by 11.7% in 2021. Given the depths of 2020’s decline, which amounted to a loss of 13.7%, the industry is not expected to return to 2019 levels until 2023, excluding the US political advertising. 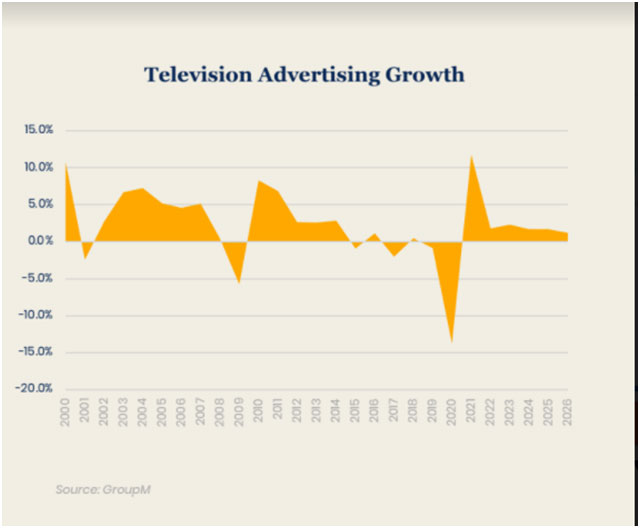 Overall, total TV advertising should amount to $171 billion in 2022 and, of that figure, approximately $17 billion will go to Connected TV+. Covering the digital extensions of professionally produced television content, Connected TV+ remains poised to grow substantially, with our forecast for 2026 now up to $33 billion. Most marketers are keen to capitalize on the rise of Connected TV+advertising, both because of the heightened reliance on data and because of the growing availability of programmatic inventory.

Magazines and newspapers—at least those that have survived the sector’s upheavals—have shifted aggressively to invest in digital capabilities. Increasingly, titles that might once have been launched as magazines or national newspapers are digital-only.

Beyond 2021, we expect continual low- to mid-single digit declines for the business, including its digital extensions.

In many markets, audio and outdoor advertising have experienced similar trends, perhaps because of their generally local market-specific orientation and perceptions that each is primarily consumed away from home. Overall, both mediums posted mid-20 percentage point declines at a global level last year before beginning a gradual, if incomplete, recovery that we think will be punctuated by elevated growth in 2022. Around the world, we expect audio to grow 15.6% in 2021 and 6.4% in2022, while we expect outdoor to grow 17.1% in 2021 and 14.9% in 2022.

In the audio category, digital streaming services and podcasting-related revenues have become increasingly important parts of media plans and are critical to helping the industry avoid decline given its relatively unfavourable mix of smaller, locally constrained advertisers.

Meanwhile, in outdoor, the growing availability of digital screens is helping expand the capacity of the industry, while greater numbers of marketers, such as those in the technology and luxury markets, look to capitalize on outdoor’s unique capacity to reach individuals in the world’s largest cities.