The much-awaited Malayalam Superhero movie Minnal Murali will be streamed on Netflix from December 24. The homegrown Superhero movie with Tovino Thomas as the central character narrates the story of a tailor who gains special powers after being struck by lightning. The film which was formally announced in 2019 caught headlines for its extensive pre-production works, the theatrical release was postponed multiple times due to the pandemic. Later in September 2021, the makers announced that the movie will have an OTT release through the streaming platform Netflix. The film which was screened at Mumbai Film Festival on 16 December, before its premiere on Netflix has gone to receive rave reviews from the viewers and film critics. Planned as a pan-Indian film, Minnal Murali will be released in 5 languages namely Malayalam, Tamil, Telugu, Kannada, and Hindi.

Netflix India has pulled out all the stops for the promotion of Minnal Murali and has been successful in creating a buzz around the release of the movie through a 360-degree marketing approach. Minnal Murali is one of the biggest bets by Netflix in the regional movie space, reportedly the streaming rights of the movie was acquired for a record price.

The marketing activities for Minnal Murali grabbed the eyeballs of many, through teaser and trailer releases to comic ads, the team has implemented the promotional activities in the most seamless and innovative ways.

Muthoot Fincorp has joined hands with Netflix to celebrate the launch of the Minnal Murali through a campaign titled ‘Minnatte Life’, which translates to ‘let life shine forth, builds on ‘transformation’, which is one of the fundamental themes of the film. The campaign urges the people to use the right opportunity to change their lives for the better. The video campaign portrays the life of people in the fictitious village ‘KurukkanMoola’ and how their lives are changed at the speed of lightning and instil hope and self-confidence.

The video campaign is a huge hit with more than 8 Lakh views in 48 hours on YouTube. The ad film is directed by Basil Joseph who is also the director of Minnal Murali.

Minnal Murali is posed with the ultimate question of strength. Can he survive The Great Khali’s chokeslam? asks the description below the YouTube video.

Netflix India released a promotional video featuring Great Khali and Tovino Thomas. In the video, Tovino is seen taking the superhero test while exhibiting his newfound superpowers to Great Khali.

The video has garnered over 3 million views and is trending on YouTube.

One of the most innovative methods Netflix India has resorted for the promotional activities of the movie is the Minnal Murali comics. A series of comic strips were published in the Malayalam daily Malayala Manorama. In the comic strips, the Superhero was seen meeting Thunder Woman, straightening the leaning Tower of Pisa, and travelling to the Bahubali world. 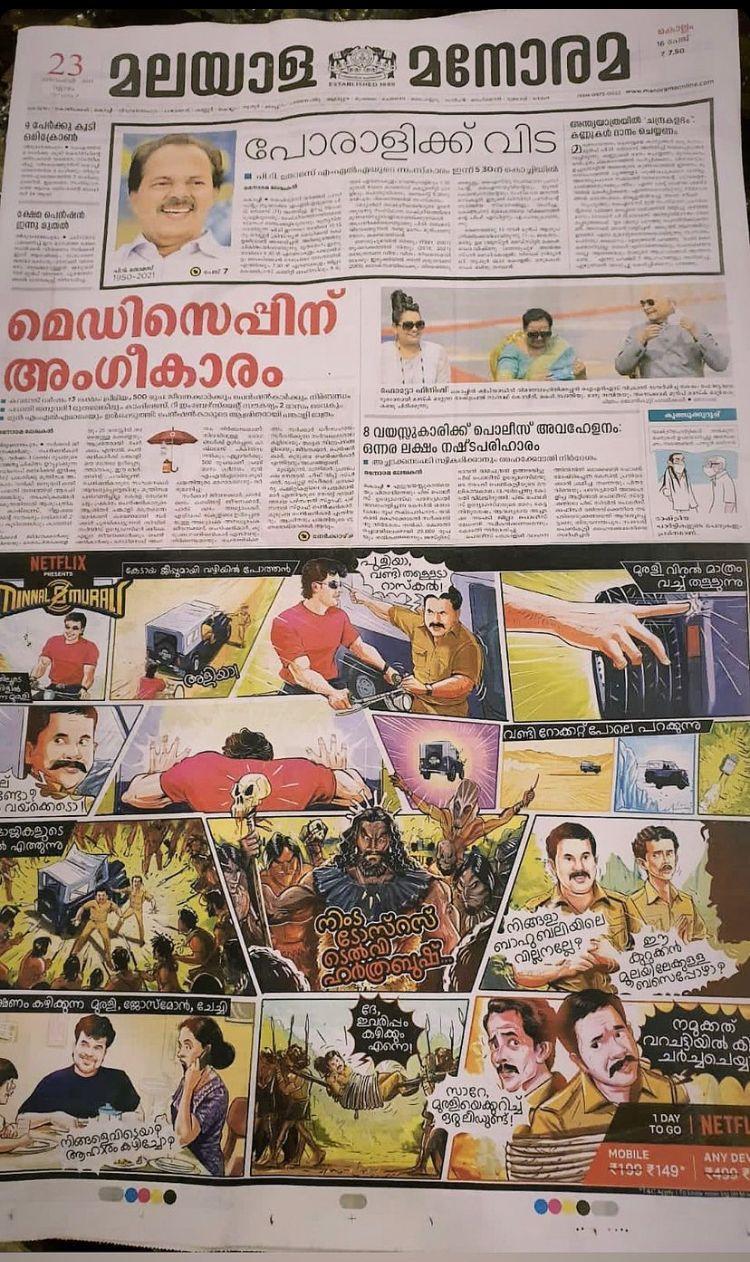 Minnal Murali has received its own emoji on Twitter, thus becoming the first Malayalam movie to receive the Twitter emoji The emoji will now be available on Twitter with the hashtag ‘Minnal Murali’.

Hitting 6 sixes in an over is a superpower. A superpower Yuvi think’s Minnal Murali has! reads the description below the YouTube video. The video is trending in number 1 position on YouTube with more than 2 million views within 20 hours.

The series of promotional activities carried out by Netflix India for Minnal Murali is the biggest any regional movie has received by far. Last time Netflix India went on a promotional spree was for Kota Factory Season 2 launch where they have leveraged Jeetu Bhaiyya’s fan base and popularity. Recently Netflix has announced new and reduced prices for plans in India, with the mobile-only plan now starting at Rs 149 per month. This along with the 360- degree marketing campaigns and the home-grown Superhero (who doesn’t have a theatre release) will surely help Netflix India to expand its user base amidst intense competition from other streaming platforms.

Schbang, the creative and technology transformation company, is launching a content production service, the Global Content Hub. The services offered...

Newspapers that announced India’s freedom: The Times of India