Indian Films do much better than Hollywood films in the Gulf: Rishika Lulla Singh, Eros Digital

Part two of the Leaderspeak with Ali Hussein and Rishika Lulla Singh covers their views about the Gulf market, innovative distribution strategies, the NTO and a lot more.

What is your understanding of the Gulf Market, you must be knowing quite a bit about it since you have announced the alliance with Vodafone Qatar?

Ali: In this region we are looking at the localization of content. Interestingly, the Middle East is one segment, where the South Asians end up watching more South Indian content. It’s the local Arabs that actually prefer some of the Bollywood content. So getting into a strategy of dubbed or subtitles, looking at what kind of titles work in terms of the evergreen titles, the classics versus the new content, developing personalization layers for them on the consumer service, looking at partners for distribution. With a combination of these things, in terms of also looking at pricing, depending on what the price sensitivities are and what the sweet spot is of the pricing.

Rishika: If you traditionally look at the studio side of the business and the Middle East box office collection, Indian language films actually gross higher than Hollywood language content or English language content and the own industry in itself is very nascent in terms of storytelling and local production. So we also have the learnings from the studio business to actually understand the highest points of demand for this content beyond a theatrical universe. 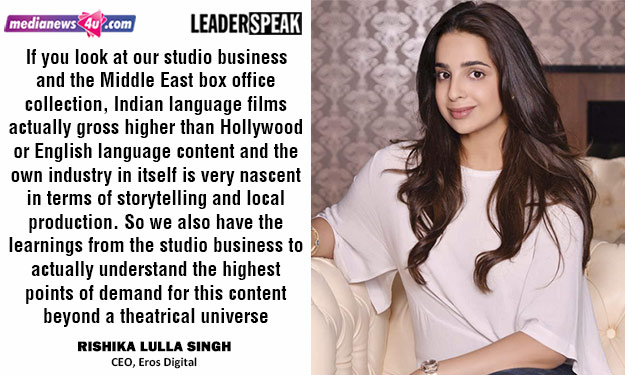 Which are the other distribution strategies Eros Now is exploring probably in-flight entertainment or any other interesting strategy perhaps?

Rishika: We have signed a deal with British Airways and Emirates where you have Eros Now branded channels and services for in-flight entertainment. It’s a great point for the consumer to actually have an interaction with the brand. It’s fantastic, because you don’t have internet and the rest of these kinds of connectivity issues to actually distract you from consuming and understanding the brand. So for us, that falls into distribution and marketing, in terms of combination to actually ensure that you spread. I think the tie up with international well-known brands and our Eros Now becomes really important for us, because you have the positioning of Eros Now with British Airways that automatically elevates your brand when you start positioning yourself from a consumer mindset. So it creates that premium demand — that want and that need — which we are able to then fulfil.

How do you think put Jio will disrupt the industry once again, this time with JioFiber and particularly the cinema business with the first day first show proposition of JioFiber?

Rishika: If you look at our history, we’ve always been early adopters of technology and we believe that content is made to be distributed and reach the correct eyeballs. So JioFiber’s First Day First Show is just another form of distribution. I think for cinema owners, it will also be interesting, if you look at what’s happening in the West, you’ve actually seen the decline of footfalls and the cinema, you see large franchises nowhere near cross in what they’re expected to cross. So it actually provides another mode of monetization as well, for the content owners without having to worry about the box office.

This will also lead to better and deeper penetration as well. Because certain villages don’t have access to go watch this content and people want to consume it. I personally it enables believe a larger footprint for content creators to actually access, therefore creating another monetization opportunity.

As a content creator, distributor and an OTT platform in the entertainment business, what are your views on the whether TRAI should change anything in the New Tariff Order because they are reviewing the NTO and chances are that there might be a revision in the scheme of things.

ALI: What the regulator decides finally is in their control. Eros is not a broadcaster but if you’re a broadcaster, then there’s a direct impact.It is important to understand in terms of what the consumer’s propensity to pay is for that particular product. I think a generalization in general for anything doesn’t work. It is all about what is custom and curated for a particular audience or a type of audience.

Based on regional audiences, there’s a massive audience, they get to focus on watching the channels they like. So there’s a massive positive that is entailed with the thinking behind it. Obviously, we’re yet to see in terms of what the final white paper turns out, and the final order that comes out and how it will be implemented.

From a digital perspective, I’m just saying what they’re trying to create is an even playing field, saying that A-B-C or D the consumer makes the choice. So it’s like a pro-choice environment, which is a very good thing in general. 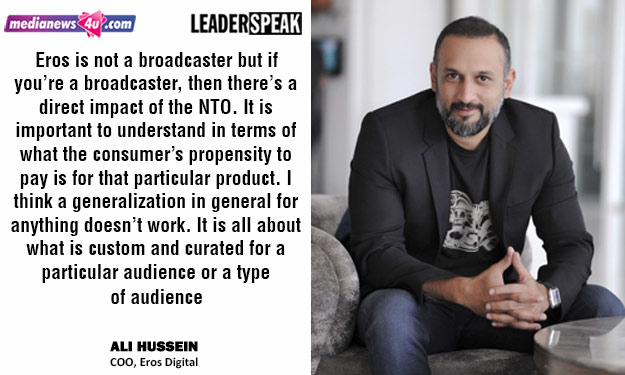 What do you think about the recent OTT platforms that are collaborating, associating and co-curating content? Why do you feel these platforms are taking such a step?

Rishika: I actually think it’s fantastic. If you look at an environment where there’s increased competition, and actually breeds grounds for increased collaboration, so when I think from a consumer perspective, it’s fantastic because they get a lot more at their fingertips. If the consumer is happy, it’s essentially a great place for the industry because as the consumer grows their choices grow, the industry grows as well. So it actually may be quite interesting to see how the alignment pans out over the next 18 months. It’s a market that is definitely keeping everyone on their toes.

I think it’s fantastic that two Indian OTT platforms have collaborated. It creates a really beautiful story for us, as we have a lot of counterparts, looking outside for penetration.