Mumbai: Demand in Tier-II cities for dentists, dermatologists, and orthopaedics stayed ahead of Tier-I even though there was a 9% YOY rise in searches for these medical specialists across India, revealed the latest Just Dial Consumer insights. 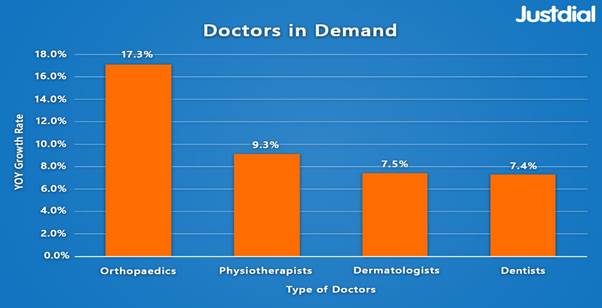 Commenting on the consumer trend, Prasun Kumar, CMO, Just Dial, said, “Being India’s No.1 hyper-local search engine, Just Dial understands the pulse of the local health care market and provides credible information to care seekers and providers. It is heartening to see consumers even in Tier-II and Tier-III towns using an online platform like Justdial to seek healthcare information and services.  This augurs well for the growth of the category as it will help disseminate products and services to last-mile users using online platforms.”

Among Tier-I cities, Mumbai topped the list of searches for dermatologists followed by Delhi and Hyderabad in the second and third place respectively. Pune, Kolkata, Chennai, Ahmedabad, and Bangalore complete the list in accordance with the demand. Patna topped the list of Tier-II cities and the number of searches was greater than Bangalore. The cities of Kanpur, Hubli-Dharwad, and Bhopal completed the list of top-5 in Tier-II.

Mumbai and Delhi were again the top-2 cities when it came to generating maximum searches for dentists, contributing almost 50% of the searches taking place in Tier-II cities. Bangalore, Chennai, Kolkata, Pune, Hyderabad, and Ahmedabad completed the list in accordance with the demand. Two cities of UP, Noida, and Lucknow saw maximum searches for dentists followed by Bhopal, Hubli-Dharwad, and Coimbatore among the top-5 Tier-II cities.

Demand for gynecologists in both Tier-I and Tier-II cities remained stable. Mumbai saw maximum searches among Tier-I cities with Delhi in the second place. Kolkata, Hyderabad, Chennai, Pune, Ahmedabad, and Bangalore made up for the rest of the demand in Tier-I cities. Patna and Jaipur generated maximum searches among Tier-II cities for gynecologists while Kozhikode, Indore, and Lucknow made the list of top-5.

Searches for orthopaedics rose by 17% YOY across Tier-I towns with Mumbai and Delhi generating 65% of the searches online. Kolkata, Hyderabad, Pune, Chennai, Ahmedabad, and Bangalore made up for the rest of the demand in Tier-I cities. Patna, Lucknow, Jaipur, Nagpur, and Ranchi were the top-5 cities in Tier-II generating maximum demand. 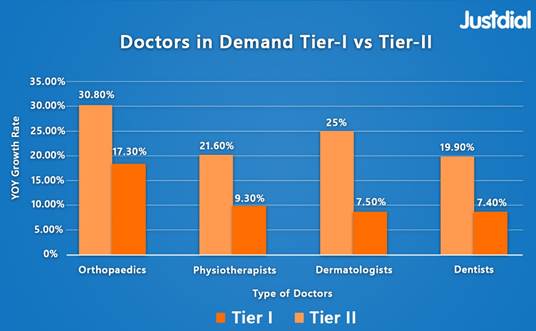 For physiotherapists, Pune topped the list with the maximum growth rate in terms of online searches, but the bulk of the demand was generated by Mumbai and Delhi while Hyderabad, Pune, Chennai, Kolkata, Bangalore, and Ahmedabad made up for the demand in Tier-I cities.  Among Tier-II cities, Patna topped the list generating maximum demand followed by Jaipur, Chandigarh, Lucknow, and Nagpur that made the list of top-5.

toothsi, India’s leading smile makeover brand, has signed on Anushka and Virat as brand ambassadors to promote and encourage the...