Mumbai: Three days ago, Mumbaikars and Delhiites were surprised by an OOH campaign that had various well-known FMCG brands like Pepsi, Maggi, ITC Dark Fantasy, Cadbury Dairy Milk, Red Label Tea, and Amul Lassi come together with the same message #13thKiTayyari. The creative showcased products from different corporate houses but had the same message which intrigued netizens for the last 3 days. These messages across all the important junctions teased audiences about a big launch on the 13th of July for which the readers were asked to store up on beverages and snacks. Eminent personalities like Anant Rangaswamy, Suresh Raina, and others also tweeted about the campaign. #13thkitayyari quickly became the 2nd most trending subject on the 10th of July. 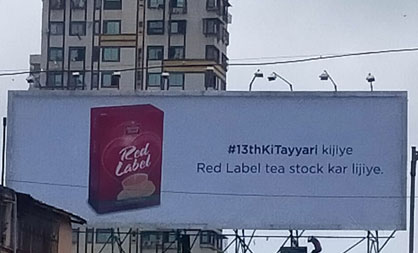 Today the mystery was solved….

The campaign was revealed to be an announcement by Zee Entertainment Enterprises (ZEE) for fresh content to be aired on ZEE TV from 13th July. All channels are starting to air fresh content after a long hiatus of 3 months. The teaser campaign by Zee is a part of their big bang comeback multimedia campaign ‘BanegiBaatSaathSaath’.

The entertainment industry and outdoor media were both hit badly due to the lockdown. This is an interesting way to use outdoor media, especially at a time when there is ample availability of space and, as data proves, people have started stepping out of their homes as India ‘Unlocks’. Hence, the hoardings have gained a lot of visibility.

Brand collaboration at this level has also not been seen in the recent past. As Twitted by Rajesh Kejriwal, Founder CEO, Kyoorius Group, “Using OOH for a campaign backed by an idea works well.”

Atul Shrivastava, CEO, Laqshya Media Group said, “We are thrilled to partner with ZEE for their comeback announcement. This is a massive 600-sites campaign across 22 cities across India – that was executed under strict health supervision”.

He continues: “The power of the outdoor medium with the might of the partner brands and the ZEE network created a tremendous buzz on the ground around the campaign. The message of solidarity from ZEE resonates with the partners and viewers alike and we look forward to more fruitful associations through the coming half of the year. The buzz created on the ground, and on online media, also reinstates the power of OOH in the minds of brands. With strategic planning, OOH helps in delivering the message and creates an impact that is remembered for a long time. With more people coming out on the roads since the nation was unlocked, we strongly believe that outdoor media will have a bigger comeback than ever before.”