by Editorial
in Exclusive, Featured, Market Analysis
Reading Time: 6 mins read
A A

Mumbai:  KPMG in India today launched the 11th edition of its Media and Entertainment (M&E) report, titled ‘India’s Digital Future: Mass of Niches’ that examines the evolution of India’s digital demography to 2030. It also covers the industry’s performance across segments, along with the key underlying themes and growth drivers.

The M&E industry in India posted a solid growth of 13 per cent during FY19 to reach a size of INR1631 billion with a CAGR of 11.5 per cent over FY15-FY19. Digital has been a recurring theme across all segments of M&E causing disruption in TV and print and fuelling growth in digital advertising and gaming. The digital market is poised to become the second largest segment in India after TV, and also attract the maximum advertising spend by FY22. There are favourable factors for both digital access (smartphone penetration and low data costs) and content supply (investments in original and regional digital content), which together will continue to drive up online consumption. The investments in regional content is an outcome of the growing importance of regional language markets in India, which is another key theme of the report this year. With the digital migration of English speaking audiences almost complete, most new users coming online – and there are expected to be 500mn of them by 2030 – will access the internet in a local language.

The 500mn new users by 2030 present digital businesses with an unparalleled market opportunity but not without some complexity. Segmentation will become important as the market evolves into a ‘mass of niches’. The report examines major consumer archetypes that together provide a framework to better understand the socio-economic profile as well as media and entertainment consumption patterns and preferences of the projected billion internet users.

The greater monetisation of emerging digital business models, and a favourable regulatory and operating environment should continue to support the growth of the M&E industry in India, which is expected to post a CAGR of 13.5 per cent over FY19-FY24, to reach a size of INR3.07 trillion.

Girish Menon, Partner & Head Media & Entertainment, KPMG in India, said, “The theme of the report this year is India’s digital future – and although the term ‘digital revolution’ has become somewhat of a cliché, there can be no other way to explain the extent of digital integration in our lives today. With no major constraining factors, digital is expected to be a dominant force going forward and in FY23, it is likely to be the second largest segment after TV and attract the highest marketing spend among all media formats. In 2019, as digital behaviour evolves, there seems to be a growing consensus that in the future, subscription models will have a greater role in monetisation of digital platforms. Further, evolving technologies are also presenting opportunities for companies in the media and entertainment industry to achieve greater operational efficiencies.”

Girish added, “In the coming years, it will be hard to ignore the pessimistic signals emerging from global economies but they will not have long term impacts on the industry and are unlikely to alter the strong fundamentals and momentum of M&E consumption, especially digital, in India. As an industry, we will remain upbeat on the prospects for both.”

Satya Easwaran, Partner & Head Technology, Media and Telecom, KPMG in India, said, “By 2030, we estimate that there will be a billion people in India who are connected to the internet. Our initial hypothesis is that the user will primarily be a non-English speaking, mobile phone user, from a developed rural area/non-metro urban setting who is increasingly willing to pay for content online. But why is the profile of India’s digital demography relevant? The digital disruption has forced a pivot of business models in media and entertainment from an erstwhile B2B2C model to a D2C one. And therefore, segmentation and demographic, psychographic and behavioral profiling will all become increasingly important, as they have historically been in other consumer businesses.”

The Digital segment continue to be strong enabling factors encouraging greater consumption of content on the internet in India. It is reflected in the growth in broadband internet subscribers at 37% for FY 2019, which beats overall growth in internet users at 29%. Today, Internet access is also more equitable and the growth in rural users is almost three times that of the urban.

TV – Waking to a new reality

The print media industry survived ups and downs over a period of FY2018 witnessing a rough patch due to disruptions caused by the implementation of the new GST regime, RERA regulations and demonetisation with the lowest growth in a decade at 3.4 per cent. Globally the print industry is on the decline with newspaper’s share of global advertising spend falling from 37 per cent in CY08 to 12 per cent in CY18, the Indian print industry continued to buck trends and grew at 5.6 per cent CAGR from FY15 to FY193.

It was a groundbreaking year at the Indian box office, which delivered its best box office performance in the past decade as content took centre-stage with movies of diverse budgets succeeding at the box office. A key ongoing change has been the growing contribution of digital rights, which has grown by 30 per cent in FY19 in line with the previous year driven by heavy demand by OTT platforms who consider new movies as a key differentiator. In FY2019, domestic box office collections grew by 14.7 per cent.

Digital revolution has been the primary contributor to the remarkable growth of online gaming in India. The estimates of the gaming industry in India indicates a growth of 26.4% in the CAGR of 2015 – 2019.

Out of home – Embracing digital

OOH (Out of Home) is a versatile advertising medium on account of various advantages it offers over other forms of media such as high coverage in terms of area, better brand positioning, given the larger size of image and higher target audience reach of almost 80 per cent. The OOH industry has witnessed close to 11 per cent CAGR over the last five years, growing from INR 20 billion in FY14 to INR 34 billion in FY19.

Radio & Music – Waiting to be heard

The industry saw impetus coming from the increase in spends due to elections. While the real estate sector continued to face slowdown, the sector spends on radio continued to liquidate existing inventory. The growth during the FY19 has remained weak at of 6.17 per cent.

NTO – A paradigm shift: Post the new regulatory framework for broadcasting and cable services introduced by the Telecom Regulatory Authority of India (TRAI), viewership is likely to be concentrated across fewer channels aiding large broadcasters and channels with appealing content. They stand to benefit from higher subscription revenue as well as gain greater pricing power. Further, some of the large broadcasters have also taken a strategic call to move the Free-to-air (FTA) variants of their popular General Entertainment Channels to the Pay regime, with a view to ensure that subscribers pay for the content they wish to watch.

Regional markets – Moving into the limelight: In FY19, the growth in advertising revenue for regional channels has been around 16-17 per cent. The large audience size combined with their preference to consume content in their preferred language has led to media platforms expanding their portfolios to offer dedicated regional language content. Consumers are also spending 35-43 per cent of time on regional videos on digital platforms.

Skill development – The learning imperative: Owing to the digital disruption, the world of media and entertainment is changing with a new composition in the workforce. The India Inc’s capability to ideate, innovate and execute eventually leads to disproportionate value creation for the enterprise. This shift requires constant upscaling and upskilling of the workforce. The traditional job roles have either completely changed or have totally ceased to exist with a decrease of 8 per cent in online media, 9 per cent in print and 5 per cent in broadcast media.

Digital privacy and content – Bridging the monetisation gap: In today’s marketplace, customised environment and recommendations are the norm and it provides organisations an edge over their competition. They are using Content Delivery Networks (CDN) to speed up content delivery on websites with high traffic based on location. In order to provide such services, media companies are now monetizing by collecting huge amounts of data to create customer profiles in a new and unique way.

5G – Technology trends in M&E sector: 5G will increase media usage immensely. The revenue forecast over the next decade (2019-2028) is pegged at approximately USD 3 trillion which the M&E companies will be vying for and the revenue opportunity enabled by 5G networks will be approximately USD1.3 trillion. The year 2025 is expected to be the year when the industry will reach critical mass wherein 57 per cent of global wireless media revenues will be generated on the back of superfast 5G networks and devices. One of the key metrics of 5G performance is latency and since the technology promises latency of <1Ms live streaming and large downloads will happen at supersonic speeds. 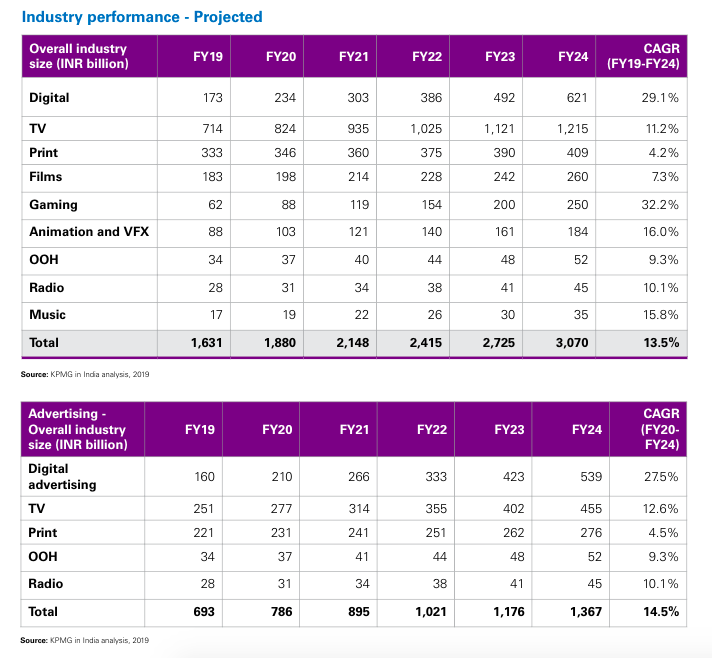