Our intent is to make Locomotive Global Inc. a blue-chip content producer in India: Sunder Aaron

Locomotive Global Inc., is an international production company focused on developing, producing and distributing Indian-themed content for India and the world. It is majority owned by Chicken Soup for the Soul Entertainment (NASDAQ: CSSE)

In an exclusive chat with Medianews4U, Sunder Aaron – Co-founder and principal – Locomotive Global Inc. speaks on the tie-up with Applause & Bend It Films, New productions and vision of Locomotive Global in 2022 – 2023 and much more…..

When was Locomotive Global Inc. launched and what was the vision for the production house?

We launched Locomotive Global Inc. in 2013 with the aim of making films that were not mainstream cinema in India, but would have a global connect. For instance, stories like Lunch box, or Slumdog Millionaire are narrated in India but cater to a global audience. Back then, this was just an ambition, however slowly thingserupted with OTT and streaming so we started to shift focus to premium scripted drama series. Today, we have a number of shows that are in various states of production and development. These projects have been in the works for 2 to 3 years because of the pandemic. We knew that it would take sometime. However, the recent tie-ups have helped us scale the business quickly. Now the vision for Locomotive Global is to make global quality content, both series and films thatare rooted in Indian stories with Indian culture. 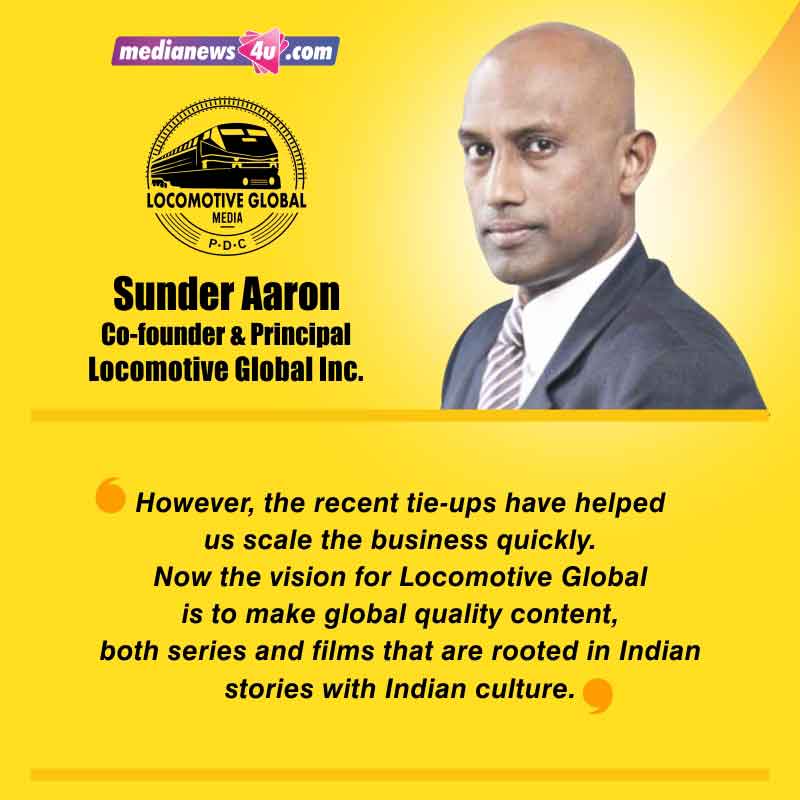 What have been the major production/IP’s LGI has created, also have you acquired any?

At Locomotive, we create original content, but we also acquire rights for formats to remake or adapt them for India. One of our biggest projects in the making is format-based. We acquired the format rights to adapt Showtime’s original series ‘Ray Donovan’ and are producing it for Netflix. The Indian project is called Rana Naidu and features Rana Daggubati and his uncle Venkatesh Daggubati. Rana plays the role of the lead character and Venkatesh plays the role of his father. Since they have never appeared together on screen before, we are all really extremely excited about this duo. We have completed 80% of the shooting and will begin post-production by June. We look forward to releasing Rana Naidu in early 2023.

What made you tie up with Applause Entertainment and Bend It Films & TV?

Sameer Nair is a visionary and a pioneer in our industry. His forward-thinking approach has resulted in Applause Entertainment’s success so far. The team at Applause was keen on doing something at a global level and that is one of the reasons for this collaboration that brings together Applause, Gurinder Chadha and Locomotive.  Applause is extremely courageous with a business model which is risk-taking. Very few studios like them are financing their own projects at their volume and budget levels. And therefore, we decided to associate with a company that has this kind of a forward-thinking strategy. On the other hand, Gurinder Chadha is a global icon who can make a show with a global appeal. Gurinder and I had a project that we created; it was initially called God Man, but now has been re-branded to ‘Seeker’. We are currently at the scripting stage and we are hoping that by the end of the year, we will get into production. 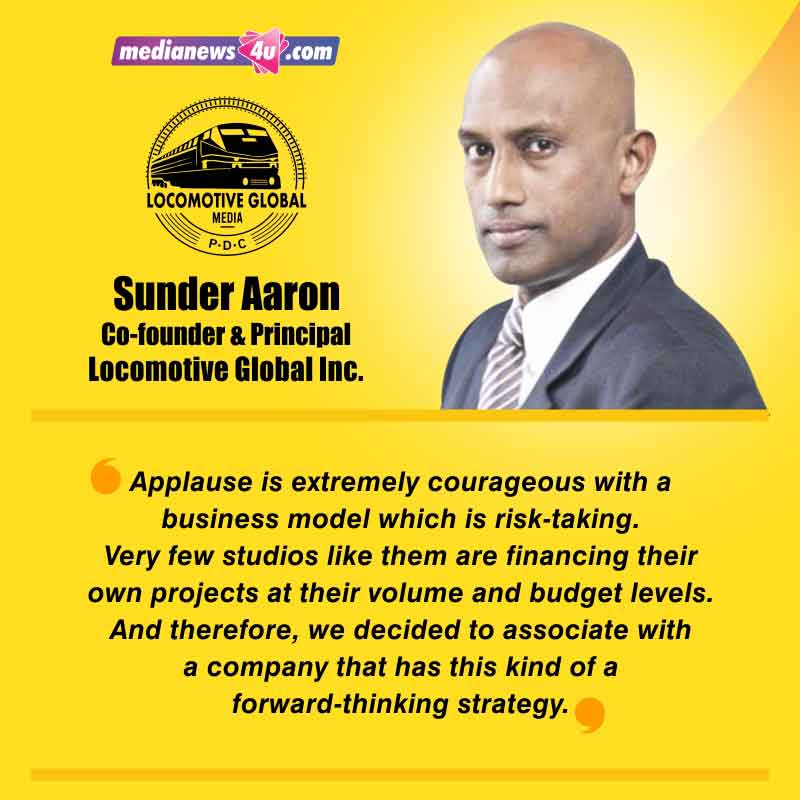 The pandemic was tough; OTT saw a huge surge, what are the trends you are seeing in terms of content in India as well as on a global level?

Right out of the gates, with OTT, everyone was doing thrillers and crime. Some have been successful, while some did not work well. Trend wise, in India, I feel we are going to see more half-hour comedies, not necessarily sitcoms, since it is an inexpensive domain. Globally, drama-comedies or dramedies are flourishing and soon this might become a trend in India. Netflix saw great success with Decoupled and so did Amazon Prime with Four More Shots Please! According to me, the horror genre in India has been neglected.

Indians, especially the GenX, are viewing a lot of Korean content. What do you attribute this to, recently even Mandarin content is being viewed?

Long before streaming video, younger generations have been exposed to heaps of content from all around the world thanks to the internet. They have been very open-minded in exploring multiple mediums, whereas the older generation is still leaning towards broadcast TV. They are slowly evolving. The younger generation has been online, consuming diverse content and prefers to watch content at their convenience, making it extremely easy and comfortable for them to consume Korean content with subtitles.

As a producer what would you want to do to get more GenX and GenZ to watch your shows? And are you seeing this trend globally as well?

It all comes down to the subject of matter. We are looking at projects that are aligned with the interests and entertainment needs of the younger audiences. While making a show, it is crucial to recognize one’starget audience. Instead of creating content that attempts to travel across generations, demographics or markets. A sense of focus in development will allow you to create a show that works for a particular generation or audience. The younger generations in India have been a bit neglected when it comes to content offerings on premium OTT platforms. We don’t see a lot of Young Adult original series from India, whereas this is an important audience to cater to in the rest of the world. We are actively developing projects that will address that need.

We have three shows lined up; one is already in production while the other two will go into production before the end of this year. Our focus is to scale-up rapidly and also hire some senior production executives. We are also looking at collaborating with other companies with strong slates. Our intent is to make Locomotive Global Inc. a blue-chip content producer in India and to be known for producing global quality content that is somehow rooted in India. In the coming years, apart from making content in Hindi and English, we will look at expanding our footprint towards creating multilingual content reflecting culture and stories from South India also. 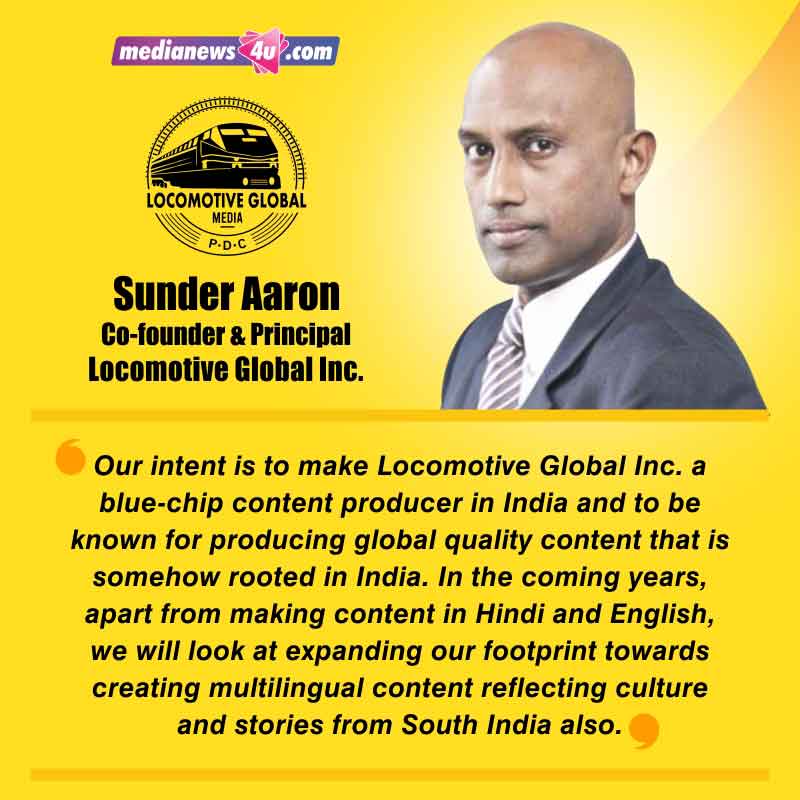