BARC and Nielsen released the third edition of their insights into TV, smartphone and audience behaviour highlighting the changes during the COVID-19 period.

All major sporting activities and live events across the globe has been kept on hold or cancelled due to the COVID 19 Pandemic.

Despite the absence of major live sports and other sporting events, the sports genre witnessed a surge of 21% in week 13 over week 12. For sports broadcaster’s the re-telecasting of old ICC, World Cup and WWE matches on sports channels has resonated well with the audiences. 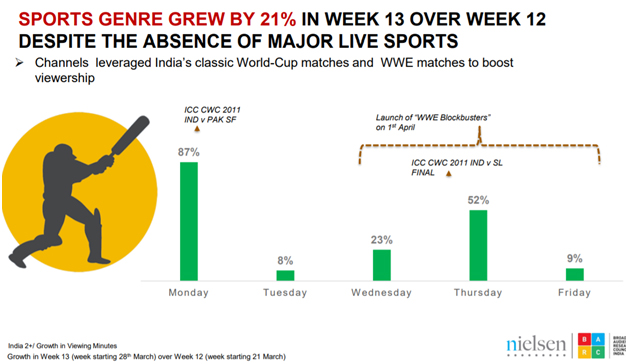 Recently, BCCI and Government of India had announced that they have decided to telecast cricket highlights from the 2000s, this gives a fillip to DD Sports, for the Indian cricket fans a sense of nostalgia to relive the spectacular 2000 era.