Mumbai: Strengthening its cricket portfolio, Star India has acquired the media rights of Cricket South Africa (CSA) till the end of the 2023/24 cricket season, across Asia, the Middle East, and North Africa. The agreement grants Star India exclusive rights across linear and digital mediums including all India tours to South Africa in this period. The association will commence with England’s tour to South Africa starting on the 27th of November 2020 which is the return of cricket on Star Sports Network after its biggest IPL. Star India already has the global rights for ICC, BCCI cricket, Indian Premier League apart from other cricket rights.

“We are delighted to collaborate with Cricket South Africa. This alliance fortifies our commitment to cricket and our belief in the significance of sport in Star India’s consumer proposition. South Africa has some of the most highly recalled Cricketers and competitive teams, which pride themselves in taking on the best from around the world. We look forward to hosting the best of South African cricket till 2024,” said Sanjog Gupta, CEO – Sports, Star India.

“Star India has made significant investments over the years to deepen the relationship that fans have with the game via enhanced story-telling, innovations in broadcast and regionalization. The broadcast of Dream11 IPL was an unprecedented collective endeavor built on the same principles. We will hope to apply the same approach and elevate the consumer experience of CSA’s matches. The partnership will kick off with an England tour of South Africa on 27 November 2020 during which the three T20Is will be broadcast in Hindi for the very first time. This will give these matches significant reach in the Hindi-speaking markets,” he added.

CSA Acting Chief Executive Officer, Kugandrie Govender said, “There are few social events on the South African sporting calendar that rally our fans up as much the cricket-showdown between South Africa, India, Pakistan and Bangladesh, so we wholeheartedly welcome this agreement with Star India. Knowing that the sport reaches millions of people all over the world, which is now further amplified by this Star deal, will see our Protea teams even more powered up to impress fans and to outperform their rivals! We look forward to partnering with Star India and to delivering wicket-smashing cricket until the end of the 2023/24 season!”

The agreement will cover all international cricket matches played by the South African men’s cricket team. As per Future Tours Plan, South Africa will be playing 59 matches at home including series against top teams such as India, England and Australia. With the Indian cricket team scheduled to tour South Africa thrice in this period, this deal comprises of 20 South Africa vs India bilateral matches across formats, with the first of these tours commencing in 2021/22 and comprising of three Tests and three T20Is. The agreement will also cover women’s international cricket matches played by the Momentum Proteasas well as CSA’s domestic men’s franchise matches.

Cricket resumes on the Star Sports network with the T20I matches for South Africa vs England series. This will be a first for Star India for a non-India bilateral cricket tournament to be produced in Hindi on SS1 Hindi, in addition to the English feed. England’s tour of South Africa will consist of three T20Is and three ODIs, beginning on the 27th of November. The upcoming campaign for the series focuses on the battle between the South African pacers, pitted against the strong English batting line-up. This will be the first big series for both teams after the IPL, with strong performers from the season such as Eoin Morgan, Ben Stokes, Joffra Archer, Quinton de Kock, Kagiso Rabada andAnrich Nortje.

Schedule for the upcoming England tour of South Africa: 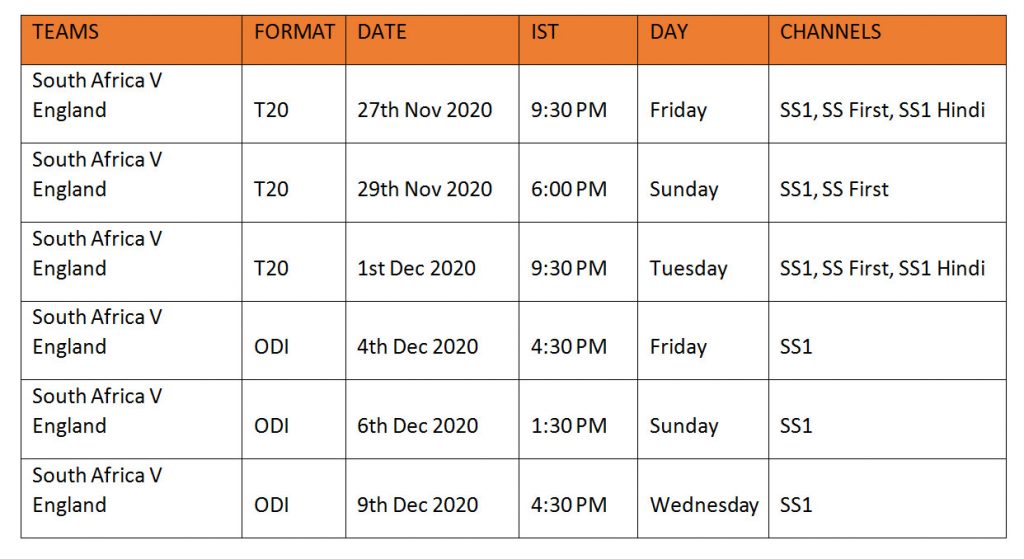