According to TAM Sports Report, on comparison of Celebrity Endorsed Advertising on TV for IPL 15 and IPL 14 for the first 39 matches, there was an increase of 8% in the share of ad volumes in IPL 15 compared to the previous season.

Among all professions, Film Actors led in brand endorsements with 47% share of ad volumes, followed by Sports Persons with 37% share during IPL 15. 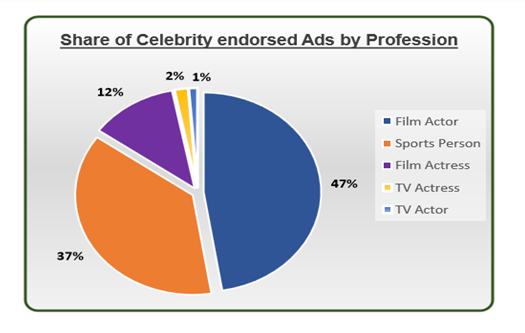 Share of Film Actors endorsed ads per channel grew in IPL 15 by 5% compared to IPL 14. Film Actor and Sports Person together accounted for 85% ad volume share of the total celebrity endorsed ads.

Number of Sports personalities grew by 14% during 39 matches of IPL 15 compared to IPL 14.

The overall number of Celebrities decreased by 17% during IPL 15 compared to IPL 14.

Ranveer Singh and M S Dhoni retained their first place in both IPL 15 and IPL 14.

Ranveer Singh was on top with 9% share of ad volumes during IPL 15. Three out of Top 5 overall Celebrities were common in 39 matches for both IPL. Among the Top 5 Sports Celebrities, M S Dhoni, Virat Kohli and Rohit Sharma were common on both IPL 15 and IPL 14.

Top 5 categories and advertisers accounted for 66% and 48% share of Celebrity ad volumes respectively in IPL 15.