Mumbai:MTV is the universe of the young. Being India’s number one youth entertainment brand, it gets a lot of love, but with great love, comes some hate too, especially in the form of online trolls.

Staying true to its idea of being quirky, bold and edgy, MTV tackled the trolls in its own way-

With a mammoth community of 25MN+ across Facebook, Instagram and Twitter, one of the highest for any brand in India, all kinds of trolling are common to MTV and its talent.MTV decided to turn this online Trash Talk into something meaningful. For each trashy comment on social media, MTV cleaned 1 kg of plastic off the streets for every trashy comment posted on its social handles.

While most symbols of evil can be destroyed, the one like single-use plastic stays forever. It lives on, adding to the waste that is choking our planet. So, with Dussehra around the corner, the brand decided to collect all the Trash Talk it receives on social media and clean the digital filth with a physical manifestation of it on the day that marks the victory of good over evil.

Navin Shenoy, Marketing Head, Youth, Music, and English Entertainment, Viacom18, says“Today’s youth is extremely invested and passionate about causes like the environmental hazards of plastic and climate change. As a creative powerhouse with a finger on the pulse of youth, we are always creating and curating campaigns to catalyze their minds and bring about positive impact. Since MTV is known for having a fun take on everything and being a brand that battles trolls on an everyday basis, we thought why not this Dusshera, let good win over the two biggest evils plaguing today’s society- trash online and trash offline! This was the genesis of #MTVTrashTalk, a campaign for the eco-conscious, digitally savvy generation.” 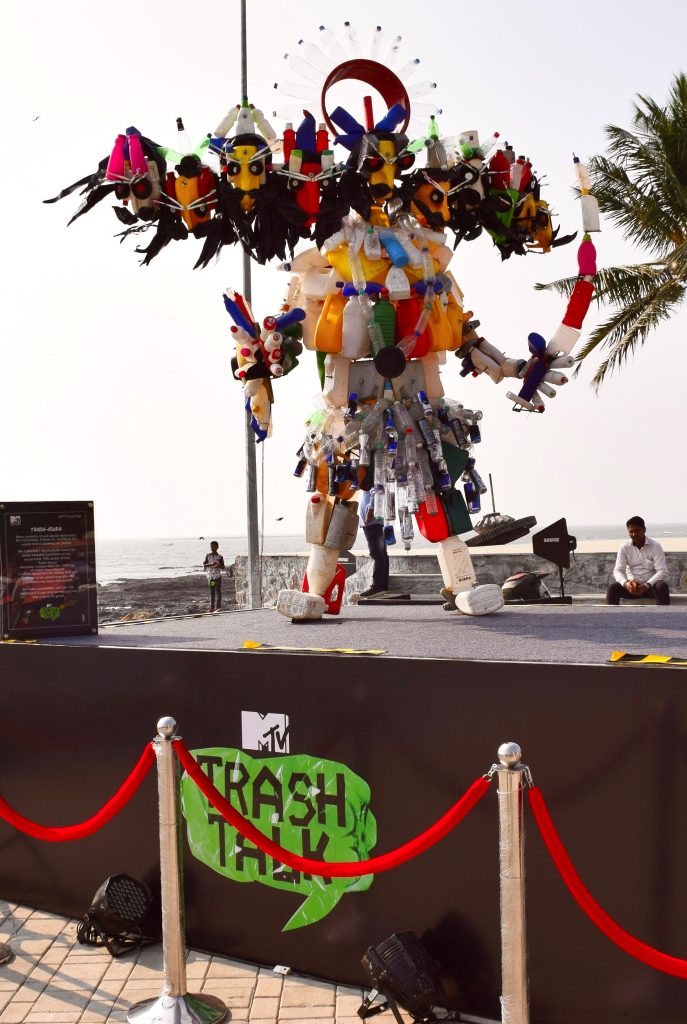 MTV kickstarted the campaignon 25th September with a collection drive of all the hateful comments on social media.For every negative comment that was received, the brand, in partnership with an NGO calledWaste Warriors, cleaned 1Kg of actual plastic waste from the streets of Mumbai. As part of this initiative, MTV managed to clean various locations including Mahim Causeway, Bandra East station, Oshiwara, Bandra reclamation and Carter Road amongst others.

'Desi Girl' Priyanka Chopra ko dikh gaye hai aapke trashy comments. And she seems to be happy about it! Send us your #MTVTrashTalk and see the world get clean thanks to your filth 🙂

'Desi Girl' @priyankachopra ko dikh gaye hai aapke trashy comments. And she seems to be happy about it! Send us your #MTVTrashTalk and see the world get clean thanks to your filth 🙂

Your favourite inspirational icons are taking a stand against the biggest evil of our time – Plastic! Join them and share your #MTVTrashTalk. @priyankachopra @faroutakhtar @yuvisofficial

Your favourite inspirational icons are taking a stand against the biggest evil of our time – Plastic!Join them and share your #MTVTrashTalk.Priyanka Chopra Farhan Akhtar Yuvraj Singh

For this initiative, MTV partnered with renowned artist and sculptor Arzaan Khambatta, to design a model of the modern day RAVANA, named TrashAsura, a 10-ft tall structure symbolizing plastic as the evil in the face of humanity. The installation, made entirely of plastic waste, is a physical and a creative manifestation of the filth received in the form of social media trolls. TrashAsura, made from the 1000kg ofwaste that was collected, will later by upcycled into utilities after the installation will be dismantled on the 9thof October.

The TrashAsura installation is a reminder of what trash- online as well as physical can manifest into if ignored. The 10-feet installation was inaugurated by popular Bollywood actors Neha Dhupia, Dino Morea, Nikhil Chinapa, along with Navin Shenoy, Marketing Head, Youth, Music, and English Entertainment, Viacom18, on 7th October 2019, a day before the festival of Dussehra.

The TrashAsura installation will be dismantled on 9th October 2019 and sent to Aarohana, the partner NGOthat will upcycle the plastic waste into reusable products. Upcycling will involve cleaning the plastic, weaving it into a cloth & making usable products out of it such as duffle bags, cutlery kits, pen stands, etc. So, this how MTV, India’s no. 1 youth brand planned to thrash the trash peacefully and get social media trolls to indirectly curb plastic pollution. Now that’s what’s called a slow burn!

Mumbai: With an aim to empower marginalized sections of the society via sports, Sony Pictures Networks India (SPN), under the...

Kurate Digital Consulting, A Company that aims to bring a dramatic change through Digital Transformation in India

Kurate Digital Consulting, A Company that aims to bring a dramatic change through Digital Transformation in India

Mumbai: Kurate Digital Consulting, one of its kind digital consulting companies, today announced its launch in the Indian market. According...