This Independence Day, Viacom18 celebrates many facets of freedom for Indians

Mumbai: Viacom18 celebrated the country’s 73rd Independence Day with a host of integrated campaigns that celebrated the spirit of today’s India and what independence means to its citizens.  Ranging from COLORS Cineplex’s #freefromhate,MTV’ #SWAGtantra, Nickelodeon’s Mera Wala India to Comedy Central’s#LaughAsOne, these campaigns targeted diverse issues that are relevant to the network’s varied audiences.

Urging netizens to make the internet free from hate, COLORS Cineplex launched a positivity challenge 5 days before Independence Day on social media – byasking people to put up positive things or to delete a negative comment and replace it with a positive one using #freefromhate. The challenge concluded with an impactful film that was released on the channel on Independence Day that touched upon the subject of trolling. The film left viewers with a take away of simple step against cyber bulling and urged them to post a positive comment to make social media #freefromhate.  The campaign reached out to the channels’ 56 M social media followers. Television and Bollywood superstars came forward to support the #freefromhate campaign such as Deepika Singh, Namik Paul, Anita Raj, Nimrit Kaur, Sidharth Malhotra and Parineeti Chopra. 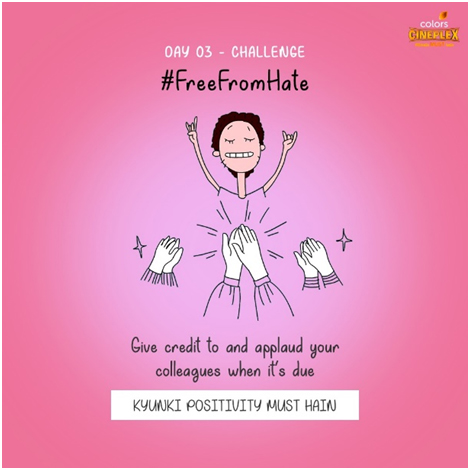 As India’s first crowdsourced Rap anthem, #SWAGtantracertainlystruck the right chord with MTV’s loyal following this Independence Day. The SWAGtantra rap reflected the voice of young India. The Rap anthem was an upbeat composition based on five words: Tamasha, Bharosa, Pahad, Guroor and Jalebi that were sent in by rap lovers across the country prior to Independence Day. Post the scanning, the best rap verses were featured in the Swagtantra Rap. Combined with the creative expertise of these gifted rappers, who are mentored by the judges Raftaar, Nucleya and Raja Kumari, the Swagtantra Rap was instrumental in giving an edge to the young rap lovers and reinforce a wave of change with the power of words and music. The #SWAGtantra campaign celebrates the rap mania that MTV Hustle has brought to India.

Swatantrata ki leher phir jaag chuki hai, but this time with a hip-hop twist!Thanks to all those who participated in…

Nickelodeon – India’s leading kids’ entertainment channel has always ensured to celebrate every occasion with a twist reinforcing the significance of every festival by reinventing its true meaning. This Independence Day, the channel addressed the challenges India is facing despite being in the 73rd year of Independence through their innovative campaign– ‘Mera Wala India’. Taking a cue from what the ideal India should be from a kids point of view the channel brought alive a child’s version of an ideal independent India.

As a part of the initiative, the campaign witnessed children across schools conducting a Reverse March to address issues like water conservation, safety, cleanliness, education for all and stereotyping. Popular Nicktoon Shiva led the reverse march across cities encouraging positive behavioural change amongst kids. With the help of its digital and social media reach, the campaign encouraged children, urging them to express their version of ‘Mera Wala India’ and take a pledge to extend this positive change towards the society not only amongst the kids but also amongst adults.

Comedy Central – India’s leading 24-hour English Entertainment channel had a simple message this Independence Day with their campaign #LaughAsOne. Keeping true to the its promise of being YourHappy Place,the channel’s campaign was an interesting take on laughter. Committed on making India laugh this Independence Day, Comedy Central’s #LaughAsOne celebrated the country’s diversity because laughter has no race, religion, distinction and prejudice.

While each brand film enlivened the distinct identity of its audience, these campaigns by MTV, COLORS Cineplex, Nickelodeon and Comedy Central celebrated the unique identity of Viacom18 – network with a humane purpose.