With a total of 77 million inhabitants, Central Asia represents a large market for telco operators. But the local political, geographical, and economic contexts have been constraining the development of wireline and wireless connections over the last two decades. Looking at the evolution of TV markets in the region over the past three years, we nonetheless observe growing opportunities for operators and broadcasters.

Since 2018, very few foreign telco operators remain active in the region. MTS terminated its operations in Turkmenistan in 2017. Telia also exited the region and sold its operations in Tajikistan to the Aga Khan Fund for Economic Development in 2017, in Kazakhstan to the state-owned company Kazakhtelecom in 2018, and in Uzbekistan to an Uzbek government-owned entity in 2018. The last major foreign telcos active in the area are Russian Veon, which operates the brand Beeline in Kazakhstan and Uzbekistan, and Megafon operating in Tajikistan.

Local markets are dominated by state-backed entities: Kazakhtelecom, Uzbektelecom, Tajiktelecom, Kyrgyztelecom, and Turkmentelecom. In Turkmenistan, the state-owned telco is not challenged by any competitor. In other markets though, there are three to five active mobile network operators who often also provide broadband services. Mobile penetration reaches 135% of the population in Kazakhstan and 118% in Kyrgyzstan. As mobile operators in the region are getting more and more data subscribers, they develop additional services including video-on-demand and OTT pay-TV plans for mobile devices. In Kazakhstan, mobile OTT pay-TV is leading the growth of the pay-TV segment. Kcell’s OTT service, branded MobiTV, was launched at end of 2016 and reached 850 000 paid subscribers at Q3 2020, more than 10% of its mobile subscriber base. Veon also launched a mobile OTT, BeeTV, in its operative markets in 2019 through a partnership with Russian streaming service leader Ivi. In Kyrgyzstan, mobile operator O! launched a similar offer in 2016, and Megacom launched MePlay last year.

Meanwhile, the development of fixed wireline broadband connections enables operators to develop IPTV services. In Uzbekistan, where the broadband market is highly fragmented between several tens of internet provider services, most operators are offering interactive TV services through broadband connection for 10 to 30% of monthly internet subscription fees. To keep up with this increasing competition, legacy cable operators also started offering broadband and IPTV services for the last four years, like Spectr-IT, Stark-TV, Freelink or Avianet. In Kazakhstan, IPTV already reaches one-tenth of TV households.

TV networks in the area are dominated by state-owned or state-backed companies whose owners are often related to the administration’s officials. State administrations still have an overwhelming influence on media outlets. In Kazakhstan for example, public funding still accounts for more than 80% of TV networks revenues while the advertising market remains small. In Kyrgyzstan, media outlets ownership is largely opaque and complaints emerged over the past few years to point out an overall lack of public funding, which could jeopardize TV networks sustainability. 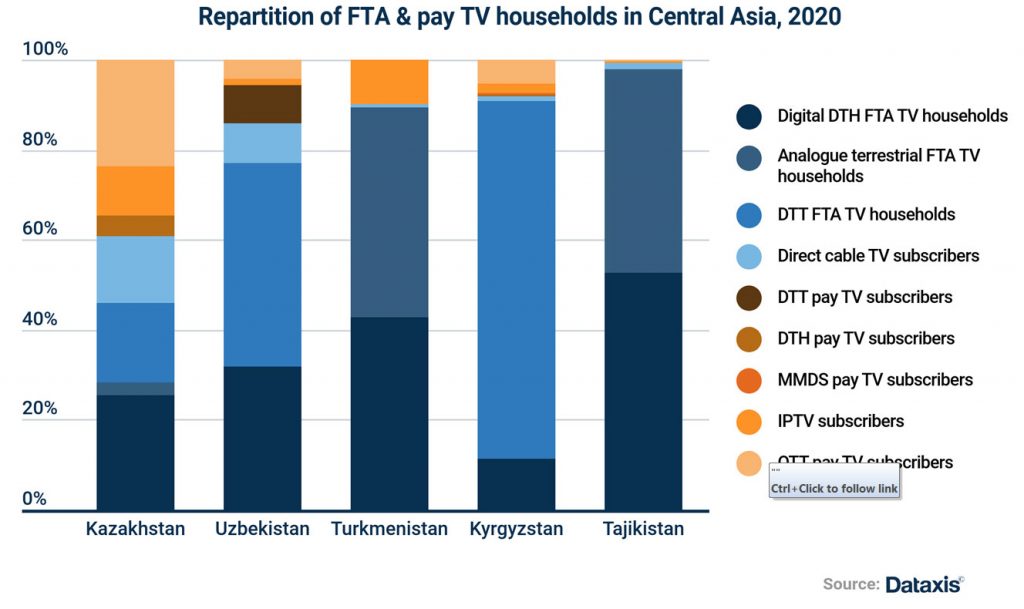 In Tajikistan and Turkmenistan, the government directly operates all national channels. Both countries did not start their transition towards digital terrestrial TV as of now. Tajik authorities planned on launching DTT in 2015 but failed to meet technical requirements and postponed it for over 5 years. Tajikistan issued a few licenses for private broadcasters, but those are only localized and mostly operated by cable TV companies that have a very limited reach.

Nevertheless, some new opportunities are emerging for broadcasters. In Uzbekistan for example, private networks were virtually nonexistent until 2016. Since then, the new President has amorced a slow liberalization of media and telco industries, enabling several local private channels to broadcast on free TV bouquets. Sevimli TV, Z’or TV and Milliy TV for example were launched between 2016 and mid-2017. TV viewing ratings showed that those networks were more popular in 2019 than national state-owned TV channels. Between 2016 and 2019, Uzbek broadcasters’ TV advertising revenues have more than doubled in local currency. But a huge drop in the value of the Uzbek som in 2017 significantly impacted the local economy’s value.

TV viewers in the region still consume foreign media despite periodic political tensions between local authorities and neighboring countries. Main Russian outlets operate in the area but are constrained by obligations of registering local entities to broadcast nationally. Localized versions of Russian channels such as Channel One, RTR-Planeta, Mir, NTV, or TNT are broadcasted in the region, mostly on pay-TV bouquets. Gazprom-Media, the owner of Russian outlets NTV and TNT, launched its dedicated OTT pay-TV services in the region: TNT Premier was launched in 2018 in several CIS markets including Kazakhstan and Uzbekistan and NTV Plus service was expanded to Central Asian markets in the first half of 2020. Several Russian video-on-demand services are also available in the area and partnering with local telcos through bundled offers to expand their subscriber base like Amediateka, Ivi, and Megogo.

The TV markets in Central Asia will be discussed during our conference, Nextv Central Asia Caucasus which will take place on the 8th June 2021. Click here to view all our upcoming conference for 2021.