Twitter users in India are mostly happy with the platform’s acquisition by Elon Musk: YouGov Survey

Last week Twitter announced its acquisition by Tesla and SpaceX CEO Elon Musk for $44 billion. Since the acquisition, Musk who is an ardent Twitter user has made quite a few remarks about what he intends to do with the platform, spawning a whirlwind of conversations and reactions from Indian netizens. YouGov’s latest data shows that close to two in five (37%) of Twitter users in India are happy about the platform’s acquisition by Elon Musk, with  urban Indian millennial users being most likely to say this ( at 43%). 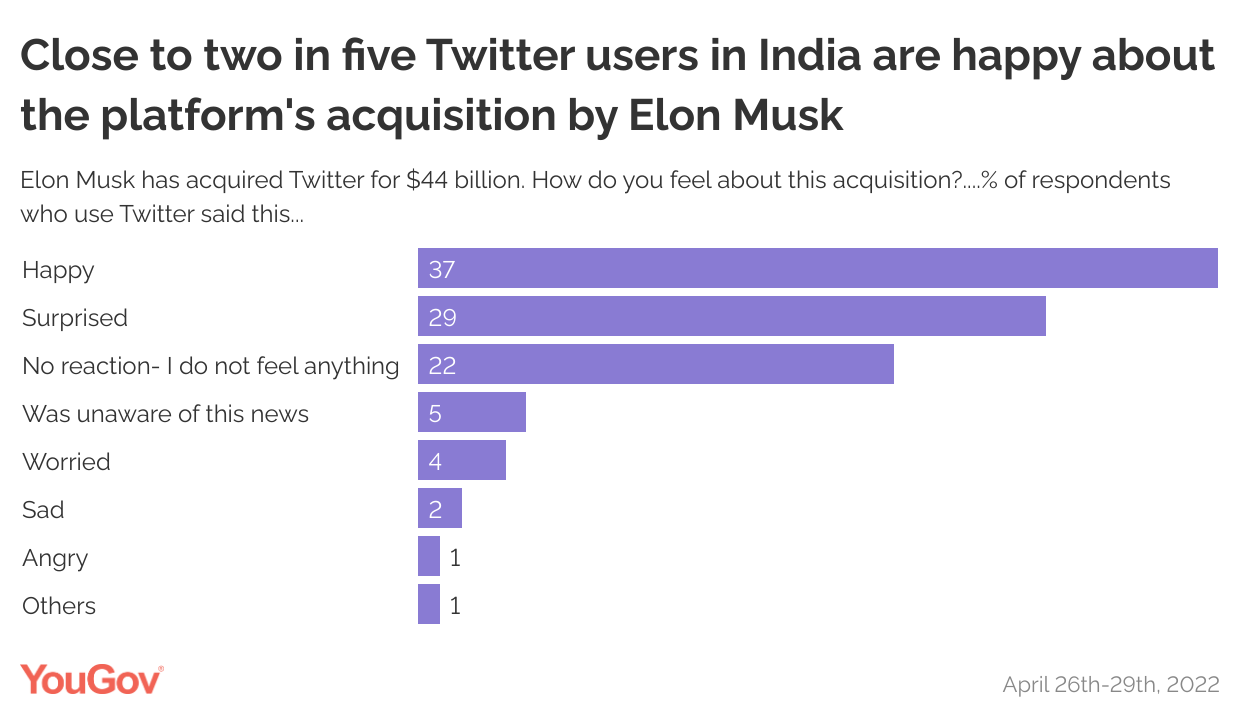 While three in ten of those who use Twitter in India (29%) are surprised by this move, a fifth (22%) remained unaffected by the news. The numbers for those who express negative emotions like worry, sadness and anger and those who are unaware of the acquisition, are much lower (8% and 5%, respectively). 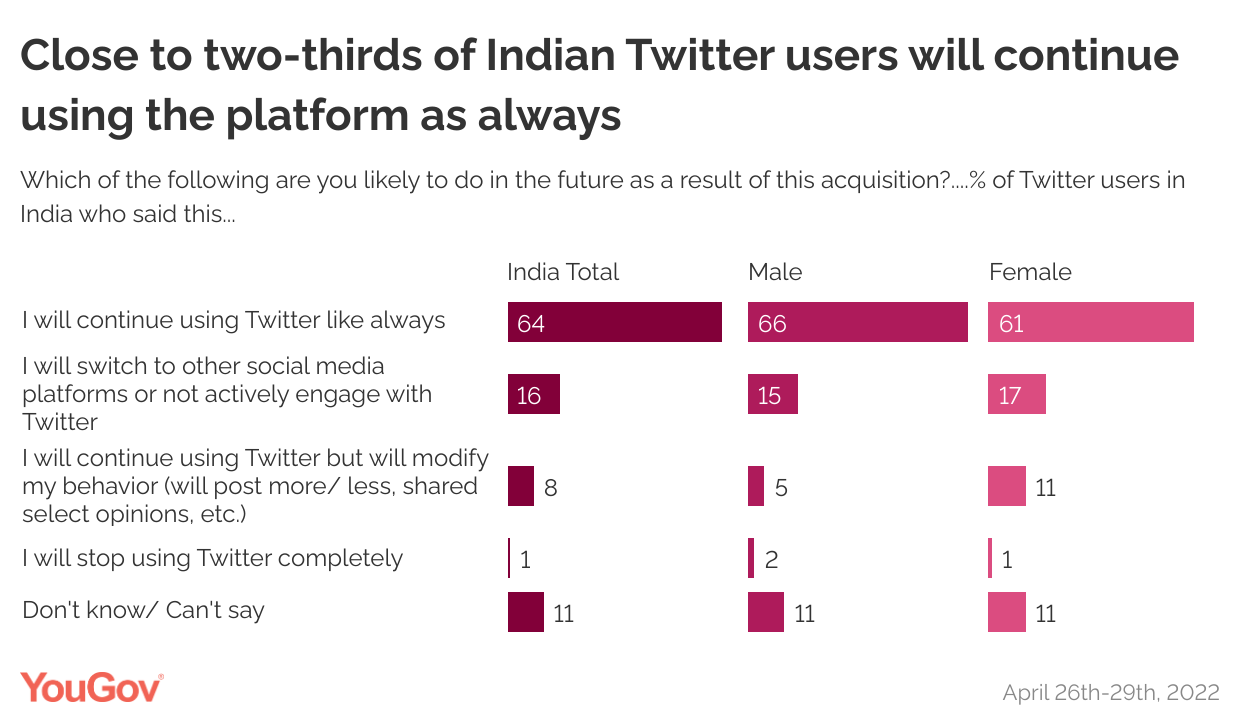 Talking about the anticipated user behaviour as a result of the change in leadership, close to two-thirds (64%) of those who currently use Twitter say they will continue using the platform as always.

Only a small proportion of Twitter users plan to make changes like modifying their behaviour on the platform (8%) or switching to other social media platforms (16%). While men are more likely than women to say they plan to stick to their regular usage (66% vs 61%), women are more inclined towards modifying their behaviour on the platform (11% women vs 5% men).

In India, the Twitter community is not just happy with Elon Musk acquiring the platform, they also believe in his leadership. Data shows that a majority (61%) of Twitter users in India agree with the statement- “Twitter will become the most powerful social media platform under Elon Musk’s leadership”. Again, we see that Millennial (70%) users are strong advocates of this view than Gen X (54%) and Gen Z (59%). This is surely a good news for the company as the global Twitter audience is mostly composed of users from this cohort.

Elon Musk (has more than 83 million followers on twitter), who himself is a free speech absolutist, has repeatedly said in the recent times, he wants to “transform” the platform by promoting more free speech and giving users more control. When Twitter members in India were asked how the potential removal of moderation would affect the future of the platform, almost half agreed this move may make the platform a place for healthy debates and free speech(49%). Half of this number (26%) think otherwise and believe this could encourage hate speech and misinformation. While 14% remained unsure, slightly over one in ten (11%) believe moderation may have no drastic impact on the platform. 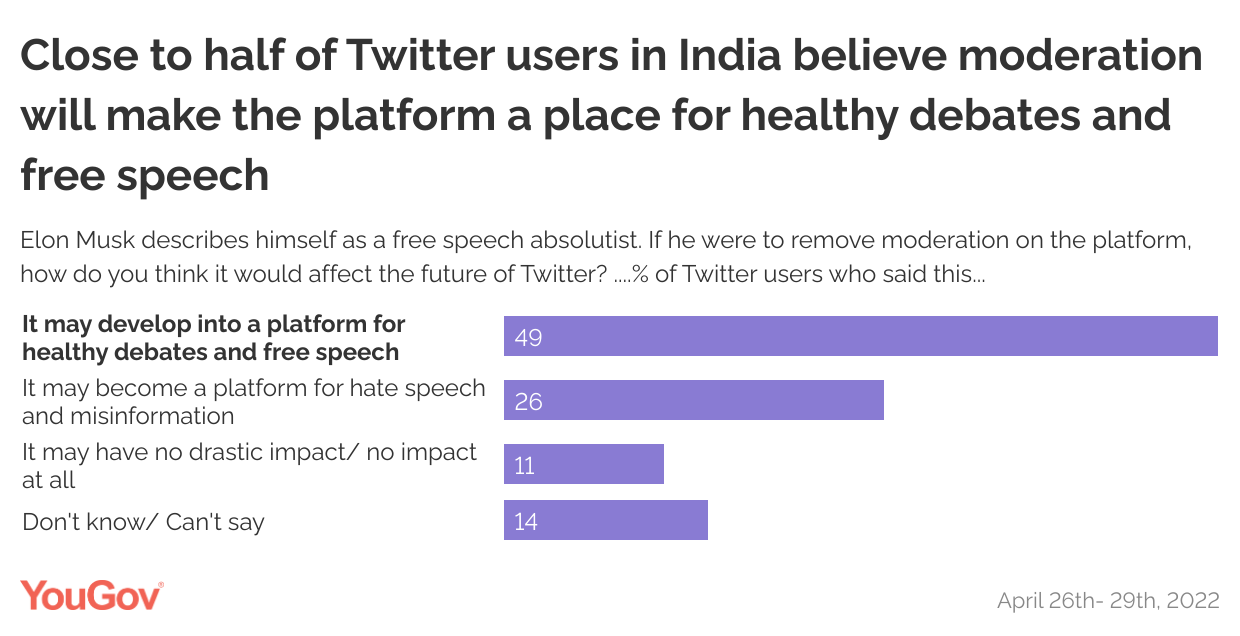