The recently concluded Tokyo Olympics 2020 saw India’s best rankings in over four decades and gave it its second gold medal. On the occasion of India’s 74th Independence Day, YouGov asked respondents which sportsperson according to them has made India proud at an international level.

Data from the survey conducted between 3 and 6 August among 1135 respondents reveals two-thirds of urban Indians (67%) think P.V.Sindhu has made the country proud at an international sports event. 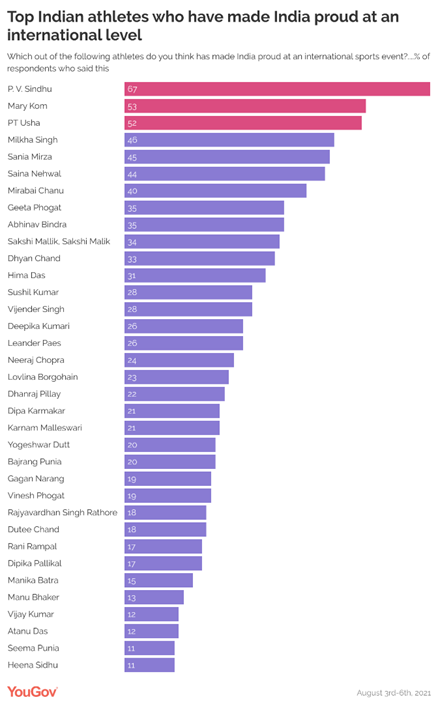 The ace badminton player became India’s first female double Olympic medallist after her recent success at the Tokyo Olympics 2020. Apart from this, Sindhu also has five World Championship medals to her name and is the recipient of some of the highest honourable awards like Padma Bhushan and Padma Shree.

Following P.V.Sindhu, more than half think six times world champion and boxing sensation- Mary Kom (53%) and the Queen of Indian track and field- PT Usha (52%) have made the country proud. Both of them are decorated Olympians who have won accolades for the country and became a source of inspiration to many. 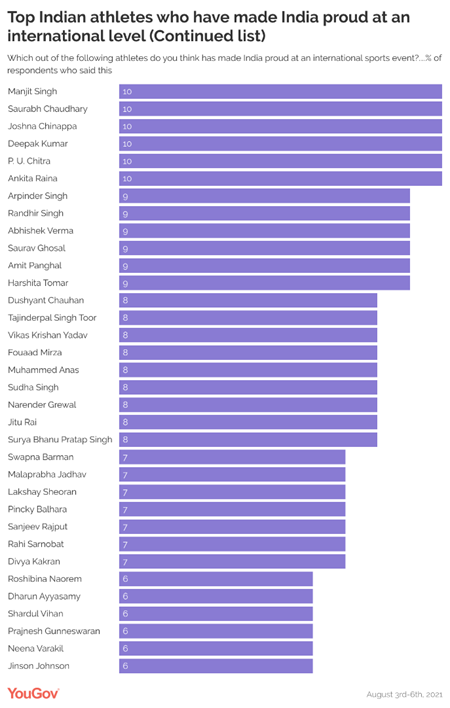 The recent Tokyo Olympics 2020 showed the strength of women power and it is not surprising to see these names in the list. Two in five urban Indians (40%) think this year’s Olympic winner Mirabai Chanu has made the country proud at an international event, whereas Karnam Malleswari- India’s first female weightlifting champion to win a medal at Olympics is considered inspiring by more than one in five (21%).

Shining bright among these female achievers is one of India’s best sportspersons- Milkha Singh. Popularly known as ‘The Flying Sikh’, the country’s highly revered sports legend is considered inspiring by nearly half of urban Indians (46%). The Padma Shri awardee has has made the country proud at various international sporting events, including the Olympics.

Talking about Olympics, the recent Tokyo Olympics 2020 participants and winners feature heavily in the list, including gold medallist Neeraj Chopra. Around a quarter of urban Indians (24%) think the star athlete has made the country proud. The results may have varied now (survey was done prior to his win) after his epic victory at the games. Nonetheless, he is considered inspiring by a notable proportion of urban Indians.

WATConsult celebrates its 15th Anniversary with the launch of NFT

Mumbai: Sony YAY!, in a bid to constantly serve kids with their favourite characters, even beyond Television, collaborates with Laviche...