We are targeting about 50 million paid subscribers over the next two years: Rishika Lulla Singh, Eros Digital in LEADERSPEAK

Eros Now has recently signed a couple strategic alliance deals across international markets in order to penetrate deep in those markets. The platform boasts of having over 1200 films and clearly films is one of their strong areas in terms of the content offering.

Not going the usual OTT route, which is an explosion of Original content, Eros Now has got the numbers internationally and has strong and promising plans for the Indian market. With a few original shows, the platform rides heavily on its film library. Keeping the viewers’ viewing experience at the heart of things, the bosses of Eros Digital have paved their path for the Indian as well as the international markets.

How has Eros Now been doing in India and what’s the progress report?

RISHIKA: Since the inception of Eros Now we’ve grown leap frogs, from our first 10,000 subscribers to now sitting at 18.8 million monthly paid subscribers as of June and a community of over 150 million. I think we’ve been very lucky in the sense that we have a very highly engaged and a loyal user base, which enables us to track all of our KPIs internally. So if you look at the average time spent on the platform, it’s about 75 minutes per session, which is actually a good 30% to 40% above the industry average of 40 minutes. The reason why we’re able to achieve those kinds of session times is because we’ve been very focused on the core of the platform, which is film and then tailing into originals. The fact that we have a premium film library, and a consistent set of premieres, we actually have rights to more than 12,000 films on Eros Now, that enables us to drive a high watch time, especially the fact that we look at people are spending 75 minutes on the platform, they’re also recurring about three times a week on an average. So we’ve managed to create a highly engaging proposition, and I am pleased with where the growth has come so far. We’re looking forward to growing the space a lot more aggressively over the future where we’re targeting about 50 million paid subscribers over the next two years. 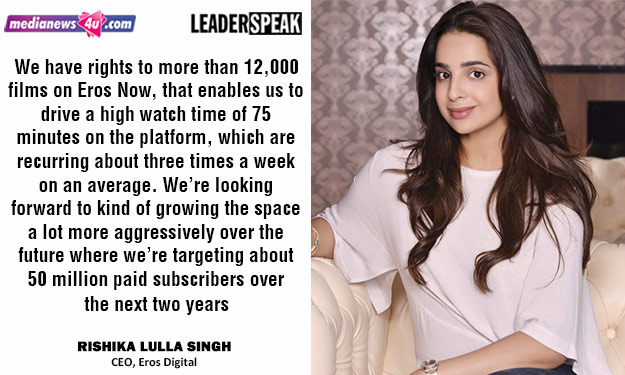 If you have to point out certain specific areas of growth for Eros Now in India, what would those be?

ALI: One of the areas of focus and a theme for us this year and also the next year is going to be technology. In fact, next week itself, we will be making one early announcement from the technology side and how we plan to cater a premium video experience.

From a growth perspective,we’re trying to focus on quality video users and their experience which will play a key role because we’re getting them to pay. I think one large pivot for focus would be technology. The second pivot of the focus from a distribution perspective is looking at how we’re able to do better penetration into Tier two, Tier III and Tier IV markets.

Some early initiatives that have happened in that space started in January when we announced a partnership with BSNL. Now BSNL is not the postpaid universe but the prepaid universe. It was the first time that an OTT pack was actually being bundled with a prepaid pack and being sold to the customer. Now Vodafone Idea doesn’t do this, Airtel too doesn’t function in this fashion.

There are two or three initiatives that we’re working on here from what we call is kind of penetrating the video ecosystem in the country or kind of building the ecosystem. I think the third one that is going to be a key focus area is what we call is hybrid.How do we build the offline-online consumer experience?

There are a few areas that we’re trying to see how we’re able to touch consumers at the offline touch points and try to convert them into the online video customer, like back in the day, people bought movie tickets offline. People used to even pre-buy the tickets at the box office. So it’s almost like, how do you cultivate that habit of saying that you’re able to touch the customer in their life cycle, and bring them back online. This is an addition to the stuff that we’re doing on our content strategy and on our distribution strategy. So that momentum continues, but if you were to say, I think these two or three would be the key focus areas of the brand this year. 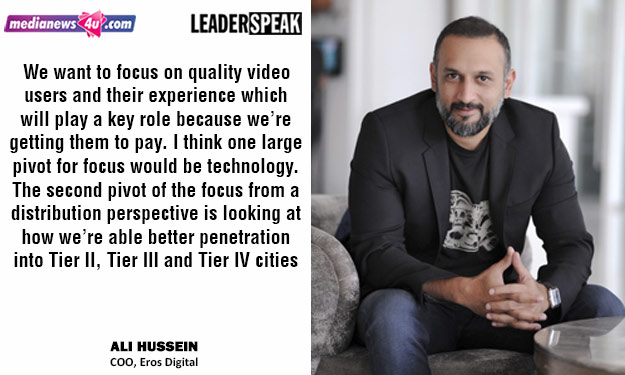 What’s the progress in the international markets across South Asia?

RISHIKA: We’re actually very excited about international. It’s something that we’ve been diligently working on quietly for the past year, and the results are just coming through now. So if we talk about WASU which was our latest deal we did in China, it gives us a universe of 125 million subscribers to tap into. It’s fantastic, because we actually become the premium Bollywood content provider for China. I think given also the recent political tensions you have between China and the US, India is poised actually quite beautifully to take advantage of that opportunity.

We’ve already had field runs to understand the success that is possible. We look at other films we’ve actually released which have consistently grossed around the $50 million mark. So you take Andhadun, or Bajrangi Bhaijaan, which we actually released two years later within that market. We’ve been taking slow and steady steps and right now we’re ready to go full throttle, to look at opening up these new markets.

Another market that we’ve been focused on, for example, is the Middle East, where we’ve just signed with Vodafone Qatar. And that again is going to be the first of many, with what you will be seeing within that region, I think it’s important for us to have that key and core distribution around the world to ensure maximum coverage, maximum ability to touch a large subscriber base, and then we know that our content and our brand should be able to actually do the rest of the legwork for us.

ALI:I think it’s from our legacy standpoint Eros has been very strong in international distribution. I don’t know if you remember earlier this year, Eros was the only non-US brand in Tim Cook’s keynote in March, and we’re launching with Apple Plus in a couple of months. So I think, whether it is the relationship we share with Apple or Google or Amazon. International continues to be a priority area from both revenue and a distribution point of view. The future and the next step is also create content which surpasses boundaries in terms of viewership with quality storytelling, so this distribution will come in good stead because this network will allow this content to kind of percolate further to users around the world. So identifying non South Asian audiences and identifying how you’re able to get into the fringes, and eventually build that subscriber of yours. RISHIKA: I think China takes a while to navigate and that is for sure. I think the Chinese market is very much similar to the way we are used to functioning here which is built on relationships. So it’s time to actually penetrate that relationship which may be at an executive business level, or it may be at a consumer level, and the consumer needs to gain that trust with your brand has to actually trust that you’re giving a good variation of content that also doesn’t offend cultural sensibilities. So we’re sitting in a place where we’ve already been building and investing over both of these relationships for a while.

For example, we look to a lot of our partners for guidance in terms of what content works and then there’s obviously the regulatory framework that you need to navigate in itself. I think for a new comer looking to navigate China, patience definitely the key. But all we can say is as China’s hungry and ready to consume. So if we look at even basic growth in the economy, if you look at brands and the way they’ve been growing, they’ve got a huge middle class that is ready to spend be it on entertainment or your basic kind of hard retail services. We just need to ensure that we are positioned in the correct manner for them to want to spend their dollars on us.

What exactly are you doing for the positioning of Eros Now?

RISHIKA: So that’s where we have our two deals already which is WASU and Aichi, and it there will be a few more in the pipeline, but you will hopefully see soon.

ALI: We have distributed two or three films in China like Andhadun and Bajrangi Bhaijaan. Our learnings from the theatrical collections about which provinces of China are doing well and why are the people of China watching the content. Our colleagues are also working on a couple of co-productions in China. So our investment in China will be on digital, as it’s going to be one of the primary areas. But it’s not just about saying that in creating a brand or a channel in China, it’s also the understanding of the Chinese audience, it’s about looking at how you’re able to build that audience. So it’s what we call the classic market development exercise. We are potentially the only players because we’re a producer, distributor, a studio and a digital platform. So we’re very well pleased to be amongst the only few players from India to actually do that at that scale. 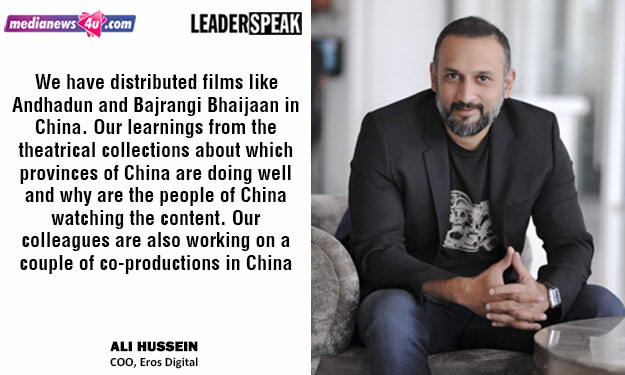