Women Inspiring Network brings five leading women in the Business of Filmmaking with their stories on how they made it in Bollywood. The first network of its kind that seeks to build an ecosystem for women to thrive and create, brings to you the Trailblazers of Bollywood, women who have been audacious in their dreams and fearless in achieving them.

As part of WIN’s Career Series, celebrated director Aarti Bagdi – an award-winning filmmaker will be in conversation with Rima Das – Filmmaker; Meghna Ghai Puri – President, Whistling Woods International; Revathy – Actress / Filmmaker and Rucha Pathak – Producer Excel Entertainment. WIN, through this series, hopes to unleash this power and energy among millions of women — because these stories prove that whatever the hardships, we can thrive, we can WIN!

Medianews4u spoke to Stuti Jalan, Founder, Women Inspiring Network on this initiative on the stories of so many women who inspire and motivate us to stay strong during hard times.

A great initiative by WIN, what was the idea behind doing such a workshop now during this crisis?

Women Inspiring Network is working towards powering up women with information and it took shape during lockdown in April 2020.  Women Inspiring Network is a content platform dedicated to helping aspiring women leaders fulfill their potential. Our aim is to build content and communities to inform and inspire. Millennials consume content on the go, they want content that keeps them informed and helps them grow. WIN will power women change-makers with information equipping them to succeed. 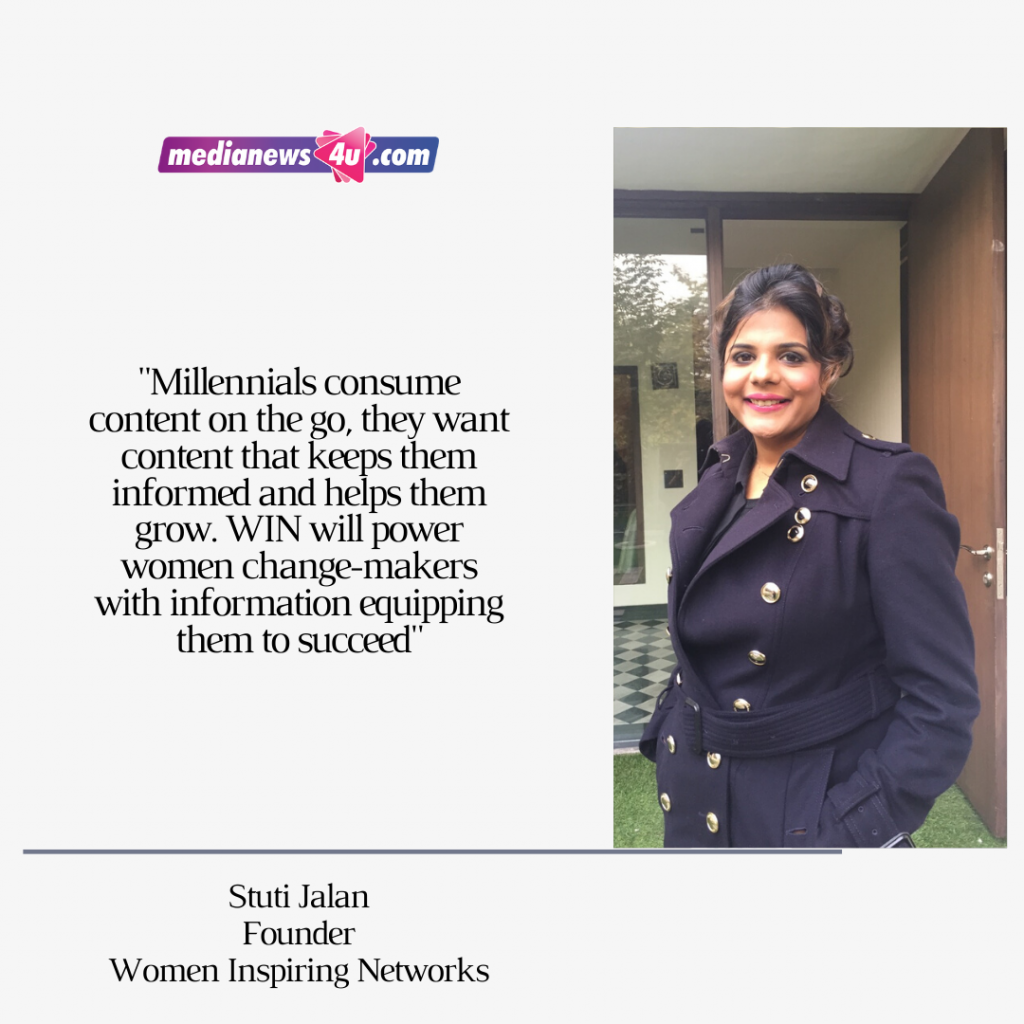 In May- the Women Inspiring Network initiated ‘Winning the Lockdown Series’ bringing together women entrepreneurs, homemakers, media personalities, social workers, influencers in their own field of work on how they are keeping positive during the lockdown. We garnered almost 100 videos in a span of 30 days and reached almost 70K+ people through the video series.

In June- We conceptualized the filmmaker series as we are during different career series. Women representation is not high in many sectors at the film industry we don’t much representation of women in the filmmaking business and our thought was to inspire several budding filmmakers.  We are doing different career series – filmmaking. Next in line is mental health, wellness and sustainability.

My question, why only Bollywood, there are real women in every field?

We are working on several series. We have Women in Business, Cancer survivor, mental health and collaborating up with educational institutes to reach our target audience which are young women who are aspiring change makers from across the country. We want to lay special emphasis from tier 2 and tier 3. For examples for ‘Winning the Lockdown Series’ we brought together women entrepreneurs, homemakers, media personalities, social workers, influencers, health experts, in their own field of work. 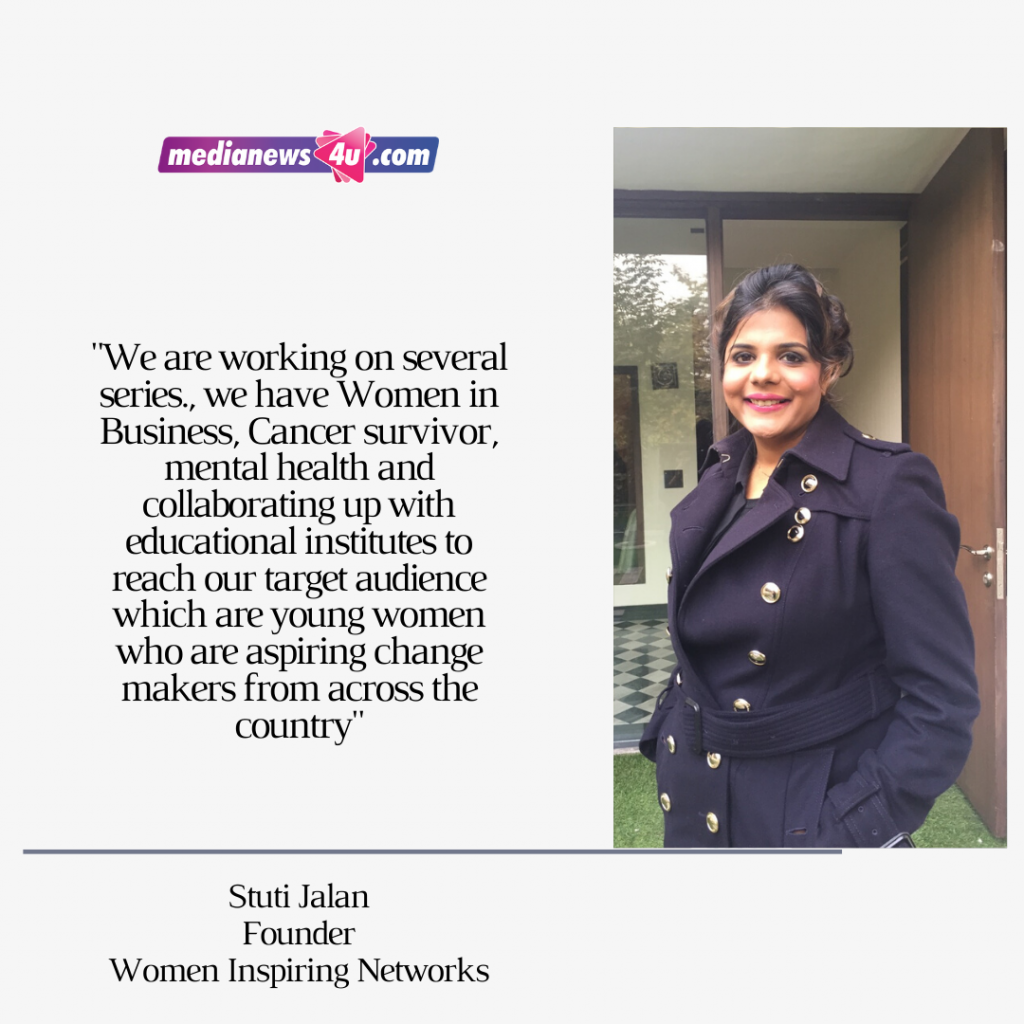 Also this series is Indian films and not just Bollywood – Revathy is south, Rima is Assam and international Cinema

Will these 5 Women Director’s also showcase real life stories of women who are not in the limelight that includes women in the technical fields in Bollywood?

Meghana Ghai is making filmmakers, editors, cinematographers, story tellers etc. Rima handles everything in her film Village Rockstars – camera, edit, directing, producing. Revathy is an actress and filmmaker, so apart from technique her stamp is all about soul. Rucha Pathak is a creative Producer of mainstream content, where she has to have an eye and ear for the best content and people who excel in their technique to come forward. Aarti Bagdi is a filmmaker where she relies on the technique of impactful storytelling and performances.

This will focus on a series of conversations with filmmakers who will share their journeys and takeaways to younger women/girls who want to step down the same path. Also redefining feminine. That it also means looking beyond gender.

Forging Filmmaker Dreams is a series of real candid conversations with women excelling in the technique of filmmaking. Each conversation will bring about a different perspective in film education, directing, producing and storytelling. This is first of many series we hope to do look at other areas in future series.

Aarti Bagdi quips on her association with Women Inspiring Network, “As a Brand Ambassador of WIN, Hosting, producing this series of Forging Filmmaker Dreams is about real inspiring candid conversations with some phenomenal women which is surely going to pave the way for many young girls daring to dream, for the women who want to emerge stronger when the going gets tough and for above all it’s for the storyteller, the filmmaker in you.”

Rima Das, furthering adds, “Mostly women are either idolized or objectified on screen. If we want to tell stories of real women, we need to have more women in films. We need to involve women from different regions, even from smaller towns and villages, from different backgrounds in creative as well as technical roles. It’s not that women lack the ambition or the drive, what they lack are the opportunities. We need to create a community where women support each other. I am glad that Women Inspiring Network is taking steps in that direction, and I am happy to be a part of this initiative.”

Meghna GhaiPuri shares her excitement, “I’m honored to be a part of the #FilmmakingSeries initiative by WIN. There is nothing more fulfilling than inspiring and empowering others through one’s life experiences and journey. Appreciate the efforts by WIN for hosting these series that empower women and boosts their self-esteem.”

“A film has to have a soul that is the only way it touches the audience that sees it”, as quoted by Revathy.

While Rucha Pathak adds to it, “I feel quite honoured to be invited to a conversation at WIN and I hope in our own little way we can inspire women out there to forge their own journeys as filmmakers.”

As a woman and leader what has driven you and make you stay positive during this crisis and lockdown?

Women leadership related for something which I never had the time earlier and especially after 2012 (when I went for leadership, mentorship programs in United States powered by Fortune MPW) and have been thinking of a platform like Women inspiring Network for few years now but it actually took shape during lockdown as I have been able to give it time and and I can see the impact the platform will bring.

We are bringing women together and the WIN network will grow and expand its influence and impact through different phases. In every adversity there is an opportunity and if we put our mind to it we can overcome it. Conceptualizing WIN has inspired and motivated me in many more than one. Speaking to speakers and listening to their thought process has given me many foods for thought and made me look at things differently and how we all need to reset ourselves. It will help us all to think differently positively and may inspire our audience and the impact will reach millions of Indian audience to relook at things and maybe how can we can all work differently.

Recently on our platform we had a request someone wanted to do a talk for responsible gaming in India and first lady poker in India. She has been bestowed with President’s Award for her contribution in the gaming sphere. The reason for the above example is I see more and more women going for unconventional professions. There has to be balance. I have been part of many women forums globally and on the advisory board like Dell Women Entrepreneur Network which has women leaders and entrepreneurs around the world and in discussions and many studies estimates that a higher participation of women in the workforce, raising the number of hours spent by them on the job, and including them in higher-productivity sectors will help spur such economic growth.

Sustainability, Digitalization, and life after COVID-19. We have already started working on some of the things listed above… As you can see listed above the action we have has in April, May, June & our coming series in July with educational institutes had motivated and inspired my young team. On personal front my almost 4-year-old daughter and her laughter and doing things together with her like crafts, dancing, story telling has kept me positive. 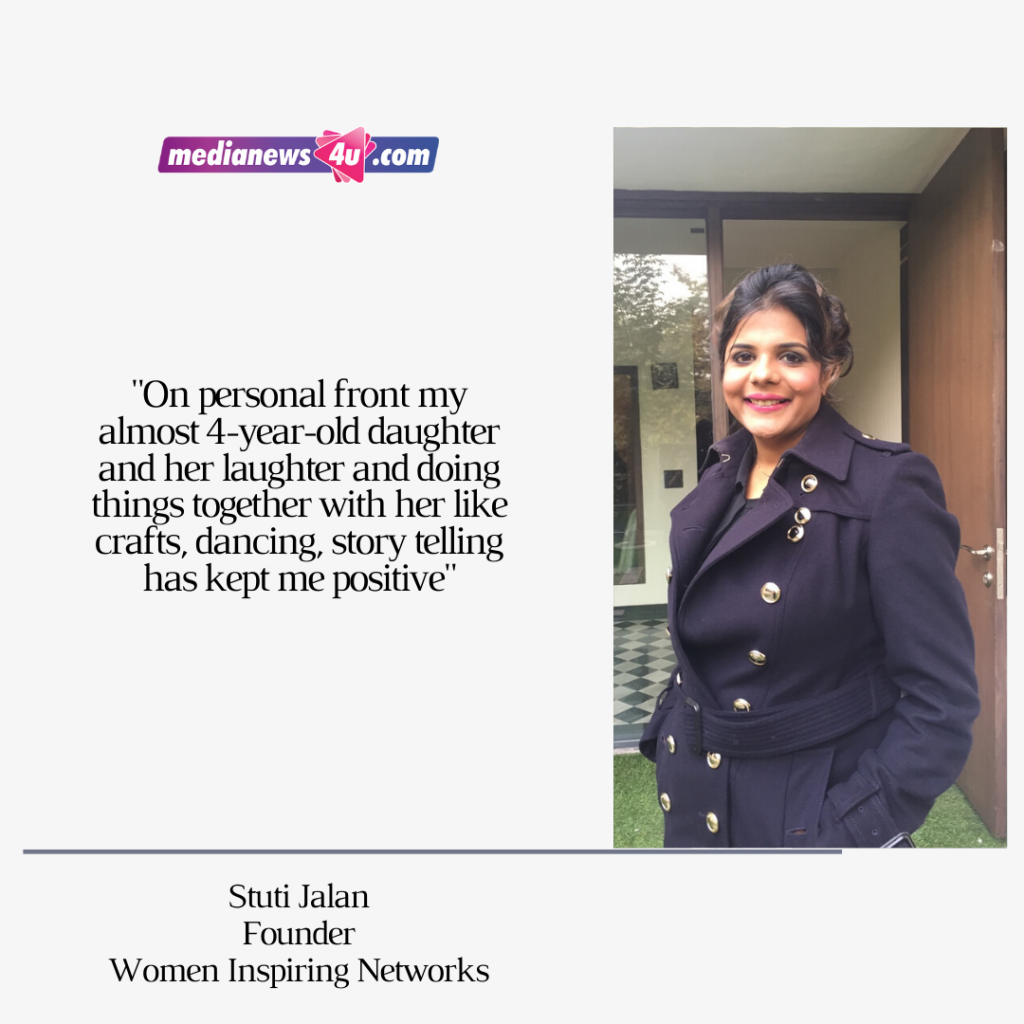 The Network now has 450+ members, how have you gone about reaching to women in villages or small towns?

We have already started Initiatives during lockdown and we would like to reach out to stakeholders from across board – organizations in developmental sector, NGOS, Govt, elected parliamentarians, corporates etc. We are also working sustainability series lessons from rural India to urban India. We are developing specific series targeted at women tier 2- tier 3.

How will these films be promoted as it would be imperative for every woman to watch it?

WIN is a digital first product across all digital platforms. Through digitally which we believe is the future. INOX Movies and Business World have already partnered Also brands who are partnering with us will also make content available on their platforms. Many institutes across the content country like IIT, Jai Hind, Annapurna etc. will be using our content. Through the above partnerships and collaborations, we will be reaching out different segments of women across India 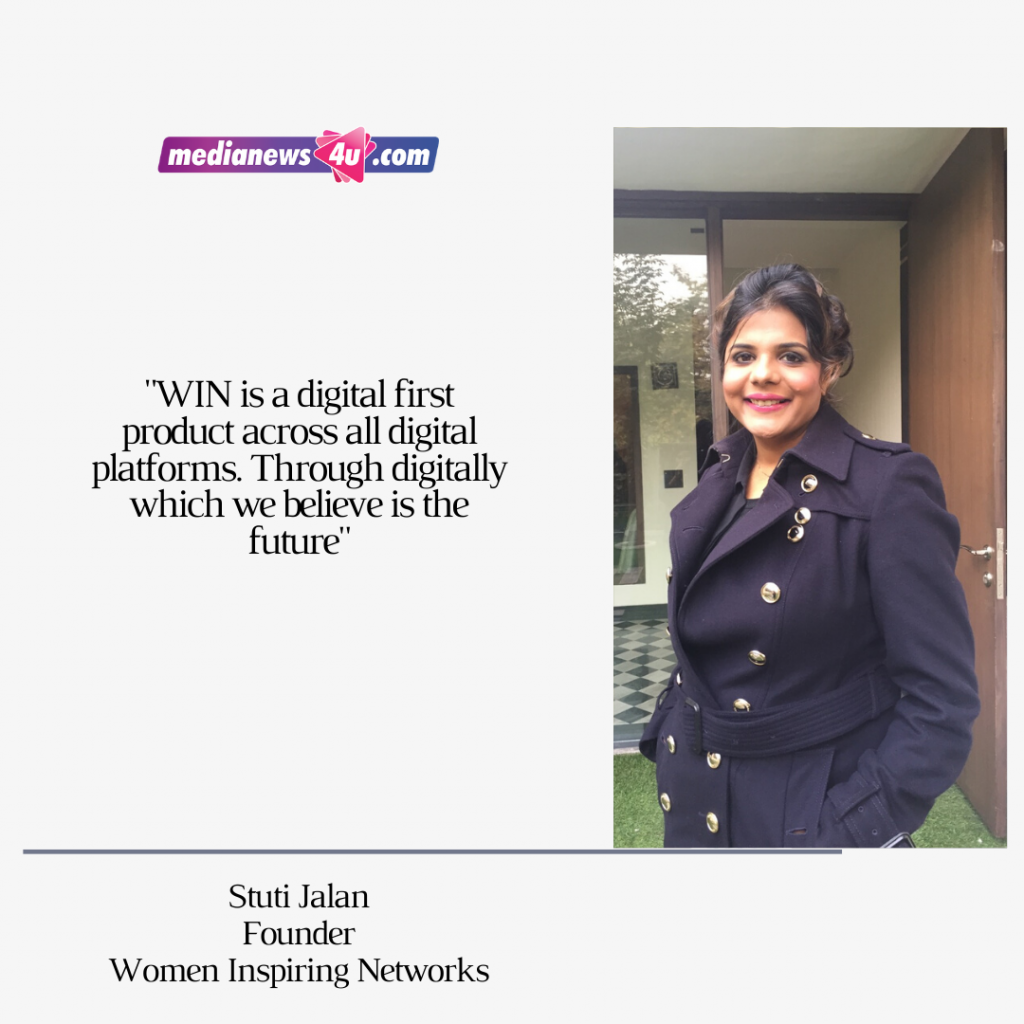 Bengaluru: Myntra has signed a licensing agreement with the ELLE brand, owned by the Lagardère Group (French conglomerate), to produce,...

We even refer to ourselves as Transformists which means we believe in the constant cycle of learning and evolution: Rajiv Dingra, RD&X Network

Our dedicated employees are the main reason for our successful and sustained growth: Pushp Raj Singh, JK Cement Ltd

Chennai: Star Vijay is set to launch season 2 of Cook With Comalion 14th November, 2020. The unique concept of...

TV9 Network forays into Bengal with the launch of TV9 Bangla