Axis My India, a consumer data intelligence company, released its latest findings of the India Consumer Sentiment Index (CSI), a monthly analysis of consumer perception on a wide range of issues. The September report highlights that 20 pc are planning to shop more this festive season. On media consumption 61 pc mentioned that they watch online video content either on their mobiles or connected TV. 32 pc mentioned that they notice advertising on TV, followed by digital (26 pc). On app usage, on an average there are 9 apps on the mobile phone of a smartphone user.

The September net CSI score, calculated by percentage increase minus percentage decrease in sentiment, is at +10, from +9 last month reflecting an increase/decrease by 1 point

Commenting on the CSI report, Pradeep Gupta, Chairman & MD, Axis My India, said “After compromising past two festive seasons to the pandemic and its related constraints, this year consumers are expected to shop more during festivities. One can witness slight increase in expenses across essential and discretionary products already. Further improvement in mobility sentiments highlights the fact that more and more people are enjoying the stores and malls experience of discovering, shopping and gifting. This sentiment is also extended among the Indian farmers, wherein a significant percentage of 15 pc intends to buy a brand new tractor in the next one year. This is thus a crucial time for the Indian advertising business as spend are expected to bring a lot more returns than usual. As more and more people (61 pc) are watching online video content (YouTube/OTT) on their mobile/home TV and thereby noticing ads across TV, online and social media platforms, it is of utmost importance for the media industry to tap the right medium for addressing differentiated consumer needs”. 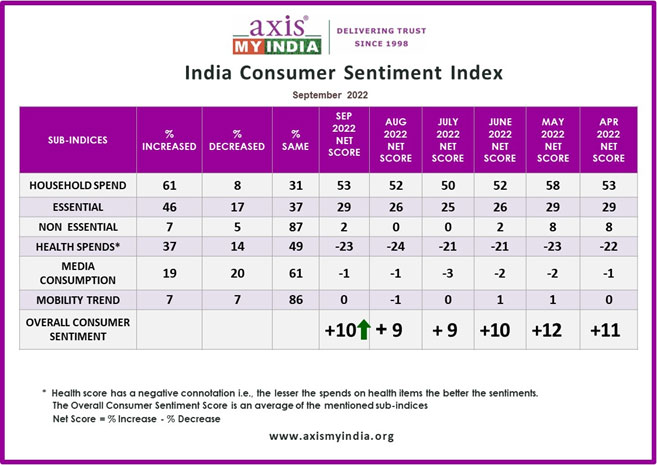