Union Minister of State for Finance Dr Bhagwat Kisanrao Karad in a written reply to a question in Rajya Sabha stated that there has been a paradigm shift in digital transactions in India.

The Minster stated that the paradigm shift is reflected in terms of the increase in the volume of digital transactions over the last three financial years as illustrated below: 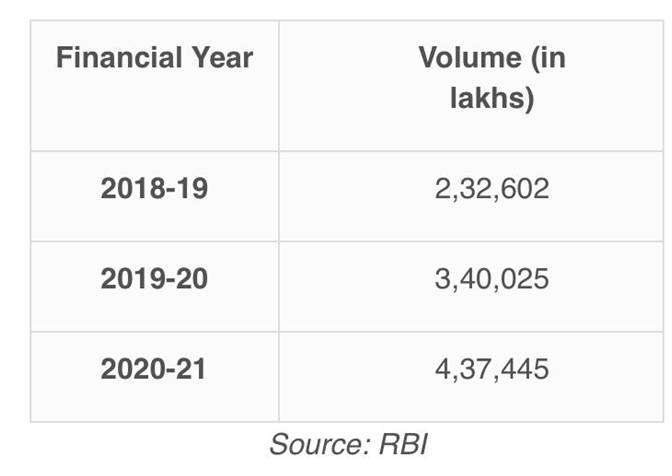 As observed from the above table, there has been a growth of 88% in volume of digital transactions during the last 3 years since 2018-19, the Minister stated.

The digital transaction platform is a pan India platform with a facility of ‘’anytime anywhere’’ banking. Accordingly, the data is captured only at the National level, the Minister added.

The Minister further stated that as per the data sourced from National Payments Corporation of India (NPCI), India’s own payment platform, UPI has emerged as the country’s favorite digital payment choice, with over 22 billion transactions registered during FY 2020-21, showing 4 times growth over the last 3 years. Also, AePS inter-bank transactions during FY 2020-21 registered a 9-fold growth, over the past 4 years.

To promote digital transactions in the country, the Minister stated that RuPay debit cards are issued to Jan-Dhan account holders under Pradhan Mantri Jan-Dhan Yojana (PMJDY). As on 08.12.2021, 31.17 crore RuPay debit cards have been issued to PMJDY account holders. As digital payment is one of the priorities of the Government to facilitate hassle-free and seamless banking transactions in the country, several other initiatives have been taken by Government of India through its various programs/agencies, Reserve Bank of India (RBI) and banks, to promote and create awareness about digital payments in rural areas.

While answering a question on preventing frauds in digital transactions, the Minister stated that the Unique Identification Authority of India (UIDAI) issues the Aadhaar numbers to the residents of the country and provides authentication services for establishing identity of the individual. UIDAI already provides for various modes of authentication namely biometric (which includes fingerprint, iris), One Time Pin-based (OTP) and demographic authentication. These can be used in a single factor or multifactor mode. Any user agency/ department can opt for one or a combination of these modes depending upon their security/ risk assessment of their respective systems, the Minister stated.

New Delhi: Evolve Digitas has won the digital and social media mandate for Shinon, which is a leading Medical Assistance & Healthcare Consulting...

Kochi: Zee Keralam is all set to launch its new sitcom series, 'Erivum Puliyum' from today. The series is curated...