American Express: Delighting you everytime with the Best Customer Experience

by Editorial
in Featured, My Column
5 min read

American Express started off as a courier express company in the year 1850 in Buffalo, NY. It was a joint merger of the express companies owned by Henry Wells, William Fargo, and John Warren Butterfield. Wells and Fargo would later split off and form their own company. Amex continued its express operations that got disrupted with the advent of railroads. The company moved forward to become synonymous with the high integrity of the Travellers Cheques. A Century ago, that meant honoring letters of credit so Americans stranded in Europe during World War One could fund their safe passage home. The revenue was mere US$ 3 million in 1950. Amex made entry much later than Diner’s club cart Blanche to encash the premium end of the credit card market bearing the words “MEMBERS SINCE”.

It has come a long way from that journey to date, Amex operates as a closed-loop network, which gives it a huge advantage over any credit card network. The advantages of a closed-loop network are many. First, there’s the simple fact that a closed-loop network stands to generate more revenue on every swipe. Theoretically, networks of this type should be able to pay more to drive transaction volume, whether that comes in the form of increased marketing spend or incentives like cash-back rewards, or both.

Amex’s merchant value proposition relies on the network’s ability to leverage its closed-loop infrastructure to deliver marketing and data analytics services to merchants that’s its competitors cannot match. By retaining end -to end control of all spending data on its network, American Express is able to sell its merchants information on and analysis of its cardholder’s spending behaviors allowing merchants to engage more effective targeted marketing or identify new locations for geographic expansion among other applications.

The credit card industry itself is undergoing a huge change apart from the traditional competition from VISA, MasterCard JCB & Diners Club, the industry itself faces huge challenges from payment banks, traditional banks ramping up its credit card services, the participation of Tech companies by way of Google Pay, WhatsApp Pay, Amazon Pay.

Amex has tied-up with People’s Bank of China to roll out its services in China in early 2020 which is dominated by WeChat, Alipay, China Union Pay. While technology is an enabler but it’s not the core thing any longer and Amex scores highly on various soft aspects which make the brand most sought after. AMERICAN EXPRESS prides itself on its vision is to provide the best customer experience every day.

A firm primarily derives competitive advantages only from given 3 sources as per Prof Greenwald and Kahn.

Amex is able to sustain its competitive advantage by expanding its leadership in the premium consumer space. Warren Buffett addressed a query during a Q&A at the BRK annual meeting (2019) relating to the durability of the franchise due to disruption.

“Ferrari is a brand in the luxury space and is holding a small share of the overall pie in the auto market globally. Similarly, Amex dominates the premium position in the consumer’s mind in the credit card despite several new players like J.P. Morgan Palladium Card. The Amex customer is not the one who is chasing deals with 5 credit cards for rewards. The company has a reasonably large constituency with good renewal and spends rate”.

The strategy to success for Amex is its refresh exercise and co-brand portfolio of cards globally. Amex has launched 50 proprietary products in its B2C & B2B segments in the last 2 years.

Delta is one such mega partnership that contributes to 8% of the overall card billed business and 22% of the Card Member loans and it has renewed the partnership for another 10 years. There are Green and Centurion cards and Marriot Bonvoy American Express @Cards & Platinum cards are geared up to cater to the millennials -50% of the new card owners are from this segment.

Ken Chenault who has replaced Bill Gates as a Board member at Berkshire Hathaway recently, joined Amex in 1981 and he was instrumental in turning around troubled merchandising operations from a revenue of US$ 100 Mn that was loss-making to a profitable 700 US$ Mn business. He guided the company through multiple crises before retiring in 2018 after spending 17 years at the helm. His leadership in his own words was like Napoleon focused around “Building People and Giving Hope”. He believed small business was BIG BUSINESS.

He stewarded an initiative “Small Business Saturday” for small businesses hit during the great recession a decade ago. Small Business Saturday in its 10th year hit US$ 20 BN which is much above Prime Day sales of US$ 7 BN. However, Alibaba’s “Doubles 11” (11/11/19) sales hit a whopping US$ 38 BN. (Source: Internet Retailer)

The spend-centric model offers differentiated value to Card Members, merchants, and business partners. The majority of the revenues are from the US and balance from International.

It’s an amazing business model (a double-dipper) which follows the natural law of sowing now and reaping benefits later. It starts with its marketing program and alliances to get the best partners and more merchants (investing US$ 7.1 bn), which gets traction of more paying customers and these card owners spend close to US$ 1.2 Trillion with the merchants. The merchants in return pay a variable fee (US$ 26.2bn) to Amex. Amex perpetuates a rewards program to delight customers with great service (US$ 14 Bn invested in people, processes, and services). On an average 160%, more benefit gets rewarded to the customer over the card fee to access a great lifestyle(Card fees received US$ 4 Bn and Member Rewards processed was pegged @ US$10.4 Bn).

The NPA’s on loans to both SME and cardholders are lower as it’s a premium segment. In return providing a stable return (US$ 3.5 Bn) for depositors. (Net Interest Income is 8.6 Bn and provisions was 3.6 Bn). (Annual Report 2019) 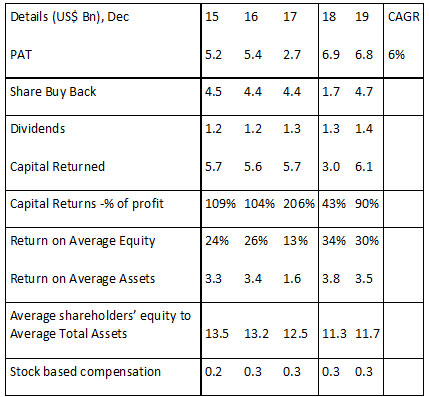 Amex redistributes almost all of its profit to its shareholders by way of stock repurchases as well as dividend distribution for the benefit of the old owners of the stock who would depend on it. Employees have a great R&R program apart from stock-based compensation.

Tom Murphy, a valued director of Berkshire and an all-time great among business managers, long ago gave Warren Buffet some important advice about acquisitions: “To achieve a reputation as a good manager, just be sure you buy good businesses.”

Warren Buffet owns the business & did “zero” activity over the last 29 years and like his partner Charlie Munger’s submission that’s how they became very rich. BRK’s ownership has moved from 10% to t 18.7% on account of share repurchases by Amex. It’s a multi-bagger for BRK. To add icing on the cake Amex distributed ~ 20% dividend on the initial cost of BRK’s purchase price last year. The time value of money for the dividend-paying years and overall dividends received by BRK is a bonus.

AMERICAN EXPRESS no doubt is a great business that delights all the stakeholders.

The speaker line-up for the SBC Digital India conference and exhibition is set to feature the founders of some of...