Improved connectivity, cheap hardware and data plans, a large pool of potential subscribers, and a string of national lockdowns have turbocharged the adoption of OTT services in India, states Comscores’s OTT in India: Full Stream Ahead report.

As per the report, Consumers do not hide their infatuation with the TV screen: roughly 57% of those who watch TV admit that they are addicted to TV. Yet the availability of TV content through the internet is changing consumer behaviors. When prompted, 60% of those who watch TV answered that online TV streaming services have changed the way that they watch television. In addition, 61% say that thanks to the availability of online TV streaming, they watch more TV than they used to.

But why do consumers switch to OTT content in the first place?

The answer to that question boils down to two words: convenience and content.In fact, convenience emerges in various forms, with definitions that overlap:

Taken together, the convenience of consuming content at a time and/or place that suits is the deciding factor for44% of respondents. This emphasis on convenience probably may well stem from the fact that only two-thirds of households (or 200 million households) possess a TV set, according to the Broadcast Audience Research CouncilIndia (BARC). With an average of 5 individuals per household, watching your favorite content can be a challenge. On the other hand, OTT content can easily be accessed through mobile devices, PCs, and laptops, which are cheaper and more widespread – approximately 470 million individuals accessed the internet either through a mobile or desktop device in July 2021; and almost 265 million of them accessed one of India’s OTT platforms either through a mobile or desktop device.

Another deciding factor is content, with 35% of respondents highlighting its importance in our survey: 14% find that better content is the most important reason; 11% think that a ‘wide content selection’ is the most important thing; for 6%, it is ‘new/fresh content’; and for 5% it is ‘content not available elsewhere. Based on the above statistics, it is tempting to conclude that quality trumps exclusivity. Yet with a marketplace that counts over 40 OTT providers and counting, the question is how to differentiate from competitors.

The key lies in OTT’s fragmented audience – in terms of content preferences, languages, cultures, and so on. Less than half of respondents (precisely 43%) favor content in Hindi, one of the official languages in India. Other vernaculars such as Tamil, Telugu, Bengali, or Marathi are the preferred language for 5%to 8% of respondents. 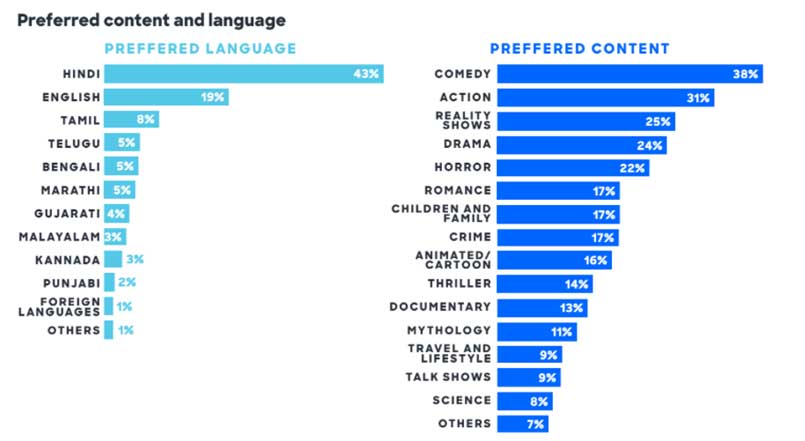 Despite the size of the market, the need for customized content could well increase costs while hindering economies of scale. Given the degree of competition within the market, pricing requires a delicate balancing act. On that front, there are encouraging signs: as the table below shows, the proportion of OTT consumers who spent least (i.e. up to INR 50 per month) decreased from 24% to 17%, while those who spend more than INR 201 increased from 41% to46% during the same period. Put simply, the pandemic has prompted customers to open their wallets and spend more on OTT content. Still, if market share is the name of the game, we expect OTT providers in India to experiment aggressively with monetization models to increase the average revenue per user and fund new content creation.

If pricing acts as a constraint on the supply side, technical issues also hamper the demand side. As the chart below shows, high data consumption and low internet speed are still flagged as the main pain points by consumers. While huge progress has been made in recent years – particularly in rural areas, much work remains to connect the remaining half-billion consumers.

Watching content through internet-connected devices is gradually encroaching into the time and space dedicated to traditional media. This is, in fact, a worldwide trend. But the size of the market in India puts India in a unique position to define the future of OTT: for international OTT providers, it is the market to conquer, and much resourcefulness will be needed to be successful; for domestic players who have carved a sizeable market share, it may well be the springboard for international expansion. All OTT service providers must address the challenges of acquiring a huge catalog of quality content, tailored to a myriad of languages and cultures. Moreover, they must ensure that said catalog can be delivered through digital networks of varying degrees of speed and reliability. But as the country keeps investing in its digital infrastructure and as the population grows richer, those who succeed may well find that they have transformed the entire industry in their wake.