TV Ad Volumes stabilized in Jun-Jul’20, week 26 observed highest Ad Volumes among weeks ranging from 23 to 28. Comparing week 28 to week 23, there was a growth of 31% in Television Ad Volumes.

Avg. Ad Volumes/Day for the months of Jun’20 and Jul’20 remained almost equal. 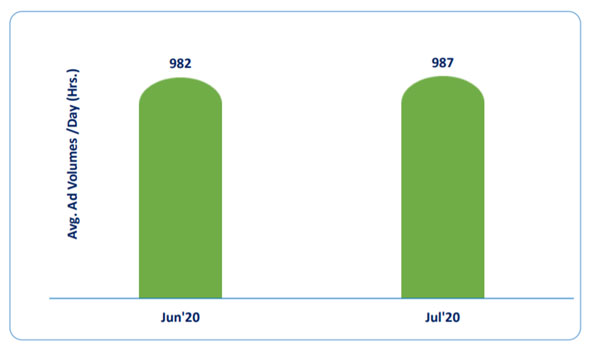 No of Categories, Advertisers and Brands

New* Advertisers and Brands each week

During week 23-28, the Top 10 advertisers together contributes 50% share of TV Ad Volumes. ‘HUL’ alone had more than 1/4th of the Ad Volume share followed by ‘Reckitt’ with 6% share and 680+ advertisers have consistently advertised during week 23-28 on Television. 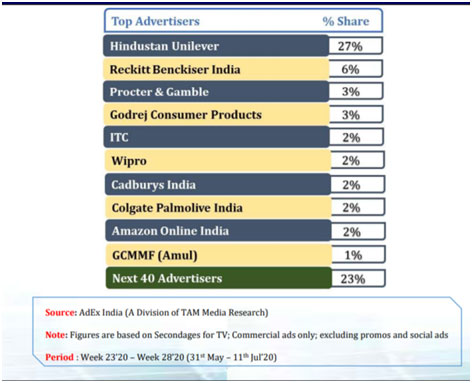 Exclusive Advertisers on TV compared to Print and Radio

Hindi News (National+Regional) had 33% share of Ad Volumes followed by Bengali News. 3 Southern language genres except Malayalam were among top 10 list of genres, Ad Volumes of Regional* and National News channels saw a growth with a minor drop in week 27.

Hindi Movies had a huge 47% share of Ad Volumes followed by Bhojpuri and Telugu with equal share, a continuous rise in Ad Volumes of Movie genre was noticed with a minor drop in week 27 and Ad Volumes of Hindi and Regional Movies were almost equal during week 24-26.