Irony Meter: 2022 – The year of mischief in advertising

There were some brands that used ‘mischief’ right but many abused the option taking the anything-for-attention route, contends the author.

by Karan Rajpal
in Advertising, Exclusive, Featured, Think Through
Reading Time: 4 mins read
A A

Year-enders are all around us, and while they focus on the best and the greatest the year had to offer, I have spent time brooding. About the state of Indian marketing, and a strange new affliction – mischief for the sake of it.

All through the year, in ways big and small, agencies and in-house marketing teams thought up new ways to deliver messages about their brands. And it didn’t always land right.

Even as I write the words that follow, I can sense these marketers’ reaction to this commentary, and other disparate pearl-clutching that has already occurred on social media on this: “any publicity is good publicity”. Maybe not.

From Puma’s signing up of Anushka Sharma through a threatened lawsuit that never was, to monster.com’s rebranding to FoundIt, executed via all of their employees writing goodbye posts on LinkedIn. From notifications sent by foodtech brands, taxi companies and other sundry businesses with misleading headlines, advertising in India has moved further from allegations of snake oil selling and bait and switch tactics.

We are now in the full-fledged misinform, mislead and mistreat customers territory. There’s a fine line between ingenuity, for long the super power for creative agencies, and a disingenuous, ‘bolne mein kya jaata hai’ era we are entering. And like many such vessels, there is no putting the genie back in the bottle. Vim Black for Men, FoundIt and a few other folks would win choice advertising awards for their campaigns, and marketers judging these awards and their agencies will decide such campaigns ‘work’. 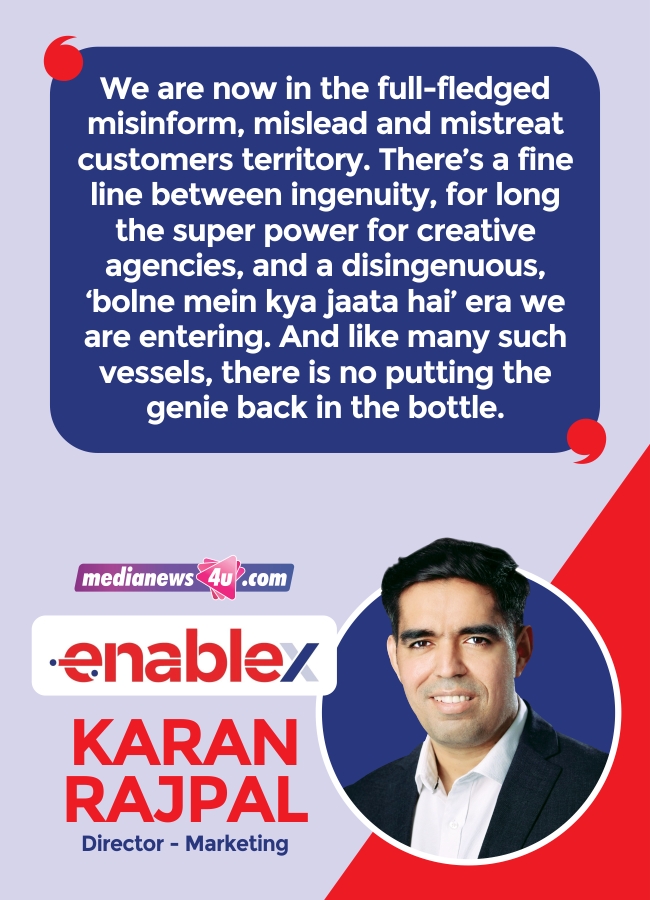 The deal is crystal clear: the agencies get a few trophies to put in their creds presentations, the marketing team has a few extra lines in their self-appraisal document, and the customer is out there, wondering what’s real and what’s not.

It is rich that all of this is coming after a decade of adland proclaiming brand authenticity is the new game in town. Everyone from a detergent to a furniture rental company to fizzy drinks said they will remain authentic to brand purpose, and their place in the customers’ lives.

Navel gazing aside, is there a way to do mischief right? Where you can get the customer to do what you want, even if it is a volte face to everything your brand has said in the past, or being cheeky in the right ways? I say yes, and many folks did it right:

Misinformation is a plague upon our society – and brand custodians claim brand safety is top priority. If so, why are they trying to bombard customers with information that simply isn’t true? For companies in the internet industry, one could perhaps stretch to think of a sense of desperation, to seem ‘with it’ for young customers’ sakes, and in line with their kamikaze business models.

But for anyone else, my advice would be what David Ogilvy said nearly 70 years ago: “The customer is not a moron. She’s your wife.”

(The author is Director-Marketing at EnableX, a Communications SaaS Company. He tweets at @ironymeter. Views expressed are personal.)