IRS 2019 Q3 throws up an interesting data across regions; English is the predominant language across States and sections of people. There has been increased awareness in reading and knowing English not only in the Urban HSM but also in the rural readers, while there is a slight dip in vernacular readership when compared to Quarter 2 figures. Magazine readership TR & AIR have remained constant across the last 3 Quarters. 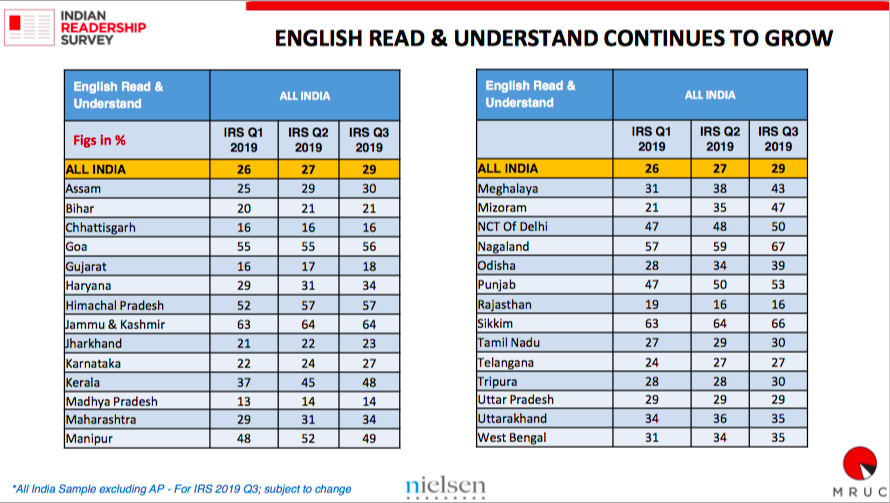 The surge in percentage figures of English Read & Understand from 26% in Q1 to 27% in Q2 to 29% in IRS 2019 Q3 is the testimony of the fact that English Dailies Readership is on a steady growth path. 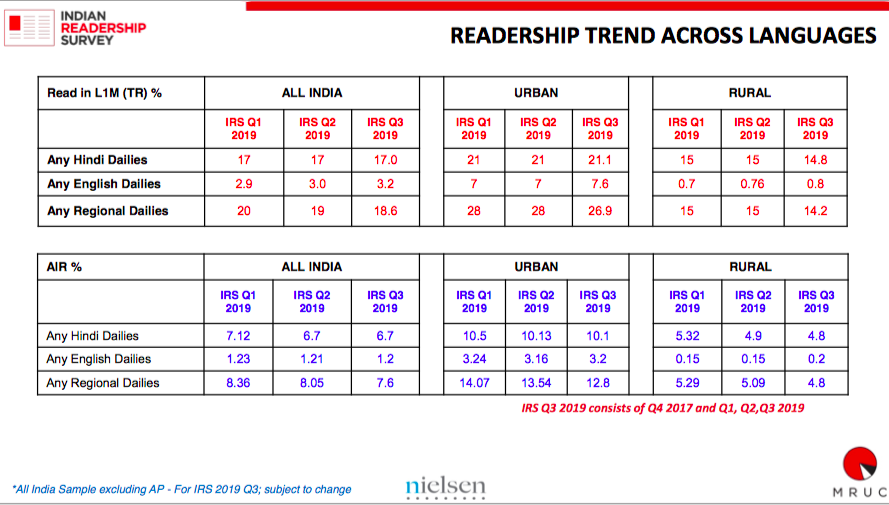 Though we are seeing rapid Digital growth traditional media continued to hold on to their loyal customers and NCC ABC sees a upward trend.

In Mumbai and Chennai, Times of India (TOI) continued its leadership staying ahead of HT and The Hindu respectively. In the North Dainik Jagran is the leader in UP, Bihar, Jharkhand and Dainik Bhaskar retained its position in MP, Rajasthan and Haryana. Hindustan.

Q3 data has excluded AP and this will be release by Mid-January 2020. This makes it imperative that no Comparative analysis at an all India level, will not be permissible. The J&K data was adversely affected because of political and administrative developments in the State (now union territory). The data has been compiled by consolidating J&K data of the last 4 quarters of IRS data i.e. Q3+Q4 2017 and Q1+Q2 2019 to the updated universe for the current round of IRS2019Q3.

ZEEsays #HumAndarCoronaBahar with a unique take on social distancing

Mumbai: India as a country has taken many steps to ensure the containment of coronavirus spread. Social distancing and staying...

ZEE has emerged as the biggest movie network in India, 200 bps ahead of its nearest competitor: Prathyusha Agarwal on spike in TV during Covid-19

Brands give their support to the #9Baje9Minute trend