While television and print retained their positions as the two largest segments, digital media overtook filmed entertainment in 2019 to become the third-largest segment of the M&E sector. Digital subscription revenues more than doubled from 2018 levels and digital advertising revenues grew to command 24% of total advertising spend. The sector continues to grow at a rate faster than the GDP, driven primarily by growth in subscription-based business models and India’s attractiveness as a content production and post-production destination.

The rapid proliferation of mobile access is enabling on-demand, anytime-anywhere content consumption nationwide. With a population of 1.3 billion, a teledensity approaching 89% of households, 688 million internet subscribers and nearly 400 million smartphone users, India’s telecom industry is poised to become the primary platform for content distribution and consumption. India ranks as one of the fastest-growing app markets globally, where entertainment apps are driving significant consumer engagement.

Online gaming retained its position as the fastest-growing segment on the back of transaction-based games mainly fantasy sports, increased in-app purchases and a 31% growth in the number of online gamers to reach around 365 million.

Uday Shankar, Senior Vice President, FICCI, said, “Riding the wave of exponential progress made towards digital accessibility and adoption, the M&E industry has been a forerunner of a dynamic and aspirational India. New products and business models are being imagined to capitalize on the rise in media consumption. Global players are recognizing the need to build India-centric offerings. The coming years are likely to usher in greater innovation in content formats, means of dissemination, and business models.”

Ashish Pherwani, Partner and Media & Entertainment Leader, EY India, stated, “The M&E sector witnessed a surge in content consumption as digital infrastructure, the quantum of content produced and per-capita income increased in 2019. Driven by the ability to create direct-to-customer relationships, the sector firmly pivoted towards a B2C operating model, changing the way it measured itself. As entertainment and information options grew and choice increased the era of consumer Acquisition, Retention and Transaction (ART) redefined the media value chain leading to the emergence of many new trends and strategies across content, distribution, consumption, and monetization.”

“The coronavirus outbreak will have a significant adverse impact on the sector, the situation is still evolving both in India and many parts of the world, the scale of the impact cannot be estimated immediately,” he added. 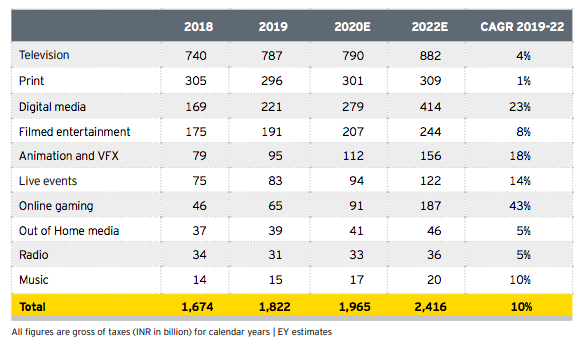 The TV industry grew from INR 740 billion to INR 788 billion in 2019, a growth of 6.5%. TV advertising grew 5% to INR 320 billion while subscription grew 7% to INR 468 billion. Regional channels benefited from the New Tariff Order as their consumption increased by over 20% in certain cases. General entertainment and movie channels led with 74% of viewership. On the back of several key announcements by the central and state governments such as Article 370, the Citizenship Amendment Act, and a general election, the news genre witnessed a growth to almost 9% of total viewership, up from 7.3% in 2018. In sports cricket emerged as the big winner in 2019 as it accounted for over 80% of the sports viewership, up from 70% last year, due to the ICC World Cup.

Key insights – Television will remain the largest earner of advertising revenues even in 2025, approaching INR570 billion. Viewership of regional language channels will continue to grow and reach 55% of total viewership in India as their content quality improves further. Content viewed on smart TV sets will begin to reflect that consumed on mobile phones, providing a window for user generated content companies and other non-broadcasters to serve content on the connected television screen.

Despite a 3% revenue degrowth at INR 296 billion, print continued to retain the second largest share of the Indian M&E sector. Circulation revenues increased by 2% to INR 90 billion as newspaper companies tactically increased prices in certain markets. Advertising revenues fell 5% to INR 206 billion in 2019 as AdEX volumes fell by 8%. Margins improved as newsprint cost measures were implemented and companies benefited from the reduction of newsprint prices.

In 2019, digital media grew 31% to reach INR 221 billion and is expected to grow at 23% CAGR to reach INR 414 billion by 2022. Digital advertising grew 24% to INR 192 billion driven by increased consumption of content on digital platforms and marketeers’ preference to measure performance. SME and long tail advertisers increased their spends on digital media as well. Pay digital subscribers crossed 10 million for the first time as sports and other premium content were put behind a paywall. Consequently, subscription revenue grew 106% to INR 29 billion. Digital consumption grew across platforms where video viewers increased by 16%, audio streamers by 33% and news consumers by 22%.

Key insights: By 2020, OTT subscription market will approximate 10% of the total TV subscription market (without, however, considering data charges). We estimate over 40 million connected TVs by 2025, which will provide a huge opportunity for content creators to reach family consumers. Better bandwidth will drive large screen consumption. By 2025, 750 million smart phone screens will also increase the demand for regional, UGC and short content, creating a short video ecosystem that can create significant employment. The battle for content discovery will intensity and move to the unified interface.

The Indian film segment grew 10% in 2019 to reach INR 191 billion driven by the growth in domestic theatrical revenues and both rates and volume of digital/ OTT rights sold. Domestic film revenues crossed INR 115 billion with Gross Box Office collections for Hindi films at INR 49.5 billion – the highest ever for Hindi theatricals. Overseas theatricals revenues fell 10% to INR 27 billion despite more films being released abroad primarily as films with superstars didn’t perform as well in 2019. 108 Hollywood films were released in 2019 as compared to 98 in 2018. The gross box office collections of Hollywood films in India (inclusive of all their Indian language dubbed versions) grew 33% to reach INR 16 billion. As single screens continued to reduce, the total screen count decreased by 74 to 9,527.

Key Insights: Digital rights continued to grow in 2019 with an increase in revenues from INR13.5 billion in 2018 to INR 19 billion in 2019. Digital release windows shortened with some movies releasing on OTT platforms even before their release on television. In-cinema advertising grew marginally to INR 7.7 billion in 2019 as multiplexes and advertising aggregators started signing long-term deals with brands. Seventeen hindi films entered the coveted INR 100 crore club in 2019, which is the highest ever. Interestingly, six movies made it to the INR 200 crore club in 2019, as opposed to three in 2018. The future will be driven by immersive content (technology and VFX rich) experiences to drive theatrical footfalls and some genres of films could migrate to home viewership only. We can expect to see creation of a segmented Hindi-mass product for the heartland at low ticket prices.

Mergers and Acquisitions in M&E

much lower at INR101 billion as compared to INR192 billion in the previous year. This was largely due to the absence of big-ticket deals with only four deals crossing the US$100 million threshold. The highest amount of investment was made in television, followed by digital, radio and gaming. Deal activity was spearheaded by new media such as digital and gaming, which witnessed 54 of the 64 deals in 2019, however, in terms of deal value, the share of traditional media segments such as TV, radio and film exhibition was 63%.