According to the report, DTH has attained average active subscriber base of around 54.36 million with out adding the subscribers of the DD Free Dish. This figures reflects a significant 25 percent drop in active subscriber base when compared to figures in January-March quarter that stood at from 72.44 million. This drop in subscribers based coincides with the implementation of New Tariff Order by TRAI that impacted the business aspects of Broadcasters and Distribution platforms to greater extent.

The one fourth drop in DTH subscribers in QE June exposes the fact that increase in channel tariff and introduction of NCF has hugely burdened the users that triggered an array of cord cutting practices among Indian DTH subscribers.

Contracting TRAI’s initiative to bring down the tariff, most consumers reported, on an average, about 25 per cent increase in their monthly bills for Cable TV and DTH. The subscribers were forced to look for smaller FTA channels due to which the viewership ratings of channels likeDangal TV witnessing chart bursting numbers while the biggies likes of Zee TV, Star Plus and Colors losing out despite much higher content quality standards.

The trend also shows that there is a clear shift happening towards on-demand content. The rise of OTT services Zee5, Hotstar and SonyLIV has noticeably impacted the subscriber numbers as these platforms allowed consumers to watch TV shows for free, in a move to pull more consumers towards their platforms, while the paid versions of these apps also were charging a fraction of the average bill consumers were paying for their DTH subscription.

Market share of pay DTH operators in terms of the percentage of average active subscriber base during the quarter ending 30th June 2019 shows that Tatasky emerging as the leader with 32 percent market share against 25 percent in QE March 2019. With the loss of 9 percent subscribers Dish TV dropped down to second place as the market share crashed from 40 percent to 31 percent. With just one percent increase from 22 to 23 percent Airtel Digital TV stood at No. 3 and Sun Direct at No. 4 with its market share increasing from 12 percent in QE March to 14 percent share in QE June 2019. 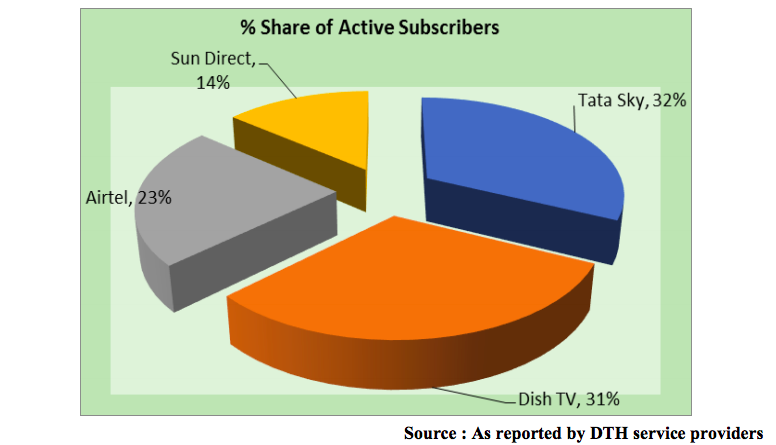 During the quarter ending 30th June, 2019, there were 4 pay DTH service providers in the country as compared to 5 pay DTH service providers reported in the previous quarter as the Ministry of Information and Broadcasting (MIB) has suspended the interim renewal of DTH license granted in the name of M/s Independent TV Limited as it had received numerous complaints from the consumers regarding total black out of DTH service. This also had contributed to erosion of DTH subscribers base.

It’s almost a decade into the industry for ITW Consulting!

Bangalore: Sports is an integral part of the society that brings people together. It allows them to have opinions and...