Our mission is to change lives: Parakala Prabhakar on Mahaa News

Parakala Prabhakar, a political commentator with a Doctorate from the London School of Economics popularly known for his show “Pratidhwani” on ETV2 is now taking lead to revamp the Telegu news channel Mahaa TV as Chairman from 30th November 2019.

Husband of Honourable Finance Minister Nirmala Sitharaman, Prabhakar has always been a political economist, and a major voice on economic and social affairs. He has also served as the Communications Advisor, and held a cabinet rank position in the Andhra Pradesh Government between July 2014 and June 2018. He was an important member of the Planning Commission of India, and helped formulate the 10th Five Year Plan for the country.

And now he enters the Media industry by revamping Mahaa TV.

MediaNews4u caught up with the multifacted leader for a brief conversation on this new and exciting innings of his life.

Your journey from a political economist to a government adviser and now to leading Mahaa news channel and thus entering into the Media industry now… what made you take this route?

I feel that it is a continuity of my journey. I was active in the constituency politics.

And after that I concentrated on doing a current affairs program. From there I went on to become a government advisor. I’m a vertical economist. I run market research and a brand consultancy firm. I’ve been familiar with the media space; analysing and looking at the political, economic and social phenomena, commenting on them, analysing them making sense of what’s happening around in our state, in the country and in the word.

I feel that the television medium is now at a very critical juncture in the sense that increasingly digital devices are now the medium of consumption of news. 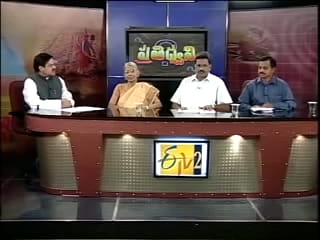 It’s quick, it ought to be short, and it is mobile. People are not consuming news and commentary sitting at home in front of a TV; so there is a need to revamp the entire thing, make it mobile friendly, and distil the news and commentary into a readable format in a short time.

I feel that in my new role, I can lead the way atleast in Telugu media, in Telugu television, to make us much more importantly, commentary, more accessible. That is the reason why I’m coming into Television media. 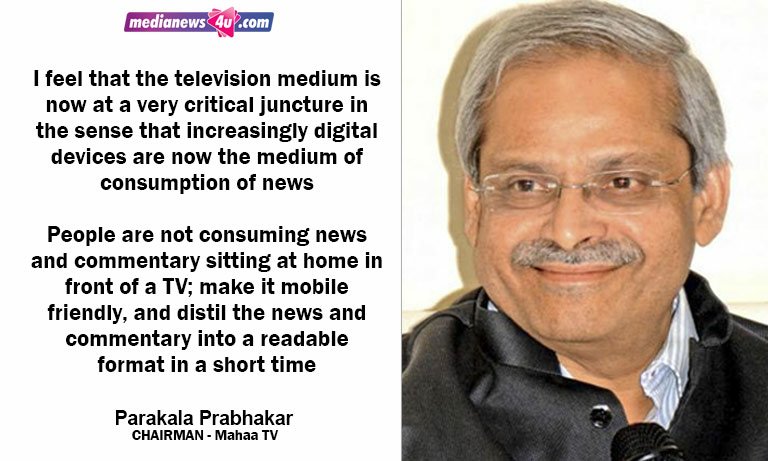 It is proven time and again in all your endeavours that you have been successful in whatever you decide to do… what mechanism you have in place to revamp Mahaa News channel to achieve greater heights?

The first thing that I would concentrate is that I will make it a much more professional organization. What I observed in most of the TV reporters is their skill sets need to be updated. The most obvious area is piece to camera (P2C) the reporter from the site of an incident will have to be very confident and articulate to capture the essence of what exactly has happened. That is missing. I think they are capable, but a little bit of training is necessary for them. 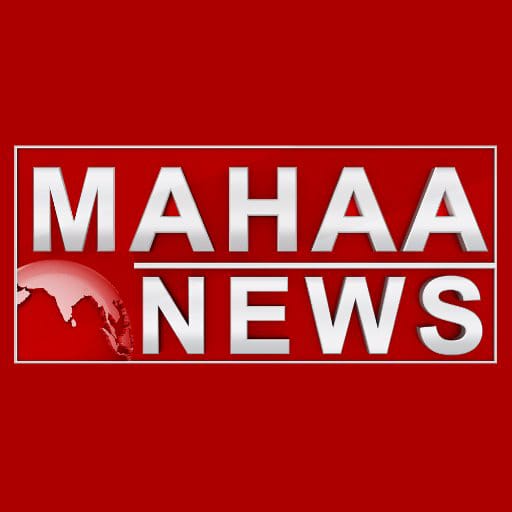 Second, I want this perception that news means politics needs to be changed. News is not necessarily politics, not necessarily from the political party offices or their press conferences. Education is news. Culture is news. Market is news. Economy is news. Ordinary lives are news. I want a lot of non-party political events and happenings to also find a place in the news.

And I also want women’s issues to be highlighted both working women as well as the homemakers. They need to be featured much more than what is now available on the television sets and in the delivery states.

You have been a trendsetter with your popular show Pratidhwani. With Mahaa TV would you want to restart Pratidhwani?

I would not be able to say now, but what I definitely can say at this stage is that the discussions that we had in that program called Pratidhwani were very informed discussions. They were not shouting matches between two individuals or between parties, etc. They were

party representatives, experts and domain specialists who came but you see at the end of the program, the viewer used to have something very solid to take away. To a large extent in most of the channels today that is missing. So taking my experience of conducting Pratidhwani, I would like to bring that element back into the discussions in Mahaa TV.

There is a huge traffic of News channels in Telegu, almost 22 of them. Your thoughts on the competition…

There are definitely a lot of players in the Telegu news channels. But you see my news is going to be very special in the sense that as I told you that it is going to be 70% non-political news and 30% political news. That is one unique selling proposition of Mahaa news. 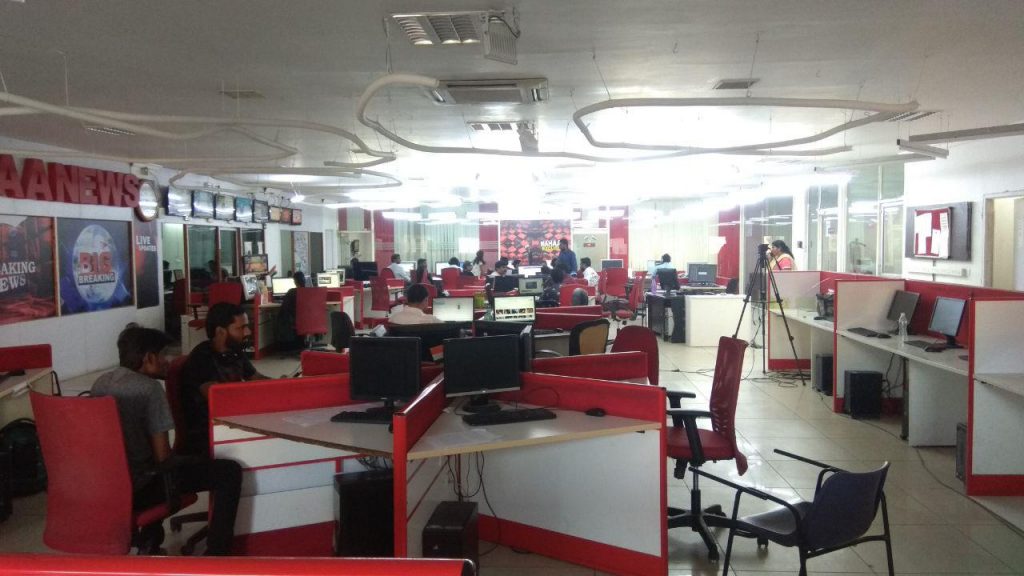 We believe that we will be able to grab the attention of the viewers with this USP. The second thing is the way the news is presented, the screen is redesigned and the content that is going to be redesigned. These are going to endear Mahaa News to the viewers.

And say in the afternoon at three o’clock. If most people are going for some kind of a program on the GEC say for instance women, look at watch a TV serial or something or a health program or a beauty program or whatever. Now, my effort is going to see that they come to Mahaa TV, so that our programs are going to be competing with in. In those slots with the GC For instance, if at eight o’clock primetime news, my effort is going to see that 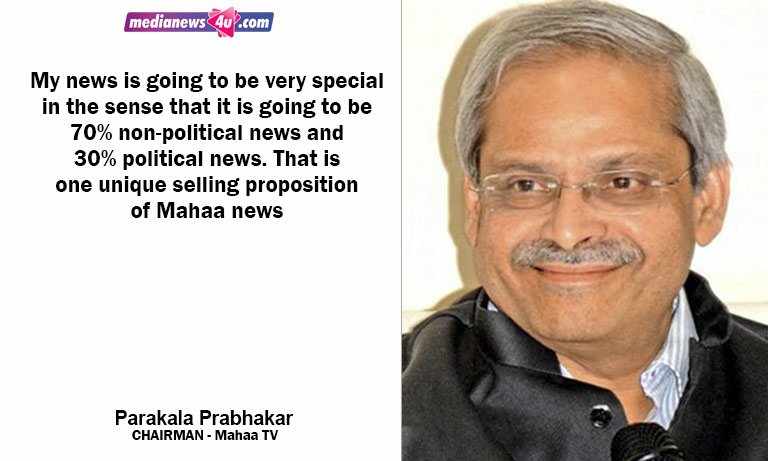 What according to you takes to create a niche to grab the eyeballs of the esteemed audience?

TV is a visual media. It has to be visually rich. Otherwise one can listen to radio or read the newspaper. But if we have to compete with the newspaper and our radio it has to be visually rich. The visual needs to be meaningful. The visual needs to connect to the viewer. That is one thing which we are going to constantly therefore, if we do that the viewer is going to come to us and take away more value than the other platforms that are available to them. In that sense, we are confident that we can make it a success.

What will be your approach to the news on Mahaa TV? How will you create a niche for the channel?

As I told you already that this is going to have only 30% party political news and 70% non-political news. Our mission is to change lives.

Why do we want to know what is happening around us? In our district or in our state, or in our country? It is to use that information, process, analyse and interpret that information so that our lives can be made better.

People used to say, information is power. Today there is huge amount of information; you don’t need Mahaa to come and give you information.

What Mahaa does therefore is, to give you can interpretation, analysis, intelligent comments and also tell you what is behind the news. How does news impact you as an individual? How does it impact us as a community, a constituency, a profession, a society and finally as a country? Now, Information is not power, but analysis is power. Interpretation is power, comment is power. So, that is the niche that we are going to come into and that is the gap that we are going to fill.

How do you foresee the social economic development in two Telegu speaking states? From the lens of Mahaa news, Will Mahaa news be the big instrumental apparatus to address this issue?

Of course, as I told you that Mahaa news’ mission is to change lives.

How do we do that? We will look at Telegu states we look at the country and we look at the world but of course our main focus is going to be the Telegu states because ours is a Telegu channel but we look at all problems, we go where problems are. We interpret them, report them and take the opinions of people. 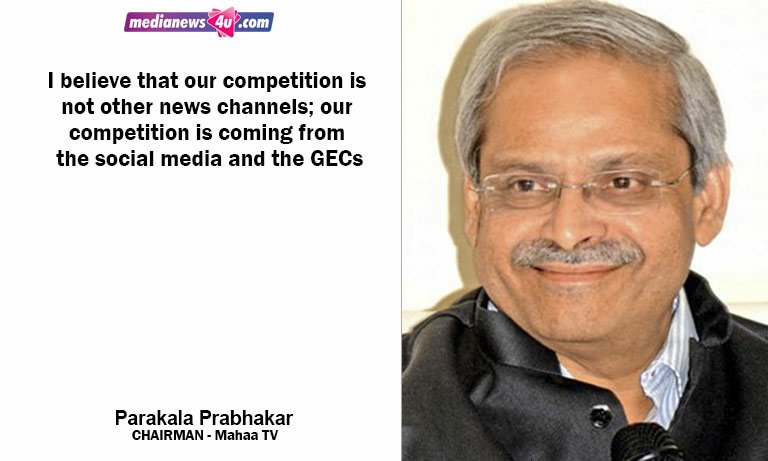 Mahaa News is not going to be one way traffic off; it’s going to be a two way communication. It is a genuine interactive platform that I would like to make the channel.

In some places, of course, they are forced to respond if you know the public sentiment is very high.

New Delhi: Barbeque Nation, the pinnacle of buffet outlets in India has decided to expand its PR mandate with Crossword...

Bangalore: Life is great, cheese makes it better! This adage sums up the universal love of cheese. Cheese is that...

We are optimistic that next year will be as good as any other year: Ramesh Ramanathan, Sterling Holiday Resorts

A Digital Media strategist Tanushree Radhakrishnan has spent 15+ years in this industry. She has been instrumental in driving the...