Pandemic or no, India’s Entertainment Appetite remains full with ‘Virtual – tainment’ in 2020

Mumbai: With the year 2020 finally coming to an end (atleast on the calendar), BookMyShow, India’s leading entertainment destination takes entertainment enthusiasts on a throwback journey. A year that started on a high note for entertainment lovers, with several highlights in the first quarter, soon transformed completely – the manner in which people consumed entertainment – moving from the big to the small screen, from out-of-home to in-home, curated experiences across cinema, theatricals and live events including sports, comedy, music concerts and more, in the wake of the pandemic outbreak and the subsequent lockdown.

With entertainment undergoing a massive directional change this year, BookMyShow was not only quick to recognise this shift but also change tack and launch a slew of virtual live offerings as soon as the lockdown came into force starting with ‘Live From HQ’, ‘Rambo Circus’ digital edition – Life Is A Circus’, ‘Theatre Live – The Stage Comes Home’, ‘#LiveInYourLivingRoom’, #StayFitIndiaChallenge and more across music, theatre, stand-up comedy and other performing art acts to keep India entertained. Specially curated domestic experiences in virtual entertainment notwithstanding, BookMyShow lined up some of the best of international artists and marquee experiences delivered straight to the safety of our homes including DuaLipa’s Studio 2054, Triller Presents: Mike Tyson vs Roy Jones Jr., Sunburn Home Festival, Tomorrowland Around The World – Digital Edition and newer artists such as Taylor Castro, Willie Gomez, The Buckleys and many more – many of which were available on the platform’s specially launched streaming platform for live entertainment BookMyShow Online.

Commenting on the year that was, Ashish Hemrajani, Founder & CEO, BookMyShow said, “For over 20 years, BookMyShow has been fulfilling the needs of millions of people to step out and enjoy movies and live entertainment. Ever since Covid affected our lives the way we knew it, we have been adjusting to the changing times. Over this past year, BookMyShow has innovated with at-home, technology-led virtual entertainment. We wish to thank our long-term partners and collaborators along with whom we strived to bring great international and homegrown events with close to 6,400 digital events for our consumers. With over 80% of our events being ticketed today, it is evident that there is a growing demand for exclusive, curated and premium live virtual events. While a complete return to out-of-home entertainment will probably take a few more months, we foresee the future of entertainment to remain strong as people love to socialise and get out. However, we think there is an opportunity for a hybrid model where both, out-of-home and a live experience on-ground may co-exist and BookMyShow will try and bring the best of both, to our consumers in India and across the world.”

It’s safe to say we have more than enough to #ShowOffTheYear2020* .

#ShowOffTheYear2020 – THE BEST OF CINEMA

2020 started off on a historic note for movies in India, with some of the biggest milestones for the Indian film industry as also BookMyShow were achieved in the first quarter of the year, before the pandemic rendered the cinema business shut. Cine goers got a chance to watch some great content before theatres were shut down across languages such as Tanhaji: The Unsung Warrior (Hindi), Ala Vaikunthapurramuloo (Telegu), SarileruNeekevvaru(Telegu), Darbar (Tamil) that topped the charts and rang the cash registers loud and clear, as favourites amongst fans all across.

The Best of the Big Screen: 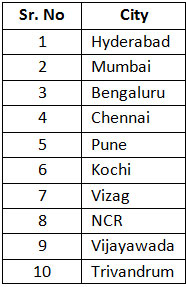 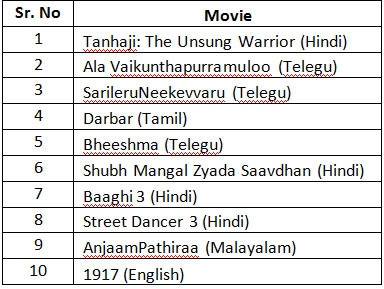 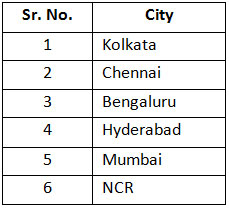 #ShowOffTheYear2020: THE BEST OF IN-HOME VIRTUAL ENTERTAINMENT (Beyond Movies)

Swiftly adapting to the change that the winds of 2020 enforced for out-of-home live entertainment, BookMyShow brought some of the biggest and most marquee domestic & international experiences straight to the homes of millions of consumers and provided them a safe experience right on their small screens with a host of virtual offerings. Multiple genres, formats, offerings were explored and introduced while enabling a seamless technology system that also saw the launch of India’s first ever streaming platform for live entertainment – BookMyShow Online. From music, theatre, sport, live performances, workshops, masterclasses, comedy, fitness, online games and much more, BookMyShow had something for every consumer across India.

The Best of VirtualEntertainment – Key Highlights of 2020

Top Performers Across Genres: (by ticket sales on BMS)