by Editorial
in Featured, Television
Reading Time: 1 min read
A A

As per BARC data for WK 47, News18’s Kishore Ajwani continues to dominate the viewership numbers at Prime Time with Sudhir Chaudhary’s show strengthening its position at no. 3, while Rajat Sharma’s show remains at no.2.

Sudhir Chaudhary’s show Black and White on Aajtak was hovering at number four and five for a long time. He has stabilised his position at number three, after more than 30 weeks of launch.

India TV’s Rajat Sharma continues to rule at number two. His show has been one of the most popular prime time news shows for more than a decade.

In terms of overall viewership also, News18 India is topping the charts with 15.7 pc, followed by India TV which has garnered 14 pc. Aajtak has got 13.2 pc market share. 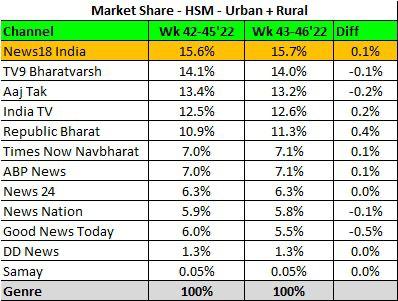