R.Bharat achieves leadership with its Reach and Prominence in a year of its launch: Vikas Khanchandani

Republic Bharat was launched on 2nd February 2019, in a cluttered Hindi news space and has completed a successful one year. Arnab has always believed that even in the news genre, content is very important and as long as the channel is ahead of the news, the channel will always be ahead of the existing Hindi news channels. From the day of the launch, the channel dream of capturing unduplicated and unique Reach of 322 MN views has taken place. 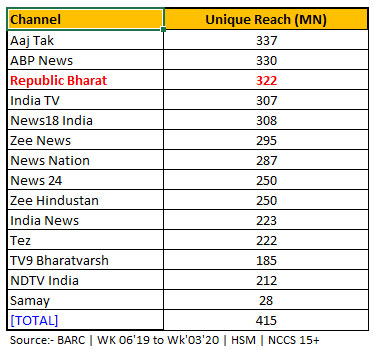 In an exclusive chat with MediaNews4U, Vikas Khanchandani, CEO – Republic TV, talks about the Launch, the Channels vision and strategy in the cluttered Hindi news landscape and a channel dedicated to the Nation.

At the launch, the channel wanted to create a clear position for itself as a brand, which brought new style of hard–hitting news, deep investigation, impact-driven and people-focused journalism to the Hindi speaking audience in India. The tag line ‘Rashtra Ka Naam’ resonates very well across the Hindi speaking states of the country.  It positioned itself with the rising preference for the country i.e India and Bharat, because when you say Bharat today, it signifies the heart and soul of India among the people who speak not only English, but all the other Indian languages.

The channel launched with a bang by doing a hard-hitting expose about a prominent politician and has continued to fight for real causes and real issues of the common man across the country. This channel has been created by journalists, who are on a mission to advance the cause of the country/nation above anything else. Consequently, every news item goes through the filter of nation-building and national protection.

At the launch of the channel Arnab Goswami, said ‘I have entered Hindi news to remove the teleprompter and I request all the 9 pm anchors as a token to their seriousness in news to stop using their teleprompter in their 9 O’clock news. I throw this as a challenge. If they do not know how to do news by heart, they need to tell their audiences that they cannot do the news via a teleprompter. One line goes off the teleprompter, and they will stumble and stop. They don’t do debates because they do not do their research. I do not want to name anyone, but these are facts. There should be a massive campaign against Teleprompters in Hindi news. I don’t use a teleprompter for two hours in my news. And in Hindi, too, I will not use a teleprompter. If I can do it in Hindi without a teleprompter, then I think the others can do it as well.’ The channels 7 pm show ‘Puchta Hai Bharat’ anchored by Arnab speaking in impeccable Hindi is a hard-hitting debate, it has captured eyeballs and garnered a loyal audience.

When talking about the strategy of the channel Vikas said, “our strategy was to get very experienced faces and journalists in the Hindi news genre to get 100% real news to the consumers in this genre as for over two decades now, Hindi news channels have done everything except news. All kinds of doomsday predictions, superstitions, entertainment shows, all this has come under the genre ‘NEWS’. R Bharat decided to change that perception and they have achieved it in a short span of one year. The numbers speak for themselves. The channel also beliefs in Breaking stories from ground Zero this provides accurate news coverage by not overly relying on News Agency reports but makes sure to be present when the news happens”.

Echoing the positioning of the channel and staying true to it, Vikas said, “Our aim was not to get into ‘we deliver Speed or keeps you ahead kind of tag lines’ as we all know that in today’s connected world all channels get the news at the same time, it depends on how the news is broken and consumed. The channel has always believed in its strong brand and content positioning with “Rashtra Ke Naam”. The viewer wants a proposition that has a higher purpose and the entire nation is aligned to the concept of “for the nation.” It really worked for us very well and when the Pulwama attack happened we were just 6 months old and the entire country sampled the brand R Bharat as Pulwama news event became the largest news event in the history of News television. The channel was in the second position with a reach of 138MN and stayed true to its positioning of the nation first.” 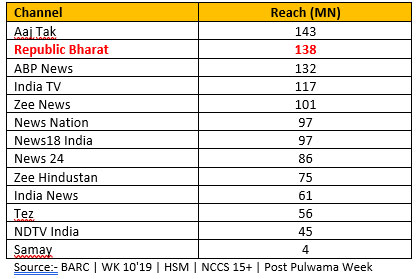 On R Bharat’s uniqueness among Hindi news genre, Vikas added, “we wanted to be seen as a pure news channel in this genre, we had also experimented with our afternoon band 12 noon – 4 pm by airing the usual entertainment or astrology as for nearly two decades Hindi News channels in that particular time band have been peddling TV serial gossip, there is a dedicated audience for this kind of shows, but on days when news got prominence over this content the channel saw a rise in viewership. We decided to drop this content altogether and concentrated on hard News throughout the day. BARC data shows that R.Bharat is the number 1 channel during the afternoons as most viewers wanting hard news don’t want entertainment shows in this genre and for them, R.Bharat became the only destination for news. The audience that wants pure news is the affluent, focused and decision–makers. The channel has moved to a massive 15.3% share with its 100% News Strategy in the day part.” 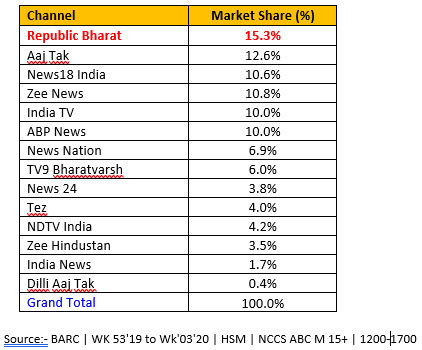 Vikas concluded saying, “The aim and vision with which R.Bharat was launched a year ago we have stayed true to that, today we get an exclusive audience on the platform as the brand has created a unique appeal to its viewers. The stories have been hard-hitting, talked about the relevant issues, no diversions has made the channel unique. In one year since its launch, R.Bharat has carved its niche on delivering 100% unadulterated news and also the channel is available across the length and breadth of the country across distribution platforms”. 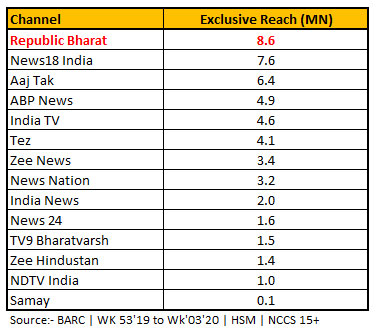 New Delhi: Browntape.com, a leading e-commerce aggregator in India, has raised a fresh round of funding, from PE fund Marathon-Edge-backed...

Mumbai: Manzar Studios has bagged the exclusive Indian remake rights of Argentine-Spanish hit 'At the End of the Tunnel’ directed...