Ram Siya Ke Luv Kush will strengthen our primetime and to give us a fantastic funnel: Nina Elavia Jaipuria, Viacom18

Ramayan is the first mythological story all of us have seen on television multiple times. It’s a story that never gets too old for the viewers to watch and for storytellers and content creators to create but this show Ramayan is the story that happened after Lord Ram and Sita returned to Ayodhya from Lanka. And Viacom18’s Hindi GEC COLORS is all set to launch its new fiction mythological show, Ram Siyake Luv Kush from 5th August, 2019 airing on the weekday primetime slot of 8:30 PM from Mondays to Fridays.

While one agrees that mythological shows are a huge investment and extremely risky because the audience already knows the story, the scale of production which includes the detailing involved in set design, costumes and style of storytelling is what truly drives viewership and in turn the business for a broadcaster.

Medinews4u caught up with Nina Elavia Jaipuria, Head, Hindi Mass Entertainment & Kids TV Network, Viacom18 to understand what went behind the show and a lot more.

How has the Mythological genre been doing for Colors? And what made you decide to do a mythological show?

I think it’s done wonderfully well and we have partnered with Swastik only in the past. Whether it’s been with Shani or Mahakali, I think it has been very well received by our audiences, and that actually encouraged us to do one more mythology show for a couple of reasons.

First is of course, the fact that while they were relevant then, they’re even relevant in today’s times. I think it’s pretty much about taking our culture to the audiences who have not been aware of Ramayana as much in today’s day and age. It’s going to be a good refresher course for a lot of audiences.

The other thing, it does beautifully is that it’s a universal unifier. It’s a show meant for families, it cuts across all age groups, it’s a show that everybody is going to be sitting in the living room and watching all over again.

The last thing that when we decided to do a mythological show but a little differently and that’s where we decided to do Uttar Ramayan. So normally the story would end when Ram and Sita come back to Ayodhya after the death of Ravan but what we did is that we decided to take it to the Uttar Ramayan stage where you have Luv Kush and we will narrate the Ramayan from their perspective, and how they were instrumental in uniting their parents. So to me it is a Ramayan and an Uttar Ramayana which has never been done before, in a way, and it’s a very different perspective of bringing Ramayan to the audiences. 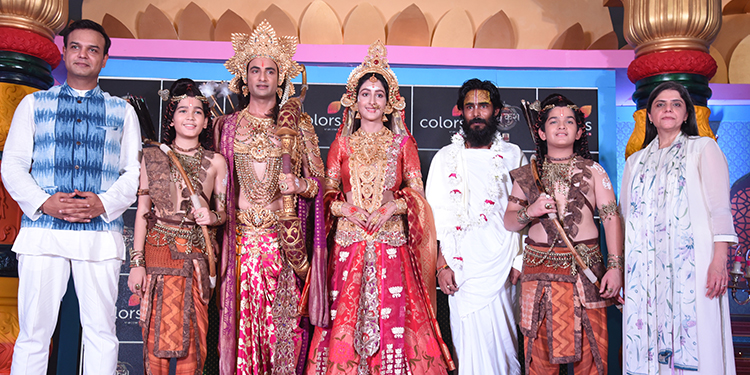 So for these three reasons, I think we were very convinced that this is a show that’s going to work for us.

As always I think we’ve been bold, we’ve been different, we’ve always experimented and we’ve taken risks. I think this is a big risk, from the perspective of saying we’re going to offer variety to our audiences. From doing fantasy drama to vicariously living through Big Boss we are now bringing mythology. So the amount of variety that we offer to our audiences, and we’re very true to that promise, is why we decided to do a mythological show of this kind.

How does the viewership of a mythological of this kind differ from a Tier One Metro city to a Tier two or Tier three city or a small town?

I see the entire cow belt to be responding to the show very well. Whether it’s UP, MP, parts of Punjab, Haryana, all of those and Delhi included, I would think to some extent, are areas where we believe that the show is going to really kick off in a fantastic way because this is where Ram was born. The whole HSM belt to my mind is going to really take this show to a very different level in terms of its viewership.

The fact that it’s coming after a long time there’s been a hiatus of mythology for a while. So there hasn’t been a mythological show in a while and every time we have brought mythology, it’s been very different there was neither a Shani done before nor was a Mahakali. And now there’s never been an Uttar Ramayan that’s been done before. So to me, it’s also about being very differentiated and unique in our offering. But coming back to your point, I think the whole cow belt is going to be very embracing of the show.

From a Tier perspective, I think it would cut across, because even in metros today you have the lower tier population and audiences. So to me, while it cut across age groups, I think it cuts across geography as well, to be very honest. I think all the geographies are really going to be very embracing of the show.

Which are the brands that have partnered with the show?

As of now, we have India Gate Basmati Rice which has joined us and of course as the show picks up we will have a lot of people are wanting to be a part of the inventory, which is very precious in today’s day and age.

How many genres does Colors weekday prime time boast off? Mythology, Drama, Comedy, and in the weekend, you have fiction, nonfiction…?

Yes as you rightly mentioned we have Mythology, Drama, Comedy, Fantasy drama, and adventure with Khatro Ke Khiladi. And of course now we have a game show which is fun and comedy and drama put together which is Khatra Khatra Khatra actually our variety has spanned a lot more genres than ever before. We’ve also got now in the mix, very cultural nuances as well.

So if you look at Choti Sardarniit’s very clearly a Punjab oriented saradar family. If you look at Bahu Begumit’s depicting a completely different community. If you look at Bepanha Pyaar it’s a suspense thriller. If you look at Ghatbandhan is based in Bombay and so we have actually gotten even nuanced into in our non-fiction drama shows, we’ve got different flavours and each of them, are being pillars in terms of love, sacrifice, revenge and all of that.

We are actually expanding our width in terms of the genres that we are offering. And now with mytho joining the bandwagon, I think we’ll just kind of top the cake with the cherry.

So what do you expect Ram Siya ke Luv Kush to love us to do for Colors?

I think Colors is looking forward to a very fertile primetime slot and that’s why we have given it the 8:30 PM slot so that it’s right in the middle of the primetime, so to speak. We believe that mythology will work best there because families will break their original and habits and come to watch a magnum opus, an epic story, and a story that is now going to be told very differently through the eyes of Luv Kush.

So what it will do for Colors is to strengthen our primetime and to give us a fantastic funnel. And we’ve already seen that working with Choti Sardari at 7:30 PM, where it’s open beautifully and it’s kind of double the slot that we were in. After that Shakti has grown thanks to that and right after Shakti we have this mytho. So we see right in the middle prime time growing for us hence moving into Ghatbandhan and to Bahu Begum.

Beyond ratings I just hope that the viewers love it they embrace it and become loyal viewers of our show. So we are putting to make it a sticky content.

One last question, what made you bring the entire media to Ayodhya for the launch of Ram Siya ke Luv Kush?

So we were talking about how can we make sure that we tell audiences that we’re very serious and true about what we do and the fact that if we are doing drama, and if we are doing Lord Ram, then there is no better way to start the journey from ground zero. We thought if we can pull this off in Ayodhya which is where Lord Ram was born and which is where he came back victorious and took samadhi from, then why not actually start this epic story from there. So to us also, it’s a start of a journey of sorts and the reason why we thought we’d bring you all here is to tell you that when Colors does something we totally believe in what we do and we believe that we are bringing to you a Ramayan that’s never been seen before like this.

We are very true to what we want to offer the audiences and hope that they embrace us because of our honesty, detailing and the care we take to bring to our viewers what we bring to them.

We are very happy to reunite and re-partner with Swastik and I think Siddharth is the king of mythology, for sure and if he’s doing something then I’m pretty sure that it will be a resounding success all over again.

Mumbai: Dainik Bhaskar Group has been at the forefront of innovation in the print industry during the challenging Fiscal Year...

McDonald’s launches TVC campaign with Rashmika Mandanna that will be aired in Karnataka, Tamil Nadu, Andhra and Telangana