by Editorial
in Featured, Think Through
Reading Time: 3 mins read
A A

OTT is next in line to claim the throne!

This debate over the next big medium of entertainment was getting contentious over time. The viewers have audaciously made their preferences known in the last couple of years, and they are seemingly not returning anytime soon. The linear TV is failing to make its mark post pandemic under the usurped regency of streaming platforms and online entertainment. 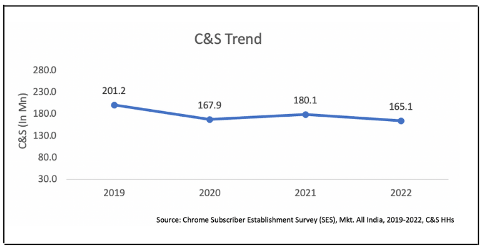 This is a global phenomenon where viewers are supposedly ‘cutting the cord’ on their cable and satellite subscriptions in favor of streaming platforms and online content. However, in India, where the data is recovered at an astoundingly low price, the growing shift of viewing preference from linear TV to OTT has been remarkably significant. In our recent findings from July report of Chrome DM Subscriber Establishment Survey (SES), we have noticed a substantial dip in Cable and Satellite (C&S) homes where the subscriber base has dropped from 201.2 million to 165.1 million households since 2019.

This ‘vibe shift’ should come as no shock to anyone from the cable and broadcast industry. The much-talked about phenomenon has seen another bifurcation amongst this viewing class, namely cord-cutters, cord-trimmers and cord-nevers. And as their names suggest, cutters are the ones who cancel or ‘cut the chord’ while the trimmers ‘trim’ their existing cable subscriptions to skinnier bundles or cheaper alternatives. But the most interesting ones tend to be the cord-nevers who are mostly urban dwellers. This section of viewers has never paid for any cable subscriptions and rely heavily on internet to gauge their entertainment needs. Broadly classified under the age group of 30 or younger, they are quickly becoming the most sought-after demographics for both advertisers and entertainers.

The reasons for such rise in OTT consumption are many. An integral one being the superior content library that eclipses the daily soaps on routine televised slots. The quality over quantity model was certainly put to good use where it gained early traction in urban pockets, and subsequently acquiring similar, if not more, popularity in rural India. The dubbing aspect has further driven the OTT market. It maintains a tested approach for media companies to localize an aspect within the ecosystem for an entirely new demographic. This kind of localization allows for an immersive viewing while also aiding in a sense of familiarity by lending a more culturally nuanced understanding of the plot and material at hand. The ‘Pan-Indian’ wave has also jumpstarted the rising demand for content from the southern markets across Hindi-speaking belts.

The biggest challenge for OTT drive in India remains in the limited internet penetration across rural India. However, the rapid digitization over the last couple of years illuminate a brighter future for the industry stakeholders. Even in our findings, Freedish was the only one to witness an upward jump by 5.4 %. This was in large part due to its market dominance in deep rural areas who still opt for free cable over any paid subscriptions.

In observation with such trends, many broadcasters have shifted their catalogue on streaming platforms, where much of their content are now made available within 24-hour cycle post its screening. Leading platforms like MX Player and Disney+ Hotstar offer exceptional content libraries that are completely free of any cost. This makes a huge impact on viewing preference for OTT over cable / digital subscriptions that are traditionally part of default TV apparatus.

In my humble opinion, this trend is only looking to continue further till the ‘streaming’ is cemented as the next alternative in this turn of transition. As it stands today, OTT will be the reigning champion. All hail to the new king!